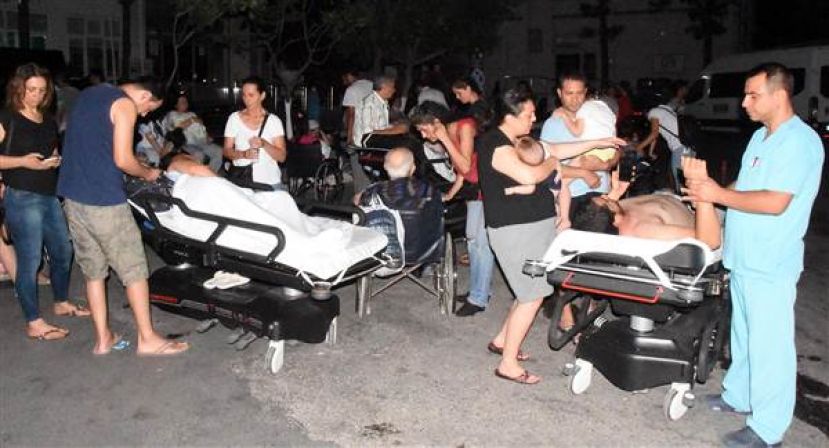 The quake struck about 6.2 miles south-southeast of Bodrum but most of the damage was recorded on Kos, which is southwest of Turkey's southeastern coast, according to the Associated Press.

The two victims were killed when a building collapsed on the island. It was not immediately clear if they were locals or tourists.

Kos has also helped bear the brunt of the on-going refugee crisis, as people make the treacherous journey across the sea from the Libyan coast to try to reach Europe. It was not clear if refugees were among the injured.

Greece's deputy minister of shipping and island policy said on state TV that most of the injuries are believed to be minor. The temblor has prompted a warning to avoid beaches.

"I saw everything shake. We really felt it. Everyone is in fear and out on the street," Elif Bereketli, 30, a journalist who was in Aydin province in Turkey, told NBC News by phone.

"We left the house after multiple aftershocks. There are probably more than a hundred people around me." Bereketli planned to spend the night outside rather than risk returning to the building.

Greek radio reported that two people were killed on the Greek island of Kos after a bar in an old building collapsed. The mayor of Kos confirmed the deaths to Reuters and said several other people were injured in the collapse.

A USGS seismologist said that people would have felt strong shaking and that items likely would have been knocked off walls. Videos posted to Twitter showed people fleeing buildings into the darkened streets, bricks knocked off building exteriors and people huddling under desks.

Sedat Zincirkiran, 62, was on a sailboat about 17 nautical miles from the reported epicenter when the earthquake struck.

"I felt a big kick on the boat from the depths. We ran to deck to see what was happening. It was really severe. It lasted about 30 seconds, and aftershocks keep happening,” Zincirkiran told NBC News by phone. "One is happening as I'm speaking to you."

Greece and Turkey lie in an especially earthquake-prone zone. Bodrum, in Muğla Province, is in southwestern Turkey. The quake occurred about 10 miles east-northeast of the Greek island of Kos. Guests at a hotel in Kos said the building was evacuated.

Mugla Mayor Osman Gurun said that power was out in certain parts of the province and that telephone operators experienced shortages because of overloads, according to Reuters. Bodrum Mayor Mehmet Kocadon said the earthquake caused minor cracks on some old buildings.

Smaller quakes of 4.4 and 4.7 magnitude were recorded near Kos in the hour after the larger earthquake, the USGS said.

The independent European quake agency EMSC warned people in Bodrum and Kos to avoid beaches. A sea-level monitoring station in Bodrum reported that the sea level rose by about seven-eighths of a centimeter after the quake.

Officials told Turkish broadcasters that large waves were more likely rather than a tsunami, Reuters reported.  by Phil Helsel and Saphora Smith