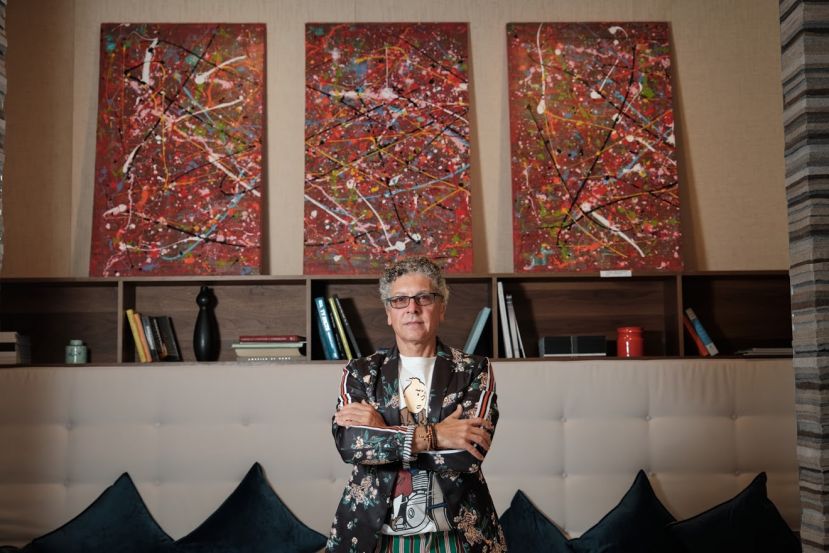 After graduation, he worked at Deutsche Bank and established a company that provides big data to hedge funds. Still, he has some shares at the company.

“The war in Beirut affected my art life deeply. They definitely became the drivers for my style and method today,” he says. He points out painting is not only hobby for him but also a deep passion.

Tony Şeker's art is dynamic and bursting with color. He is very active on the art scene with multiple exhibits each year and is the recipient of numerous juried awards. He participated in exhibitions in Hoboken, NJ, Soho, Utah and Piermont, NY. Lately he had an exhibition at Galerie Sonia Monti in Paris, France from December 2020 to March 2021 and he had an art show at the U.S. Chamber of Commerce building at TOA 5th Awards ceremony in November 2019.

He explained that leafing through an edition of the Guinness Book of World Records– another childhood pastime – he discovered that Lebanon held two world records: One of them is the largest bank robbery and the other one is the most car horns, or klaxons, sounded per minute per square kilometer. “As a kid I always enjoyed the sounds of Beirut,” he says.

At his abstract paintings, it is easy to see his childhood memories from Beirut. He points some car horns on one of his paintings which is exhibited at one of New Jersey’s skyscrapers. He smiles and adds: “I still remember those cars’ horns and this has affected my art as well. They were a strange mixture of street vendors chanting, cars honking and chickens clucking, but somehow, they seemed to combine to produce a fantastic symphony. I felt that the sound ran in parallel to my artistic expression – loud, colorful, and all-embracing.”

He visited Beirut twice in 2006 and 2016 and spent some time at the places he spent his childhood. He found a photography film among the abandoned items at his family’s old apartment. The audio was fine but the image was damaged. It reminds him of his childhood and his eyes shine with joy while talking about it.

More in this category: « Tony’s Art: Loud, Colorful, and All-Embracing