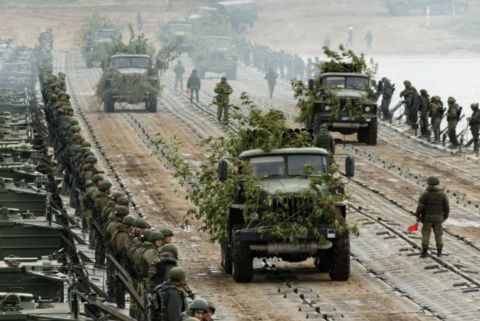 Ali Cinar interviewed three distinguished experts on Russian aggression in the region. US forces in Europe are on higher alert, citing "escalations of Russian aggression" in the area. President Biden spoke with Ukranian President Volodymyr Zelensky last week  and  "affirmed the United States’ unwavering support for Ukraine’s sovereignty and territorial integrity in the face of Russia’s aggression in the Donbas and Crimea,”

Moscow has pursued an aggressive policy in eastern europe and the Caucasus since at least its cyber attack on estonia in 2007. Western response to the Kremlin War on Georgia and seizure of Crimea was late and weak, which only encouraged further aggression in donbas and provocations elsewhere.   Finally, after the shootdown of mh17 in the summer of 2914, the EU joined the  U.S. in placing punishing sanctions on Russia for its  aggression in Ukraine. And by the fall of 2015, the U.S. began to provide significant military aid to Ukraine and in late 2017, javelins, tank killers.  In other words, it took years for the west to develop a sensible,  strong policy to thwart kremlin revisionism.

President Biden understands this and that is why he mentioned Moscow’s aggression in Ukraine in his first call with Putin. His administration moved smartly this past week with phone calls from the whole national security team to Kyiv expressing support for Ukraine in the face of Russia’s military buildup in northern Crimea and along Ukraine’s eastern border.  This was a timely warning to Moscow not to escalate its aggression against Ukraine.

Regarding Crimea, the U.S. has a sound policy in place, the Pompeo doctrine.  That is a policy of non-recognition of Moscow’s illegal control there, and sanctions for firms operating there. The point is to raise the price on the kremlin for its aggression.

To contain the kremlin in Ukraine and the broader black sea region, the U.S. should work to enhance cooperation among its NATO  allies and friendly countries such as Ukraine,Georgia and perhaps Moldova.  Washington should promote joint exercises and eventually contingency planning.

I am looking to Putin’s actions in Georgia in 2008 as a guide: Russian media and social media in occupied Donbas has been telling those citizens that Ukraine is about to “invade” Russia’s occupied territories. This is what Russia said about Georgia in 2008 as an excuse to invade them. Also in 2008 the world was focused on the Olympics, while this time the west is focused on Easter (Ukraine and Russia celebrate in May)

The US is already in a different position: US advisors are on the ground in Ukraine and are able to travel wherever they need to (President Obama prevented them from traveling east of Kyiv) Also, the flyover and naval deployments to the Black Sea are a regular part of the US schedule now. U.S. will be able to report themselves what they see happening and be able to counter Russian disinformation narratives, In the next 3-5 months we expect a US ambassador on the ground in Kyiv and a special negotiator from the US appointed to replace a Volker

We’re at a critical point this week with Russia’s bulldup. If nothing escalates in the next 2 weeks, we go back to the status quo. Putin is trying to gain leverage in international negotiations: Nordstream, sanctions relief, Ukraine getting closer to NATO

Ayla Bakkalli, Representative of the Mejlis of the Crimean Tatar and Advisor, Permanent Mission of Ukraine to the United Nations on Indigenous Matters Member of the World Congress of Crimean Tatars,

Ukraine’s historical nemesis Russian Federation has resurrected its familiar post-soviet aggression once again with the increase of military build up on its border. What are the grounds for this unprovoked action as Russia is flooding Crimea trains full of tanks and military build up in Eastern Ukraine and the increase in the militarization of the Crimean Peninsula of Ukraine has prompted Ukrainian to meet up with the meet up

Sec of State Antony Blinken and Ukrainian FM Dmityr Kuleba, US Chiefs of Staff Mark Millie speaking with his Ukrainian counterpart Mr. Ruslan Khomchak . I believe Mr. Mark Millley also speak with first deputy Minister of Defense of Russia, Valery Gersimov and , between US National Security Advisor Jake Sullivan and Head of the President of Ukraine’s office , Andrew Ermak.Pentagon Spokesperson John Kirby brought it up the topic on the military build up with its NATO allies.

General Wesley Clark, former Supreme Allied Commander of NATO was the feature speaker alongside with the Defense Attache of Ukraine, Major Volodymyr Havrylov  at a virtual panel hosted by Manor College several weeks ago on March 18, discussed the systematic aggression of Ukrainian sovereign lands.

A human face to the militarization with the continual persecution of Ukraine’s indigenous people the Crimean Tatars and Ukrainian activists have become the occupiers target. Again, Russia continues its hybrid occupation with a hybrid deportation strategy. To date, based on Ukrainian statistics 50,000 have left Crimea to the Crimean mainland.

Crimean Tatars remain locked down fearful that their father, brother, son, husband will be the next target.  Most of the people who are imprisoned for political reasons in Crimea are innocent Crimean Tatars and Ukrainian activists.  International community should rethink: