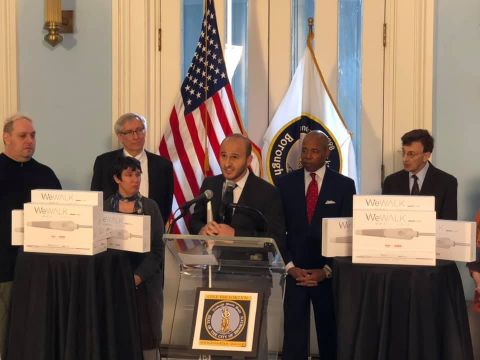 By Ali Cinar-New York - Brooklyn Borough President Eric L. Adams joined the representatives from WeWalk — developers of a “smart cane” for the visually impaired — to demonstrate the first-of-its-kind technology to Brooklyn and to announce the launch of a pilot program for clients of Helen Keller Services for the Blind, a non-profit organization based in Downtown Brooklyn helping people of all ages who are blind or visually impaired, and students from Lighthouse Guild, an organization dedicated to addressing and preventing vision loss. The technology, which was developed in Turkey through the non-governmental organization (NGO) Young Guru Academy (YGA), facilitates the world’s first open platform “smart cane,” which features security LED lighting, integration with mobile apps such as Google, Lyft, and Uber, and voice-command capability.