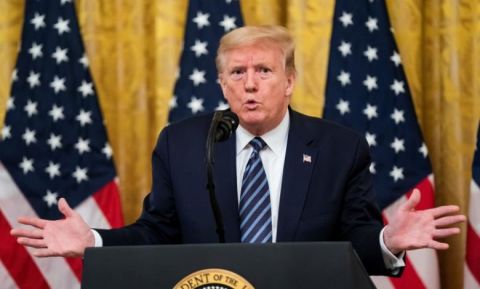 President Trump stated that he saw convincing evidence that the Coronavirus originated from China’s Wuhan Institute of Virology. While not providing details about that evidence, Trump said, “Either China failed to stop the virus or allowed the virus to spread.”

President Trump spoke about the Coronavirus at a White House event attended by the elderly, one of the at-risk population groups most affected by the virus. When Trump began to allow questions from the media, the event, which was held at a time that the Trump administration was considering various anti-China measures, was transformed into a press conference.

“China either failed to stop the virus or allowed the virus to spread.”

Asserting that there are varying theories about the origins of the Coronavirus and how it began to spread, Trump said: “China either failed to stop the virus or allowed it to spread.”

The U.S. President said, “There are varying theories about this matter. We are considering this from both scientific and intelligence perspectives. Was it a mistake? Was it accidental?” and suggested that answers to these questions would soon be forthcoming.

“China is a smart nation in scientific terms and in a lot of other ways, and they could have stopped the spread of this virus,” said President Trump, adding that China did not want to see him elected for a second term.

“The World Health Organization is acting as China’s PR Agency.”

During the press conference, Trump again voiced his criticism of the World Health Organization (WHO) with statements such as, “It’s as if WHO is serving as China’s Public Relations Agency” and “They should be ashamed of themselves.”

Possible measures that could be taken against China under consideration.

The Trump administration is considering possible measures to be taken against China as a response to the coronavirus outbreak. Along with the economic sanctions currently being discussed is talk of lifting China’s statutorily granted sovereign immunity, which would open a path to American court cases seeking compensation based on damages. President Trump has also announced that they are considering imposing additional taxes on China.

In a statement he gave on Wednesday, American Secretary of State Mike Pompeo  said that China was not permitting the U.S. to access its Wuhan laboratory.