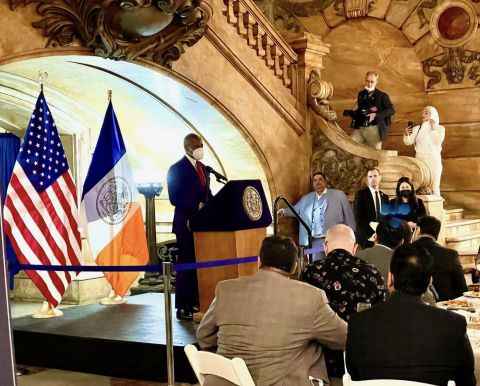 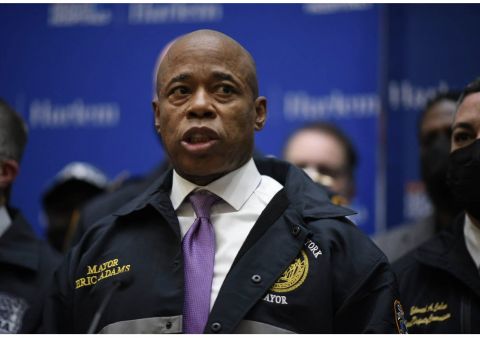 The ever-increasing number of gun assaults in New York is threatening the security of the city. Armed violence, which has increased during the pandemic, is driving authorities to take new measures.

Mayor Adams, who was chief of police at the New York Police Department (NYPD) for almost 20 years, stated that they would implement a series of measures to stop armed violence in the city, following an incident of armed conflict last week when one police officer died and another was seriously wounded.

Mayor Adams highlighted that five police officers died in armed attacks in January and said they would ask the federal government for help to stop armed violence in the city.

Mayor Adams stated that the police in New York were pulling out all the stops to prevent armed attacks in the city but that they could not prevent weapons from being brought into the city illegally. Following the statement made by Mayor Adams, it was announced that another police officer, who had been seriously wounded, had also died.

"Five times the number of weapons we confiscate are being sent into the city."

Mayor Adams stated that they had captured a large number of weapons brought into the city through their operations in New York. He said,  "The New York Police is doing its job and capturing thousands of weapons on the streets, but, despite this, the number of weapons in the city is not decreasing. We're capturing the weapons, but they're being sent out again. The federal government needs to prevent the trafficking of firearms to New York. If we don't work together and go after the arms dealers who are supplying the big cities in the U.S., such as New York, we will lose this battle. The federal government needs to step in and prevent the weapons from being sent to New York. We have to stop the flow of weapons into the city. We are capturing thousands of weapons on our streets, but five times more weapons arrive for each one we confiscate. This is not acceptable. There aren't any arms manufacturers in New York. We don't manufacture weapons here. The weapons are being shipped to New York from different places across the country. Even if we capture thousands of weapons off the streets, they will still find a way to bring new weapons into New York. Washington needs to help us and take action now to stop the flow of arms into cities such as New York."

"Patrols and checks will be increased."

Three weeks after taking office, Mayor Adams also announced his new plan to combat the increasing violence in the city. Adams stated that they would be increasing police patrols in the city and taking new measures to prevent the entry of weapons into the city.

Adams, who likened armed violence to a public health crisis, said, "We don't have any more time to wait; we need to take action. We need to prevent the factors which are feeding this bigger crisis. We will concentrate on the 30 regions where 80 percent of the armed violence in the city takes place. We will conduct more sensitive policing in these regions. More state and federal resources are needed in order to be able to implement this plan. We will cooperate both with the state police and the FBI to prevent the entry of weapons into the city. We will increase searches at the entry points into the city. We will increase spot-checks at coach and train stations, tunnels, and highways. We will work in coordination with the FBI and our other federal partners in order to hunt down arms smugglers. We will also increase the number of civil police officers on duty in the city."

New York Police Commissioner Keechant Sewell announced that a second police officer, who had intervened in a domestic violence incident in Harlem last week, had died. Police Commissioner Sewell said, "It is with great sadness that I am announcing the death of Police Officer Wilbert Mora. Wilbert sacrificed his life to protect those of others. He is even giving life to others after his death by donating his organs."

After being sworn into office, Eric Adams, the new mayor of New York, the largest city in the U.S. with a population of around 9 million, sped up the process to return the city to its former peaceful days.

Having served as the chief of police in New York for years, Adams appointed Keechant Sewell, a black person like him, as the first female New York City Police Commissioner. At today's joint press conference, the governor of New York, Kathy Hochul, and Mayor Adams announced that they would do whatever it takes to establish safety and restore the city to its peaceful days.

Governor Hochul and Mayor Adams announced that they would start with the subway for the city's safety. To prevent the crime that has been increasing in the last two years in NYC subways, the first step will be to beef up the police patrols underground and to deploy health professionals to get the homeless living in subways due to the pandemic the city has been grappling with for the last two years into shelters.

Hochul and Adams noted that the most important element of their new strategy to increase the ridership of the NYC subway, which has seen a drop in the last two years due to lack of safety, was to make the riders feel safe again. Mayor Adams said the police presence was crucial for safety, adding, "Since the riders do not see the police officers, they think the subways are unsafe, but they will see the officers from now on." Sewell, the first female Commissioner of the New York Police Department, stated that the new measures would significantly increase the visibility of the police officers in subways. "Our cops will be more visible in subways and talk to the riders. We will talk to the riders, saying 'Good morning!' to them and asking how they are and how their day is going," she added. "We will hear them and reply back."

Governor Hochul and Mayor Adams stated that, instead of the police officers, trained mental health professionals and social workers would take the homeless to the shelters.

New York Mayor Adams said, "The state laws prohibit the police officers from removing the homeless from public transportation by force. We want the New York police to help the homeless. However, the members of the parliament should review the outdated law. There is no separation between the subway system and the streets above."

Mayor Adams, also a victim of police violence, said, "Do not be abusive and unfair to the community. I promise to protect you, as long as you protect the community. But, I will not let abusive police officers hurt their fellow officers."

The current number of passengers in the New York subway is down by 50% compared to the pre-pandemic level. New Yorkers do not find taking the subway safe due to the spiked crime rate in the last two years. In 2021, approximately 500 people were killed in New York. Gangs have gained more control in certain parts of the city. City-wide crimes, including armed assault, extortion, theft, and looting, have increased compared to the previous years. In the last two years, the pandemic and the spike in crime rates have caused many people to move out of New York. New Yorkers are hopeful about the city being safe again with their new mayor, a former police chief, and their first female police commissioner being on duty.