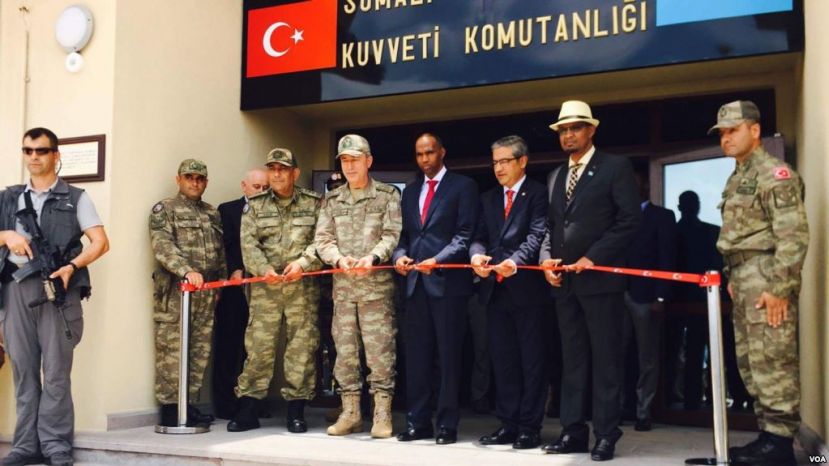 Somali Prime Minister Hassan Ali Khaire and the Chief of the Turkish military, General Hulusi Akar, in Uniform, along with Turkish Ambassador to Somalia, Olgan Bekar, jointly cut the ribbon for the inauguration of Turkey’s largest foreign military base in

General Akar said the base is the biggest sign of how Turkey wants to help Somalia. “We are committed to help [the] Somali government, and this base will cover the need for building strong Somali National Army. And it is biggest sign showing our relationship.” Speaking at the inauguration ceremony, Prime Minister Khaire highlighted the significance of the training base for his country.

“Today our country goes to the right direction toward development and the re-establishment of Somali Army, capable and ready for the defense of their nations,” said Khaire “This base is part of that on ongoing effort.” More than 200 Turkish military personnel will train some 1,500 Somali troops at a time, according to Somalia’s defense Ministry. The Somali prime minister said it will manufacture an inclusive united Somali Army.

“This training base has a unique significance for us because it is a concrete step taken toward building an inclusive and integrated Somali National Army,” said Khaire. "My government and our Somali people will not forget this huge help by our Turkish brothers. This academy will help us train more troops."

The inauguration ceremony was held amid tight security around the base located in the Jaziira coastal area in southern tip of the capital. Hulusi Akar, the Turkish Army chief said, “the Turkish government would continue to support our Somali brothers until their country becomes militarily stronger."

Other diplomats who attended the event said the training is part of an international effort to strengthen the Somali National Army to a point where it can take over security responsibilities from African Union troops currently fighting al-Shabab militants. The African Union has said it wants to begin withdrawing troops from Somalia next year.

Prime Minister Khaire said the base also will help to defeat the extremism and the ideology that drives young Somali men into violence and terrorism. “To defeat terrorism and fight against the poverty, we have keep in mind that building our national security and eliminating corruption is the key,” he said. Somalia has a significant number of military personal, but they are ill-trained and poorly equipped. Last week, the government repeated its plea for world leaders to lift an international arms embargo.

The U.S. already had deployed dozens of American soldiers to Mogadishu, and their presence marked the first American military forces in Somalia, except for a small unit of counterterrorism advisers, since March 1994.

The United Arab Emirates also has a military facility where they train the Somali Army, which many politicians condemn for taking orders directly from UAE commanders.

“The good news is not only the opening of this training base but also ...that when Turkey trains our troops it will also equip them,” said Somali Military Chief, Ahmed Mohamed Jimale.

Al-Qaida-linked al-Shabab is attempting to overthrow the Somali government and install a strict form of Islamic law throughout the country. On Friday, 30 people were killed when al-Shabab militants stormed a Somali military army base in the town of Barire, 47 kilometers southwest of Mogadishu.

More in this category: « ‘Turkey Has A Big Role to Play’ in Syria, US Secretary of State Tillerson Says Turkey Cancels Justice Ministry Visit to U.S. Due to Visa Row »