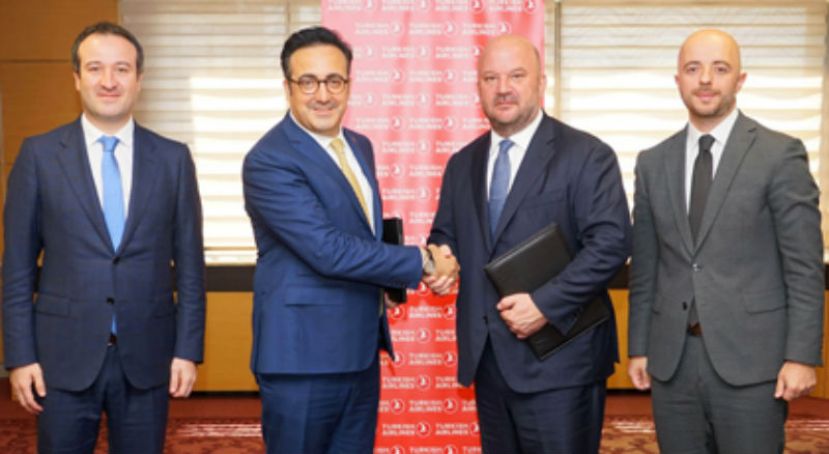 Turkish Airlines signed a significant deal with American Express Global Business Travel (Amex GBT), one of the world's leading agencies for corporate travel. With this agreement, signed by Turkish Airlines Chairman of the Board and the Executive Committee, M. İlker Aycı, and Amex GBT’s Board Chairman, Greg O’Hara, within today, Turkish Airlines expands its existing collaboration with AMEX to a global partnership, which was on regional scale between 2014-2017 and including just Europe, North America and Asia / Pacific regions. The global carrier who has added the "South America" region to the new joint service area with Amex GBT, will also become one of the airlines supported by Amex GBT at the top level, within the scope of this expanded agreement.

It is aimed to determine a common strategy on a global level and to increase the cooperation between the managements of both parts at all levels along with this expanded partnership. Another goal at this point is to increase the cooperation in product development and sales for "Marine & Offshore", "Travel and Lifestyle Services" (TLS), and "Meeting & Events" segments. Promotion of Turkish Airlines’ brand awareness and perception within Amex GBT organization, as well as top level participation in all global events organized by Amex GBT, increasing the visibility of Turkish Airlines in Amex GBT’s communication channels, acquiring new corporate customers through the joint data analysis studies, and also the promotion of sales activities are all the other subjects to be improved within this new business partnership, according to Turkish Airlines.

Commenting on the agreement M. İlker Aycı, Turkish Airlines Chairman of the Board and the Executive Committee said; “As Turkish Airlines, we are very pleased to enter such an important business partnership with Amex GBT. With this new agreement, which was existed on a regional scale and now expanded to global, we aim to increase our market share also in the corporate travel segment and to be the most preferred airline for all business travellers worldwide.”

Amex GBT, considered as one of the largest global agencies in the sector, has more than 100 years of experience in corporate travel. The global agency, which aims to make the business travels much easier, productive and less stressful, both in terms of suppliers and travelers, serves in nearly 140 countries around the world, with 12,000 employees, to 8,000 customers. (The FINANCIAL)