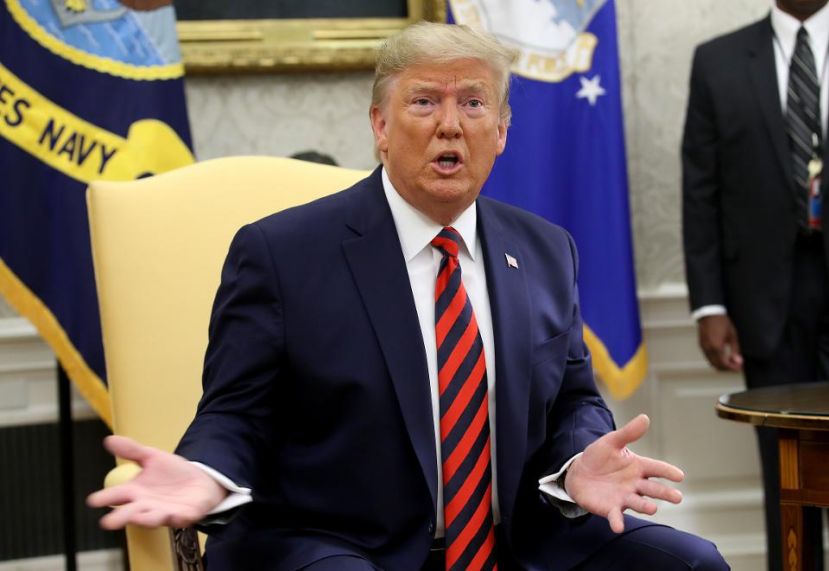 The hundreds of Iraqis attacking the U.S. embassy in Baghdad were not innocent "protesters," They were mainly members of the Iran-backed militias that, not least at the behest of the IRGC Quds Force Commander Qassem Soleimani, who was killed by U.S. strike.

President Trump threatened Iraq with the sanctions and a bill for billions of dollars if the U.S. is forced to withdraw its troops from the nation after the Iraqi Parliament. "If they do ask us to leave if we don't do it on an amicable basis. We will charge them sanctions as they've never seen before ever," President Trump said. Last night, there were strikes in the capital of Iraq, in which three rockets landed inside the heavily fortified Green Zone, US Embassy in Baghdad. Pentagon has announced that additional 3,500 troops are in progress to be sent to the region/U.S. have almost 60,000 troops in the Middle East. United States has 9 Military bases with 5200 US Troops.

"Iran has been nothing but problems for many years. Let this serves as a WARNING that if Iran strikes any Americans or American assets, we have targeted 52 Iranian sites (representing the 52 American hostages taken by Iran many years ago), some at a very high level & important to Iran & the Iranian culture, and those targets, and Iran itself, WILL BE HIT VERY FAST AND VERY HARD. The USA wants no more threats!"

"They attacked us, & we hit back. If they attack again, which I would strongly advise them not to do, we will hit them harder than they have ever been hit before!"

"The United States just spent Two Trillion Dollars on Military Equipment. We are the biggest and by far the BEST in the World! If Iran attacks an American Base, or any American, we will be sending some of that brand new beautiful equipment their way...and without hesitation!"

Secretary of State Mike Pompeo has appeared on many major TV outlets since Saturday. "We have developed a strategy to attempt to convince the Iranian regime to behave like a normal nation. We expect to achieve that goal. We will defend America." Secretary Pompeo said on CNN.

He was asked about the Iraqi Parliament's vote; Secretary Pompeo said on the CBS program "Face the Nation,": "It is the United States that is prepared to help the Iraqi people get what it is they deserve and continue our mission there to take down terrorism from ISIS and others in the region,

President Trump raised the prospect of targeting Iranian heritage/cultural sites Saturday in a tweet; however, many foreign policy experts objected to his tweet regarding targeting Iranian culture. As an example, Former U.S. Ambassador to NATO, Nicholas Burns, said President Trump's threat to destroy Iranian cultural sites would be a war crime under U.N. Security Council resolution 2347.

Secretary Pompeo has called his counterparts of Israel. Germany, Russia, China, Italy, France, UAE, and many other senior leaders globally regarding the U.S. recent operation in Baghdad.

"We strongly reiterate that turning Iraq into a conflict zone will harm peace and stability not only in Iraq but also in the entire region. Turkey has always been against foreign interventions, assassinations, and sectarian conflicts in the region."

French President, German Chancellor, and U.K. Prime Minister release a joint statement "We specifically call on Iran to refrain from further violent action or proliferation, and urge Iran to reverse all measures inconsistent with the JCPA. Also, NATO and US-led coalition Suspend Training Missions in Iraq After Soleimani's Killing

What to expect this week?

President Trump continues tweeting and speaking on Iran and Iraq. Additionally, Iran officials continue to criticize and threaten the U.S. regarding Soleimani's death. It is unknown what would be Iran's next step on U.S. however U.S. is ready to hit back harder if necessary. Gasoline is already up by about six cents a gallon in response to the escalation. We might see a negative economic impact shortly, globally. Iran could disrupt shipping through the Strait of Hormuz, which is the world's biggest oil chokepoint. There are about 21 million barrels of oil a day flowed through Strait of Hormuz per year.

The U.S. administration continues to pursue a robust program of sanctions against Iran and has issued 9 Executive Orders to implement Congressional legislation since 2011. Trump has an option to have more sanctions on Iran.

Cybersecurity is important since one of the Iranian groups hacked the website of the Federal Depository Library Program.

The relationship between the U.S. and Iraqi government is getting worse, so if the Iraq Government approves the resolution of U.S. troops leaving would be a disaster. This would be more an opportunity for Iran and many terrorist groups. Iran also announced its complete departure from the 2015 nuclear deal that would be bad news for the West.

With the nuclear agreement, the West was controlling Iran at some point. House Speaker Nancy Pelosi and many Democrats have been critical of Trump's decision to conduct an airstrike in Iraq that killed Gen. Qassem Soleimani. The House will introduce and vote on a War Powers Resolution to limit the President's military actions regarding Iran. Senator Tim Kaine introduced a similar resolution. Diplomatic channels are essential to reduce the tension, so many countries have a responsibility to talk to both sides.

More in this category: « Where Are The U.S.-Turkey Relations Heading? EUROPE HAS TO DO A BETTER JOB ON FIGHTING AGAINST TERRORISM »