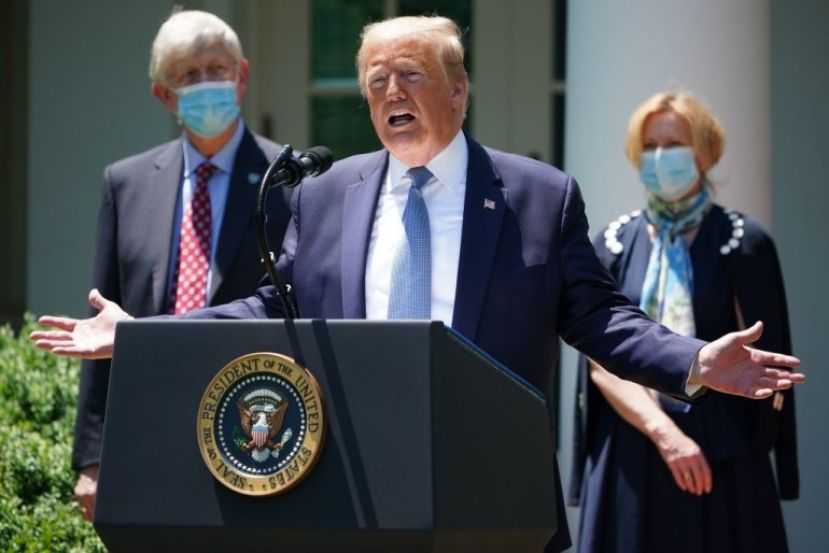 President Trump held a press conference at the White House on vaccination research.

President Trump pointed to the fact that almost all the states in the country have announced their normalization plans now, thanks to their testing capacities of up to 350,000 per day. Trump said, “Another important pillar of the normalization process of our country is the development of effective treatment and vaccines against the virus. We are looking to get it by the end of the year if we can, maybe before.”

President Trump said that various studies on the vaccine had been initiated as of January 11, the early days of the pandemic, and his government has been doing their best to support such studies.

Citing that his administration provided $10 billion to fund the research initiatives, President Trump said, “Today, we are starting a new project called Operation Warp Speed in the field of vaccination. In this way, we will make a massive scientific, industrial, and logistical endeavor unlike anything our country has seen since the Manhattan Project.” He said, “Its objective is to finish developing and then manufacture and distribute a proven coronavirus vaccine as fast as possible.”

President Trump stated that within the scope of this project, the Ministry of Health, the Centers for Disease Control and Prevention (CDC), the Food and Drug Administration (FDA), and experts from many institutions and organizations came together. He noted that the army would be used to distribute the vaccine to the country after its development.

'Hats off' to whoever develops vaccine First"

Noting that they had been working in collaboration with other countries to develop a vaccine, Trump said, “We have no ego on that matter. We are working with our allies and sometimes we are working with those who are not our allies.” He commented, “Whoever develops the vaccine, we think it’s great.”

“Vaccine or no vaccine, we are back.”

On the other hand, President Trump said, “And I just want to make something clear. It’s very important. Vaccine or no vaccine, we are back to normal. We are starting a process. And in many cases, they don’t have vaccines, and a virus or the flu comes, and you fight through it. And people sometimes, I guess—we don’t know exactly yet, but it looks like they become immune, or at least for a short while.”

Stating that the U.S. should not have a commitment to China or other countries at the supply chain point, President Trump said, “We have good relations with President Erdoğan now, but what if it breaks down? What are we supposed to do if they say that ‘we won’t be delivering the F-35 parts?’” he said.

Trump: I don’t want to talk to Xi right now. We might cut off our whole relationship with China.

Arguing that China is responsible for the COVID-19 outbreak and its becoming a pandemic, Trump said, “I am very disappointed in China. They should have never let this happen. So I made a great trade deal and now I say this doesn’t feel the same to me. The ink was barely dry and the plague came over. And it doesn’t feel the same to me.” Stating that the USA might cut off its relationship with China, Trump said, “There are many things we could do.

There will be an election in November, but Trump is not willing to face this given the existing financial scenario. During the last two months, 36 million people in the US have applied for unemployment benefits due to the COVID-19 pandemic. The unemployment rate in the country reached 14.7% in April. This number is expected to climb in the next few months. This is the highest unemployment level that the US has experienced since the Great Depression in the 1930s.