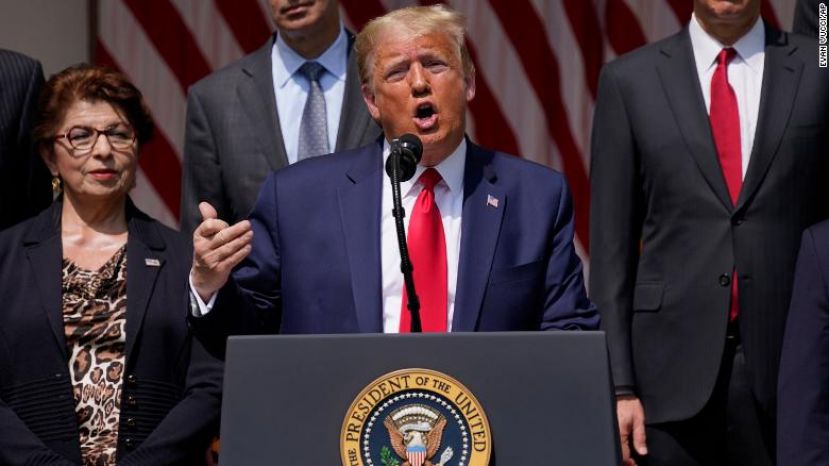 According to the data announced by the U.S. Ministry of Labor, the unemployment rate in the U.S. decreased by 13.3% in May. The decrease of the unemployment rate in May, which was recorded as 14.7% in April, was perceived as an unexpected positive development in the economic recession period caused by the coronavirus pandemic. New unemployment data were released following the surveys, showing that consumer confidence, manufacturing, and service sectors began to stabilize.

At the press conference held in the White House, President Trump evaluated the unemployment number and the agenda. Evaluating the unemployment number as “amazing,” President Trump said, “We had the greatest economy in U.S. history. And then this horrible pandemic hit the world. Tremendous progress is being made on vaccines. I also think we can have some very positive surprises in terms of treatment.”

Reacting to the states that have not started with the normalization yet, President Trump said, “I don’t know why some governors still continue with quarantine. Look at Florida, Georgia, and South Carolina, they have reopened, and they are doing a tremendous job.” Claiming that the best figures were achieved in terms of employment of African, Asian, and Latin Americans before the new type of coronavirus pandemic,

President Trump said, “The unemployment numbers announced today are a document of appreciation for equality in our country.” Stating that the economy was making a quick recovery, looking at the unemployment numbers released today, Trump said, “We were talking about a V-recovery of our economy, but now we can talk about a rocket-oriented recovery.”

About the steps taken for the African American population, Trump said, “My administration has done more for the Black community than any president.” Pointing out that the violent incidents in George Floyd’s demonstrations were largely suppressed, President Trump said, “We have a great army and National Guard. National Guard was barely used, but they helped the secret service at Washington a lot. The job they did at the White House is unbelievable.”

President Trump: “Covid-19 is a terrible gift from China!”

Stating that Covid-19 would have been prevented in China where it emerged, President Trump said, “Should we have not stopped flights from China, and we would have lost 2.5 million lives. We closed our economy. So, we’re at 105,000 lives now. Europe also closed its economy. Europe became acutely infected by the virus that came from China.

President Trump added, “China never had a dominant economy. It is not going to happen.” Pointing out that airlines and travel companies have begun to get back their old customers in the U.S.,”

Pointing out that the world is seeking answers for some questions about China with the threat of sanctions on the issue of Hong Kong, President Trump emphasized that they had seen the damage caused by the foreign dependency of the U.S. supply chain during the pandemic. Trump reported that he also ordered his financial markets working group to address the actions of Chinese companies in U.S. financial markets.

President Trump said, “The last steps taken by China show that Hong Kong is no longer an autonomous region. China changed its formula of ‘two systems, one country’ to ‘one country, one system.’ So I order my administration to begin eliminating Hong Kong’s political privileges.” Trump added that “The USA will take the necessary steps to impose sanctions on the officials of China and Hong Kong who harm the autonomy of Hong Kong.”