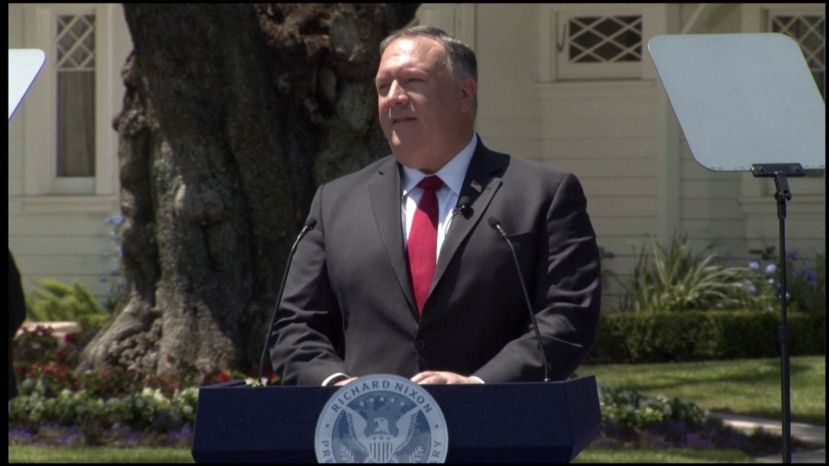 The U.S. Secretary of State Mike Pompeo made a comprehensive and tough speech about China in the Richard Nixon Presidential Library in Yorba Linda City of California . In the speech titled "Communist China and the Future of the Free World", Pompeo directly addressed the Chinese Communist Party and Xi Jinping, and said that if necessary, a new alliance could be established against Beijing.

Secretary Pompeo stated that "As Chinese Communist Party did not keep its promises it gave to the world, we are now counting deaths by sitting with masks on our faces; we also read social pressure news from Hong Kong and Sinkiang. We see the terrible statistics of China's commercial abuse that has hit American employment and companies. And we're watching a Chinese military that grows stronger and stronger, and also more menacing," he said.

"The old paradigm has collapsed."

"What does the American nation have to show after 50 years of dialogue with China? Have the theories of our leaders on China would evolve into freedom and democracy come true? Is this how China defines the "win-win" situation? Is America safer?" asked Pompeo, stating that the previous Chinese policy of the U.S. was of no use.

Secretary Pompeo, "If we want a free 21st century instead of China century that Xi Jinping has been dreamed of, we now have to accept the ugly truth that: The old paradigm which proposed a dialogue with China blindly has collapsed. We should not pursue this. We should not return to this approach. As President Trump suggested, we need a new strategy that protects the American economy and our lifestyles. The free world must triumph over this new tyranny."

"China bites the hand that fed them"

Stating that they opened their arms to Chinese citizens, Secretary Pompeo argued in return that the Chinese Communist Party exploited their free and open U.S. society. Secretary Pompeo said that China is sending propagandist individuals to press conferences, research centers, high schools and university campuses, and even parents' meetings.

"Whatever the reason, today, China is increasingly authoritarian at home and more aggressive in its hostility to freedom everywhere else," said Secretary  Pompeo. As President Trump has stated: Enough is enough".

Secretary Pompeo said, "Xi Jinping is a real follower of a failed totalitarian regime. Its ideology reflects a decade of longing for global hegemony that is based on Chinese Communism. Unless we allow it, China will not be exposed to the tyranny of Xi Jinping anymore inside and outside of the country."

Pompeo stated that the Department of Defense increased the number of freedom of navigation operations in the South China Sea and the Taiwan Strait. He also noted that a space force was established to deter China from aggression.

Secretary Pompeo "Communists always lie; however, the biggest lie is that the China Communist Party represents 1 billion 400 million people who it spies on, pressures and scares them into not talking." Quite the contrary. Honest opinions of the Chinese people scare the Communist Party much more than its foreign enemies.

More in this category: « President Trump: Wear a Mask Trump nominated for Nobel Peace Prize by Norwegian and Swedish Officials »