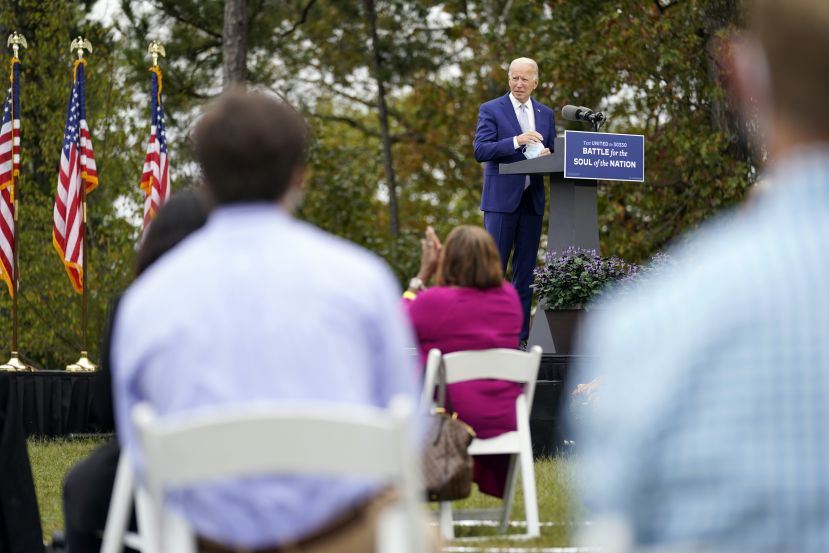 Biden, referring to the White House Chief of Staff Mark Meadows’ remarks on not being able to control the pandemic and the focus on vaccines and treatments, stated that, “This situation has revealed the shocking truth about the White House. They haven’t tried to tackle the pandemic.” He criticized the Trump administration by saying that “Trump has turned a crisis into a tragedy.”

Biden underlined the increasing number of cases in the mid-western states of the U.S. and warned that the situation might get worse as we approach the winter months. Biden said, “I will take action to get COVID-19 under control on the first day of my Presidency.”

Biden added, “The tragic reality of the period that we are going through is the fact that COVID-19 left a deep and permanent scar in this country” and accused President Trump of surrendering to the virus, not taking the pandemic seriously, and not paying attention to it.

“If we win Georgia, we win everything.”

Biden said during his campaign speech: "I cannot tell you how important it is for us to change the U.S. Senate. There is no state which is more important than Georgia... If we were to tell everyone there one year ago that Georgia would be this competitive, you would never believe it.”

Biden added: :"If you earn less than $400,000 per year, you do pay even one cent more as tax.  However, we will ask the richest and the largest companies, which constitute 91 of the largest companies that pay zero federal income tax, to pay their fair share.We will grant a tax discount for working families and middle-class individuals so that you can buy your first house, pay your health insurance premiums or child care, or care for your elderly loved ones."

Former President Barack Obama also visited the city of Orlando in the state of Florida to support Biden’s election campaign once more.

President Obama has said, “Trump stated that Russian President Putin, Chinese President Xi Jinping, and North Korean leader Kim Jong Un want him to win the election. We know that. This is because you have been giving them whatever they want for the past four years. Naturally, they want you to win.” In addition, he criticized President Trump’s relationship with these leaders.

President Obama also criticized Trump’s immigration policy and said, “I know that there are genuine conservatives here who are also kind-hearted, but there is nothing kind about immigrant children being taken away from the arms of their mothers at the border.”

President Obama criticized President Trump how he handles  COVID-19 Furthermore, Trump is jealous of COVID-19’s media coverage. More than 225,000 people died in this country. More than 100,000 small businesses have been shut down. Only in Florida, half a million jobs were lost. Think about this.

44th President Barack Obama is set to join Democratic presidential nominee Biden on the campaign trail in their first joint appearance on Saturday. President Obama and Biden will be in the key battleground state of Michigan on Saturday to "discuss bringing Americans together to address the crises facing the country,"

Biden is leading the Polls:

The last week of the candidates’ election campaigns coincided with a period where coronavirus-related concerns have started to escalate in the U.S.

More in this category: « NYPD Goes Purple on Domestic Violence Awareness Month This was an election of firsts »