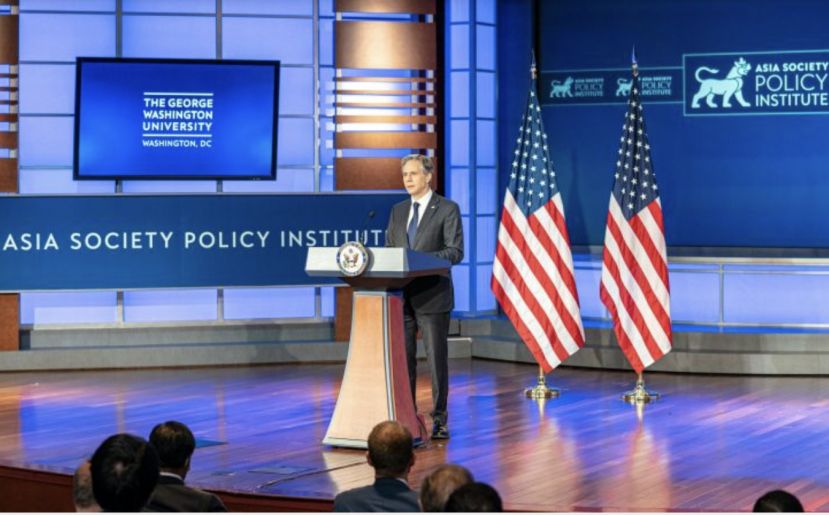 US Secretary of State, Blinken addressed outlining the Administration's policy toward the People's Republic of China at George Washington University.

Secretary Blinken stated that they would not recognize the independence of Taiwan and remain committed to their 'One China policy and said: "We're not looking for a Cold War or a conflict with China. However, the key sectors of the economy cannot be completely dependent on China. We will fight for American industry with every tool we have."

Secretary Blinken "To the contrary, we are determined to avoid both. Competition need not lead to conflict, and we do not seek it, and we will work to avoid it."

Secretary Blinken stated that the US would resist China's 'coercion that would jeopardize the economic system of Taiwan' and 'increasingly provocative rhetoric and activities' and said: "We remain committed to intensive diplomacy alongside intensive competition with China."
The US Secretary of State further stated that the US 'was ready to discuss their respective responsibilities with China, as nuclear powers.'

Secretary Blinken noted that they did not support the independence of Taiwan and said: "The 'One-China' policy of the US has not changed. However, despite the coercion and provocations of China, we will continue to expand our cooperation with Taiwan, consistent with our 'One China' policy.

Turk of America Journalist Ali Cinar picked the headlines from Biden's speech are as follows:

-The price of admission to China's market must not be the sacrifice of core values.

- China is a serious long-term challenge

-The key sectors of the 21st-century economy cannot be allowed to become dependent on China.

-We will fight for American workers and industry with every tool we have.

- We will align our efforts with our network of allies and partners, acting with a common purpose and common cause and harnessing these two key asset

-Competition need not lead to conflict, and we do not seek it. We will work to avoid it.