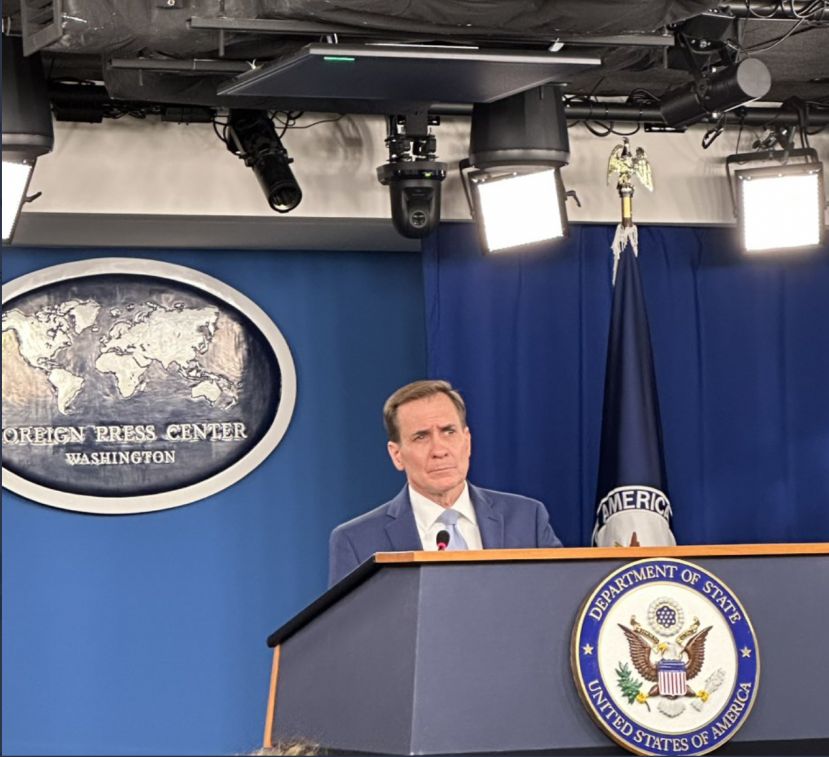 John Kirby had two press conferences, one at the White House and the other at the National Press Club, briefing American and foreign press correspondents regarding Biden-Harris foreign policy priorities.

Kirby was asked about the statements of Konstantin Vorontsov, the representative of the Ministry of Foreign Affairs of Russia, during the U.N. General Assembly, saying the commercial satellites of the U.S. could be 'legitimate targets' for Russia if the U.S. insisted on assisting Ukraine.

Kirby said that Russian President Vladimir Putin's waging war in Ukraine is 'provocative and dangerous' and stated, 'We will continue to support Ukraine openly and honestly. Nothing will change our attitude. I will just tell you this: Any attacks on U.S. infrastructure will be responded to.'

Kirby rejected the allegations of Republicans against Biden's blank check to Ukraine and said, 'We did not provide a blank check. We assisted as required.'

Kirby; Putin is  the leader of a modern nuclear power

John Kirby said that President  Biden has been very clear that there will be severe consequences should they do that, and it wouldn’t – it wouldn’t just be from the United States. He added that it would be from so much of the rest of the international community.

"We have to – we don’t consider that bluster. He’s the leader of a modern nuclear power, and we find it irresponsible and reckless to be using the kinds of language he is when he’s talking about the potential use of nuclear weapons. So again, I’m not going to telegraph here publicly what options the President might consider. I’ll – I think it’s best left in his own words, which is that there would be severe." he said at the press briefing

US and Allies continue to support Ukraine

"We continue to work closely with allies and partners throughout the continent with respect to what Russia’s doing in Ukraine, which is obviously devastating to the country of Ukraine, the people of Ukraine, particularly in recent days and weeks here where they have deliberately targeted civilian infrastructure and innocent Ukrainian civilians. And so we are working closely with allies and partners to make sure that we are helping Ukraine get the security assistance they need to defend themselves, and so that when – if and when this comes to a negotiated settlement, Mr. Zelenskyy can succeed at the table as well." John Kirby said.

More in this category: « The U.S. and its Allies say Russia is wasting the U.N. Security Council's time. Democrats Retain Control of the Senate »