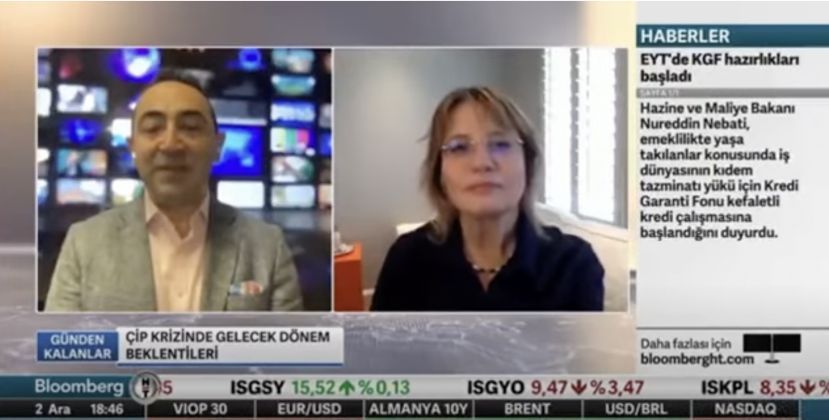 Turk of America Journalist Ali Cinar interviewed a prominent pioneer of technology Aysegul Ildeniz regarding the latest developments in the U.S Technology industry

Ayşegül Ildeniz, who worked as a Vice President at Intel, said that the chip issue is an essential strategic matter between the US and China. Ildeniz mentioned that due to a global shortage of semiconductors in 2021 caused by the pandemic, the U.S. economy suffered a loss of $240 million. Ildeniz stated that some Americans could not have cars and computers due to this shortage. She also said that another critical issue in the future would be China threatening Taiwan with its expansionist rhetoric.

In a Bloomberg HT interview, Ayşegül Ildeniz emphasized that "approximately two-thirds of the global semiconductor production is located in South Korea and Taiwan. The U.S. successfully designed chips, but U.S. could not lead the manufacturing position in this industry" Ildeniz added, "Ultimately, the U.S. Congress had to approve a crucial billion-dollar economic package to solve the problem of a lack of semiconductors and the supply chain issues." She emphasized that China invested roughly $600 billion into subtitles, education, R&D, and science.

Ildeniz said there were periodic layoffs in the tech sector and recalled the layoffs in 2001, 2008, and the early 2010s. Ayşegül Ildeniz stated that the number of people employed in the tech sector was 4.7 million before the COVID-19 pandemic, and this number has grown to 5.2 million today. She said that Amazon hired half a million people last year. She indicated that tech firms strive to engage the brightest minds and become competitive. She also said that with the danger of a recession looming in the near future, the firms put great importance on balancing. She reminded us that when there were layoffs, people who lost their jobs went into the business of start-ups to create a brand-new future for themselves. "Cutting-edge technologies have emerged in the previous fluctuations," Ildeniz said.

Ayşegül Ildeniz listed her suggestions to Turkish and Turkish American entrepreneurs: Try to solve globally scalable problems; focus on the problems of 8 billion people and on products and services that everyone can use; and prioritize macro-issues like health, the climate crisis, and energy. She also emphasized that AI and robotics studies are important, and it would be valuable to prioritize services and products related to these fields.
ociation.

About Aysegul Ildeniz: She is a pioneer in innovation, technology transformation and future vision in Silicon Valley and Istanbul, Turkey. She serves on the boards of Eczacibasi Holding and Zorlu Holding companies: Vestel Electronics, Vestel White Goods and Zorlu Enerji. She served as the Chief Operating Officer for Silver Spring Networks, a publicly owned worldwide leading technology company focused on internet of things and smart energy. Ayse had a successful career at Intel Corporation; last job being the Vice President for New Devices Group she is the chair of TUSIAD Silicon Valley Network and serves on the boards of Turkish Philanthropy Funds and American Turkish Society.

More in this category: « A Success Story in the U.S : Dr. Hande Özdinler