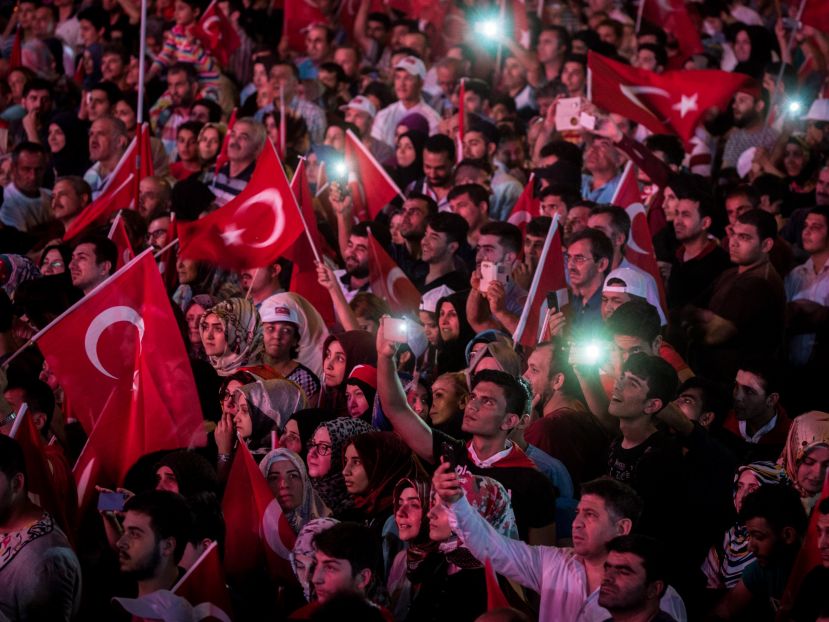 On the night the coup event unfolded, the events made little sense to those watching and the culprit was far from clear. People turned to the news to make sense of what was happening. Many lined up at stores and ATMs, unsure if the country would function the next day. Istanbul and Ankara residents took cover in their homes as they heard the unusual sound of sonic booms from fighter jets.

Heeding a call from the president, thousands of people took to the streets to stand up to the coup plotters. Some 250 people were killed and 2,193 injured. At least 34 coup plotters also died.

Based on reporting from that night, along with information from the state-run Anadolu news agency and the Turkish president's office, here is an account of how the July 15-16 coup unfolded (all times local):
July 15

A group of soldiers closes off two Istanbul bridges that connect the part of Turkey that's in Asia to the part that's in Europe, leading to a Friday night traffic jam and prompting social media speculation about a potential terror attack. Military jets are heard flying over the capital Ankara and shots are fired at army headquarters.

Prime Minister Binali Yildirim says in a live televised statement that a group within Turkey's military is attempting a coup.

Soldiers aligned with the coup attempt take over the state broadcaster TRT, where anchorwoman Tijen Karas is forced to read a statement announcing the military has seized power from a government "that lost its legitimacy." The statement cites autocratic rule and increased terrorism. It imposes martial law and curfews.

Holding a microphone to her smartphone, Hande Firat, an anchorwoman for private broadcaster CNN Turk, uses FaceTime to interview Erdogan live on air . He says a minority within the military has attempted a coup outside the chain of command. He says they were incited by Gulen's "parallel state," a reference to an alleged infiltration of state institutions by the cleric's followers. Erdogan calls people to assemble in the country's squares and airports, then connects to other channels using FaceTime to repeat his call to resist the coup.

People begin flowing into the streets across the country to oppose the coup attempt. The Directorate of Religious Affairs instructs mosques to recite a verse, usually read before Friday prayers, to alert and invite Muslims to the streets. Municipal buses and waste haulers barricade army barracks.

President Erdogan lands in Istanbul hours after departing a summer resort in Marmaris where he narrowly escaped capture and possibly an assassination attempt. He is welcomed by thousands of supporters. Earlier, all airports had been closed to aviation traffic and Istanbul's main airport seized by soldiers and tanks.

An official investigation is launched and detention warrants issued against alleged coup plotters linked to Gulen's network, including members of the judiciary and the military. Suspensions from public service and detentions are already under way.

A helicopter bombs the Marmaris hotel where Erdogan had been vacationing and nearly 30 soldiers and commando squads raid the hotel, killing two police officers. Erdogan had already left.

Bombs are dropped around the Presidential Complex in Ankara by the coup plotters.

Chief of Staff Hulusi Akar arrives at the Prime Ministry after being rescued. Akar was taken hostage at the outset of the coup attempt.

The government declares the coup attempt "decisively" put down. Millions gather across the country for a "democracy vigil" that goes on every night for nearly a month.


Postcript
Days after the coup attempt, an emboldened Erdogan declares a state of emergency that remains in place to this day. It has allowed the government to rule by decrees, bypassing parliamentary checks and balances, to bring down Gulen's network and other terror groups. Critics have called it a "civilian coup," institutionalizing a clampdown that was already underway.

More than 50,000 people, including a dozen opposition parliamentarians and around 160 journalists, have been arrested. Some 100,000 public employees have been fired for suspected links to terror, among them academics, teachers, police and military officers. Judicial and administrative paths for the jailed and purged to defend themselves have been severely curtailed.

To Erdogan's chagrin, the U.S. has not extradited Gulen and some NATO allies have granted asylum to alleged coup plotters. International criticism of the post-coup crackdown is rampant and Erdogan, more isolated than ever, has further polarized the country. AP

More in this category: « How Chobani Won the Greek Yogurt War with Experiential Marketing President Trump: This Is A Celebration »