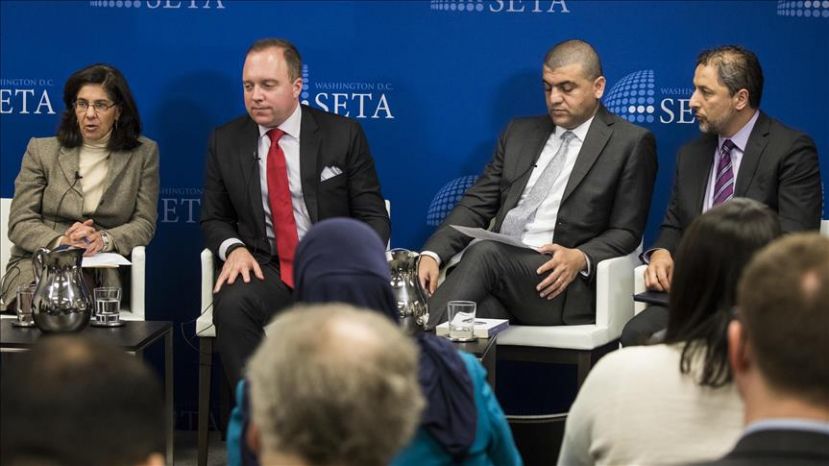 Ustun said if Bashar al-Assad remains in power, this would be a problem for the political process, especially for Turkey’s expectations. “The YPG continues to be one of the main problems in Turkish-American relations,” Ustun said. The PKK/PYD, also known as the YPG, is the Syrian wing of the PKK and has received U.S. support in the form of Special Forces back-up, air power and military supplies.

The U.S. use of the PKK/PYD in Syria has been a longstanding complaint for Turkey, which has been subjected to a decades-long terror campaign by the PKK, which is listed as a terrorist organization by Turkey, the EU and the U.S.

Earlier in the day, Hadi Bahra, a member of the Syrian opposition delegation, told Anadolu Agency that the opposition had demanded direct talks with the regime delegation on the political transition in Syria.

The UN-backed Syrian peace talks restarted in Geneva last week without the regime delegation. It joined the talks five days late on Monday without providing a reason.

The latest round of talks began on Nov. 28 with meetings between UN Special Envoy to Syria Staffan de Mistura and the opposition. The regime delegates conferred with de Mistura a day later.

This eighth round of peace talks will continue to Dec. 14.

The negotiations’ “four baskets” -- a new constitution, governance, elections and combating terrorism -- have been discussed as well as issues such as detainees, abductees, missing persons and humanitarian access.

An eighth round of peace talks aimed at ending the Syrian civil war will begin next week in Kazakhstan’s capital, Astana.

The talks, set for Dec. 21, will focus on cementing a cease-fire deal brokered by Turkey, Russia and Iran in December last year.

Syria has been locked in a vicious civil war since 2011, when the Assad regime cracked down on pro-democracy protests with unexpected ferocity. Since then, hundreds of thousands of people have been killed in the conflict, according to the UN.

More in this category: « Turkish-American Professor Named New Head of Engineering Department at MIT Betül Kaçar Invokes the Past in Modern Bacteria »