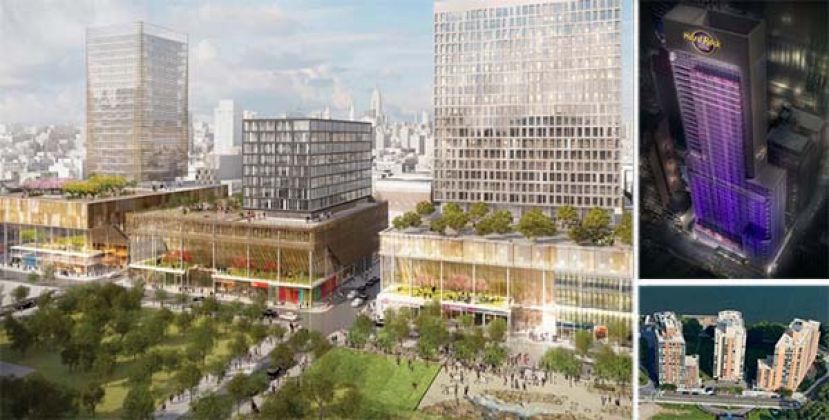 The largest new building proposed in July will be part of a 1.65 million-square-foot megadevelopment on the Lower East Side. The city’s department of Housing Preservation and Development filed plans last month for 202 Broome Street, a mixed-use building that will span 258,413 square feet, according to a permit application filed with the city’s Department of Buildings. L+M Development Partners, Taconic Investment Partners and BFC Partners are developing the 15-story project, along with the rest of the $1.5 billion Essex Crossing development, which spans 10 different sites.

A new rental project on Roosevelt Island closely followed the Broome Street building, ranking second among the top 10 permit applications for new buildings filed with the city last month, according to DOB data compiled by The Real Deal. Related Companies and Hudson Companies filed plans for 460 Main Street, a 253,974-square-foot residential building that will be the eighth to join the developers’ Riverwalk rental complex.
The top three projects, along with the sixth, were all in Manhattan. The remaining projects were split evenly between the Bronx, Queens and Brooklyn.

Here are the top 10 largest projects proposed in July:

1) 202 Broome Street, Manhattan
The new Essex Crossing building would include 83 residential units across 104,594 square feet, according to permit applications filed with the DOB. The project also includes 153,819 square feet of commercial space, most of which is dedicated to a public market. The second through fifth floors feature office space, while the market — called Market Line — will open on the lower floors.
2) 460 Main Street, Manhattan
The latest Riverwalk rental building is expected to rise 21 stories and include 341 units. The project is part of what will eventually be a nine-building complex, which will add roughly 2,000 new residential units on Roosevelt Island. The project is also near Cornell Tech’s 12-acre campus. Related and Hudson are building a 26-story apartment building as part of the campus.
3) 159 West 48th Street, Manhattan
Extell Development plans to build a 437-key Hard Rock Hotel between Sixth and Seventh avenues. The project is expected to span 207,121 square feet and rise 35 stories. Extell acquired the ground lease for the property in 2011 for $26 million. In June, the developer also bought 45,000 square feet of air rights, which the New York Post reported could bring the project to a total of 225,000 square feet (though that doesn’t seem to be the case, according to DOB documents).
4) 2006 Surf Avenue, Brooklyn
Development firm iStar filed plans last month for a 20-story, 208-unit apartment building in Coney Island. The project would span 186,578 square feet, including 8,772 square feet of commercial space. It’s part of iStar’s larger plan to develop the seaside neighborhood — three other buildings are planned at the complex, dubbed Surf Vets Place.
5) 985 Bruckner Boulevard, Bronx
Last month, affordable housing developer Community Access filed plans for a 215-unit residential project in the Longwood section of the Bronx. The 10-story building would span 138,190 square feet. The building is expected to be completed in 2019, New York YIMBY reported.
6) 132 West 28th Street, Manhattan
New Jersey-based importer-exporter Frank Ng plans to build a 32-story hotel in the Garment District. The 203-key hotel would span 232,198 square feet, according to documents filed with the DOB. In March, Isaac Chetrit’s AB & Sons filed a lawsuit against Ng, alleging that he backed out of an agreement to buy another Garment District building at 315 West 35th Street.
7) 9-03 44th Road, Queens
Sometimes dreams don’t come true. In the case of this Long Island City property, Barone Management scrapped plans for a 199-key Dream Hotel. Instead, the company is planning an 84,598-square-foot office building. Barone changed course last month, filing plans for a shorter building, one that will only rise three stories.
8) 79-40 Cooper Avenue, Queens
In 2015, Cayre & Sons Acquisitions paid $7 million for a 50,000-square-foot industrial building and surrounding properties. At the time, the Commercial Observer reported that the company planned to transform the building into self-storage and retail space. Last month, the company filed plans to build a five-story warehouse on the property that will span 75,966 square feet. Plans for the rest of Cayre’s sites were not immediately clear.
9) 23 Montieth Street, Brooklyn
Across the street from the 1-million-square-foot rental complex that All Year Management is developing in Bushwick, community nonprofit Los Sures intends to build an eight-story apartment building for senior citizens. The group filed plans for the 54,872-square-foot structure last month, which would hold 86 units. The apartments will sit across the street from 10 Montieth Street, the former Rheingold Brewery site that will be transformed into hundreds of new rental apartments.
10) 625 Bolton Avenue, Bronx
Los Angeles-based Turner Impact proposed a three-story charter school in Clason Point. The school is expected to be 50,001 square feet. The real estate investment firm scooped up the vacant lot in January for $3.5 million. The firm is leasing the site to Grand Concourse Academy Charter School.
By Kathryn Brenzel -  therealdeal.com

More in this category: « How Muc Do You Need to Afford A House in Your Area? Nearly $17B in EB-5 Funds Are Ready for Redeployment »