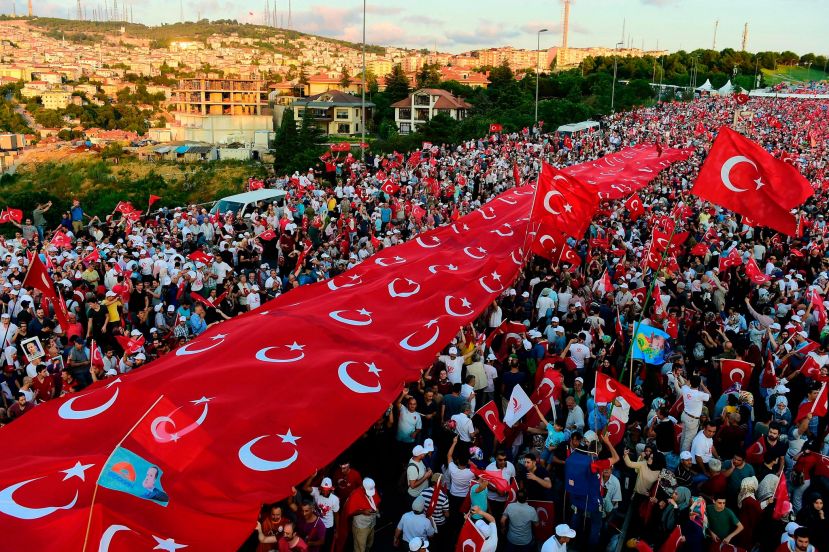 Yasin Akgul, AFP. Turks standing under a collection of Turkish national flags on Saturday in Istanbul.

ISTANBUL (AP) — President Recep Tayyip Erdogan vowed to “rip the heads off” of terror groups and coup-plotters who tried to end his more than decade-long rule on Saturday, as Turkey marked the anniversary of the country’s crushed military coup with a series of rallies and other commemorative events. Accompanied by his family and the families of the victims of the coup, Erdogan joined a massive, flag-waving crowd near the iconic July 15 Martyrs’ Bridge in Istanbul to remember 250 people who died on July 15, 2016 resisting the coup. He inaugurated a hollow, globe-shaped monument featuring the names of the victims near the foot of the bridge, before flying to Ankara to attend a special session in parliament at the exact moment it was bombed a year ago. He also opened a second memorial opposite the grounds of his palace in Ankara.

“Exactly a year ago today, around this hour, a treacherous attempt took place,” Erdogan told tens of thousands of people in Istanbul who converged at the bridge following a “national unity march.”

“The July 15 coup attempt is not the first attack against our country, and it won’t be the last,” he said, referring to a series of terror attacks that also hit the country. “For that reason, we’ll first rip the heads off of these traitors.”

The bridge was the scene of clashes between civilians and soldiers in tanks. At least 30 people died there and more than 2,000 were injured across Turkey in the struggle. Thirty-five coup plotters were also killed.

Photographs of the 250 “martyrs” were displayed on monitors and their names announced. Erdogan paid tribute to the victims saying they fought with their “bare hands” and “their faith” against the heavily armed coup-plotters.

Erdogan also told the crowd that he wants hundreds of people who are on trial for plotting last year’s failed coup to appear in court wearing the same type of outfit — similar to those that were worn by detainees at Guantanamo Bay. He also reiterated that he would approve a bill reinstating the death penalty if parliament proposed it.

Turkish soldiers attempted to overthrow the government and the president using tanks, warplanes and helicopters on July 15, 2016. The coup plotters declared their seizure of power on the state broadcaster, bombed the country’s parliament and other key locations, and raided an Aegean resort where Erdogan had been on vacation. But Erdogan had already left and the coup attempt was put down by civilians and security forces.

In the aftermath of the coup attempt, Turkey declared a state of emergency that has been in place ever since, which has allowed the government to rule by decree and to dismiss tens of thousands of people from their jobs. More than 50,000 people have also been arrested for alleged links to Gulen and other groups.

Addressing thousands of people outside of the parliament’s building, Erdogan said the country’s highest security advisory body would on Monday consider further extending the state of emergency. He said the failed coup had allowed Turkey to distinguish its friends from its foes but would not name the countries saying he wanted to avoid “a serious international crisis.”

In the latest government decree published Friday evening, 7,395 more state employees were fired, including teachers, academics, military and police officers, bringing the number of dismissed to more than 110,000. The government calls the crackdown necessary to purge state institutions of those linked to Gulen, but critics say the dismissals are arbitrary and the victims’ paths to recourse severely curtailed.

“It has been exactly one year since Turkey’s darkest and longest night was transformed into a bright day, since an enemy occupation turned into the people’s legend,” Prime Minister Binali Yildirim said earlier in the day at a special parliamentary session in Ankara, the capital, attended by Erdogan.

The U.S. State Department on Saturday issued a statement praising the bravery of the Turkish people who took to the streets to “preserve the rights and freedoms of their democratic society.”

“The preservation of democracy requires perseverance, tolerance, dissent and safeguards for fundamental freedoms,” the agency said, warning that curbs on those key freedoms erode “the foundations of democratic society.”

“More voices, not fewer, are necessary in challenging times,” the statement said.

NATO Secretary General Jens Stoltenberg paid homage to those who lost lives resisting the coup and said attempts to undermine democracy in any one of the allied nations was “unacceptable.”

July 15 has been declared a national holiday in Turkey. Tens of thousands of people were holding “democracy vigils” — similar to vigils held in the days following the coup.

More in this category: « World's No. 1 Certificate Authority Comodo Announces Upgrade Program for Symantec, Thawte and GeoTrust Certificates Turkish Companies Draw Bulk of Its Investment from US »