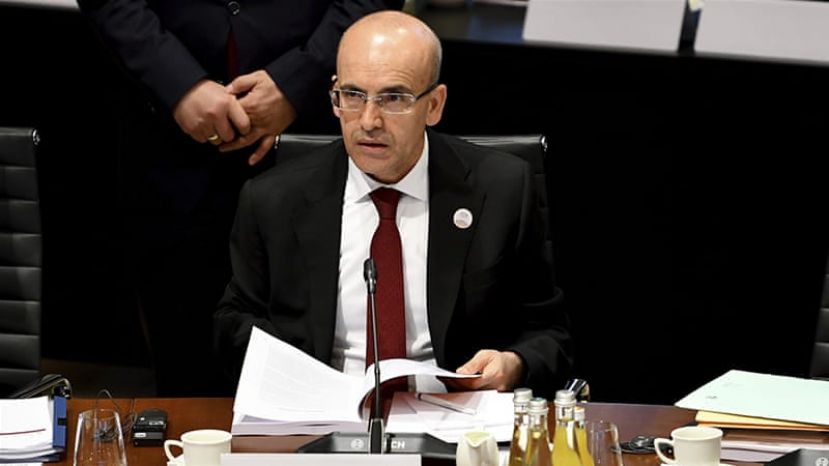 Tensions between the two NATO allies rose in recent days after the detentions of two locally employed staff prompted the United States on Sunday to suspend non-immigrant visa services at its embassy and consulates in Turkey. Hours later, Turkey issued a similar suspension on visas for US citizens.

US-Turkish relations were already strained over US military support for Kurdish fighters in Syria and the United States' unwillingness to extradite Fethullah Gulen, a former Erdogan ally whom Ankara views as the mastermind behind last year's failed military coup.

"We don't want this dispute to last more than a second," Simsek said at a briefing on US business opportunities in Turkey at the US Chamber of Commerce on Wednesday. He added Turkey is committed to "safeguarding" US government employees in Turkey.
READ MORE
What prompted the US-Turkey visa dispute?

Simsek's remarks contrasted with Turkish President Recep Tayyip Erdogan's statements on Tuesday that "agents" had infiltrated US missions in Turkey and that Ankara no longer recognised US Ambassador John Bass as a legitimate envoy.

Bass told reporters on Wednesday the US government had still not received any official explanation from the Turkish government for why the employees were arrested in Turkey this year.

US Secretary of State Rex Tillerson spoke with Turkish Foreign Minister Mevlut Cavusoglu on Wednesday and expressed his "profound concern" about the arrests, the Department of State said in a statement.

Tillerson also called on Turkey to present any evidence behind the accusations against the US employees, it said.

When a US Drug Enforcement Administration worker was detained in Istanbul last week, Erdogan's spokesman said the employee had been in contact with a leading suspect in last July's failed coup.

Since the abortive putsch, in which at least 240 people were killed, more than 50,000 people have been detained and 150,000, including teachers, academics, soldiers and journalists, have been suspended from work.

Simsek on Wednesday dismissed concerns expressed by some Western allies that the crackdown shows Turkey is slipping into authoritarian rule under Erdogan.

"Turkey is not doing arbitrary arrests. There are no political hostages. Give us the benefit of the doubt that Turkey's judicial system will work and is functioning," he said.

More in this category: « Western Union HQ moving from Douglas County to south Denver Blackhawk Modifications Teams with Sierra Nevada Corporation to Certify the XP67A for the King Air 350ER »