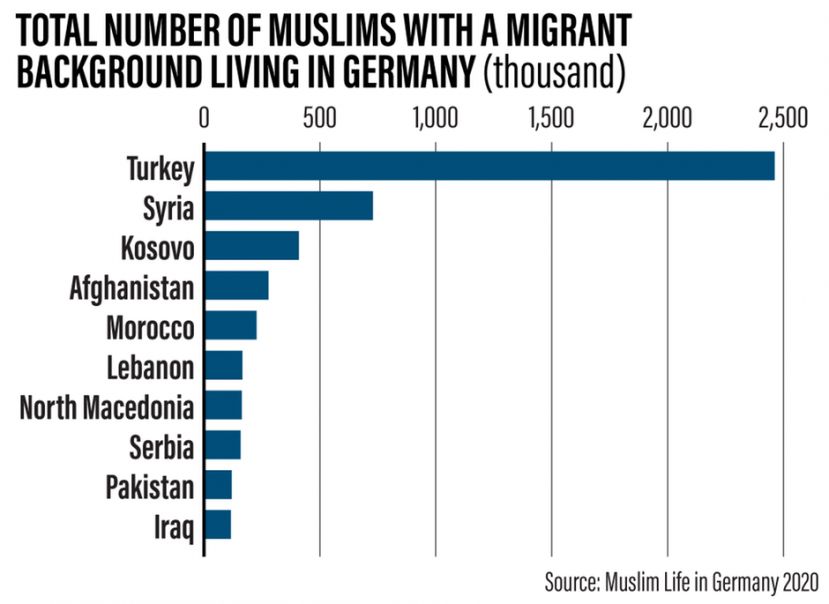 “Our analysis shows that the influence of religion on integration is often overstated,” said one of the report’s authors Dr Kerstin Tanis.

As recently as 2008, people with Turkish roots made up more than two thirds of Germany’s Muslim population. Many Turkish people migrated to what was then West Germany under a “guest worker” scheme during the 1960s and 1970s, and their compatriots and relatives now number about 2.5 million. But the Turkish communities grew little in recent years, which meant their dominant position was ended by migration from countries such as Syria. About 45 per cent of Germany’s Muslims are believed to be of Turkish origin, down from 68 per cent in 2008.

Syrians are the second-largest group, making up about 13 per cent of Germany’s Muslim population. Kosovo, Afghanistan and Morocco are also among the top countries of origin, followed by Lebanon, North Macedonia, Serbia, Pakistan and Iraq. There are thought to be about 16,000 Muslims living in Germany with roots in the UAE, Saudi Arabia or Yemen.

Dr Anja Stichs, a sociologist and co-author of the report, said the figures showed Germany’s Muslim population was becoming more diverse. “The life experiences of Muslims living in Germany are also correspondingly different,” she said. “Many of them migrated to Germany many years ago or were born in Germany. Nearly half of them have German citizenship. “But a growing number have arrived in the past few years and are still in the process of building their lives in Germany.”

Report says Germany’s Muslims are well integrated
Chancellor Angela Merkel’s decision to open Germany’s doors during the 2015 refugee crisis turned Islam and integration into a major political flashpoint. The far-right Alternative for Germany party surged into Parliament for the first time in 2017 after declaring that “Islam does not belong to Germany” and raising fears of “segregation by parallel Islamic societies”. Fears were also raised over whether government messages about the dangers of Covid-19 were getting through to migrant groups. However, the new report rejected the notion of “social isolation” among Muslim communities. The survey said 65 per cent of Muslims have frequent contact with friends with no migrant background. Another 21 per cent said they sometimes have such contact, and only 14 per cent said they never do.

In addition, many of those who do not have such relationships “show a strong desire for more frequent contact with people who have no migration background”, the report said. About 82 per cent of Muslims say they are religious, but researchers said this was less important for integration than other factors such as the length of time that someone has lived in Germany. Religious practices also varied. About 40 per cent of Germany’s Muslims said they prayed every day, but 25 per cent said they did not do so at all. In addition, the study found that about 70 per cent of Muslim women and girls in Germany do not wear a head covering.

Muslims value language skills but sometimes lag behind in education. Most Muslims in Germany – 79 per cent – say their German language skills are good or very good. Among those who were born in Germany, 93 per cent say they speak very good German. Despite this, many Muslims have fewer educational qualifications, partly because their schooling was often interrupted by fleeing their home country. About 16 per cent of Muslim adults do not have a school leaving certificate, compared to three per cent of those with no history of migration. Within migrant communities, the level of education is higher among younger generations who were born in Germany.

About 58 per cent of Muslims born in Germany had completed some kind of degree course or job qualification, the report said. First-generation migrants, who moved to Germany themselves, often face a particular shortfall in educational achievement, Dr Tanis said. “One example of this are the many people who recently migrated from the Middle East and had to break off their education,” she said.