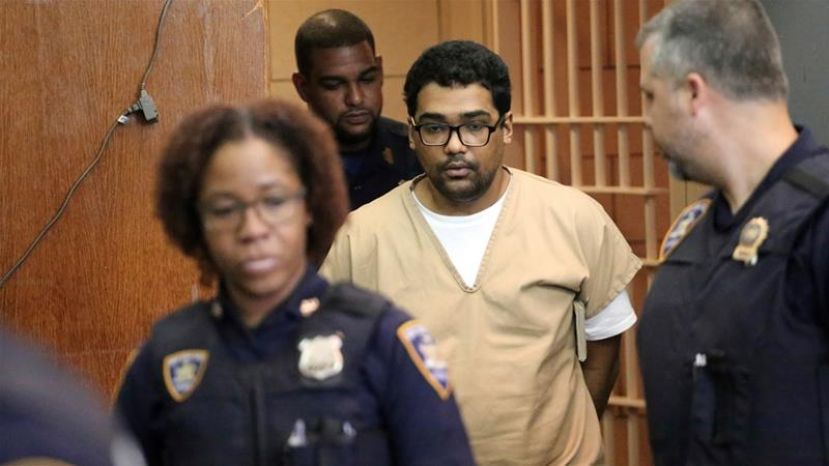 While serving in the Navy in 2013, Rojas spent two months in a military jail [AP]

Dressed in a beige jail uniform, Rojas mostly looked down at the defence table during his arraignment on Thursday for the May 18 melee.

Rojas, a Navy veteran, drove his Honda sedan down Seventh Avenue and made a U-turn, mowing down pedestrians on sidewalks before crashing, prosecutors said.

Alyssa Elsman, an 18-year-old woman visiting from Michigan, was killed, while 22 other pedestrians suffered various injuries, some serious. After the car crashed, the driver was subdued by onlookers and police as he tried to flee on foot.

The mother of one of the victims, high-school student Jessica Williams, who was badly injured, sat in court and cried during the brief hearing with two others, including a man who gave Rojas the finger as he left court.

Rojas' attorney said outside court it was a "terrible thing that happened".

"But how we handle this type of a case will determine how civilised of a society we are," said defence attorney Enrico DeMarco. Photographers snapped pictures of a wild-eyed Rojas after he climbed from the wrecked car and ran through the street waving his arms.

He later told police he had been smoking marijuana laced with the hallucinogen PCP.

According to prosecutors, Rojas said he wanted to "kill them all".

Rojas has several previous criminal convictions. He pleaded guilty shortly before the crash to harassment in the Bronx after he was accused of pulling a knife on a notary in his home. He also had two previous drink driving convictions.

While serving in the Navy in 2013, he spent two months in a military jail, though records do not disclose the reason.