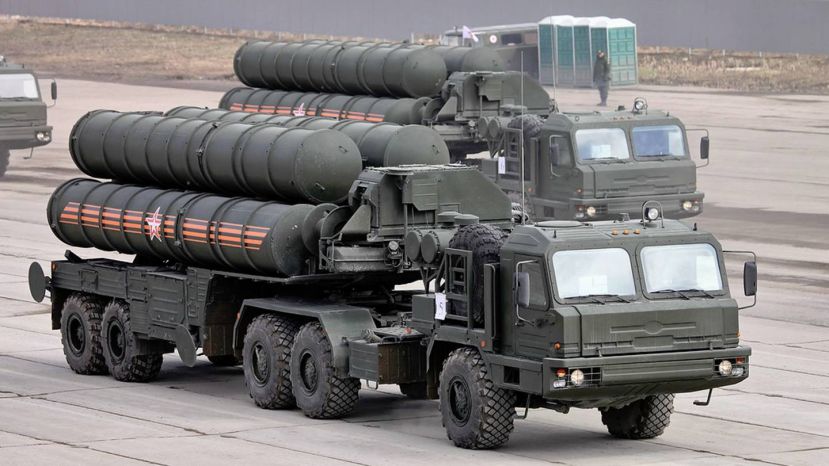 By Joseph Trevithick * - Turkey has reportedly signed deal to co-produce the S-400 surface to air missile system with Russia. The plan has already provoked criticism from the country’s fellow NATO members and could further strain its relations with the alliance. Turkish President Recep Tayyip Erdoğan made the announcement during a parliamentary meeting with other members of his Justice and Development Party, more commonly known by its acronym AKP, on July 25, 2017. Turkey and Russia have been negotiating the arrangement since November 2016 and Turkish officials reported these talks were in their “final stage” in April 2017.

“We have now taken steps with Russia about this issue. Deals have been inked,” Erdoğan told the AKP MPs. “In God’s will, we will see S-400 missiles in our country and precede the process with joint production.”

The S-400 Triumf is a road-mobile long-range surface to air missile system. Each self-propelled or semi-trailer-mounted launcher has four missiles, which have ranges up to 250 miles depending on the variant. Search and tracking radars, including those in the X- and L-bands, give the complete system the ability to spot and engage both short-range ballistic missiles and low-flying cruise missiles, according to the manufacturer Almaz-Antei.

Technology transfer and shared production have been core Turkish demands. As part of an overarching push for a self-sufficient domestic arms industry, Turkey has or is looking into production or co-production of fifth generation fighter jets and other military aircraft, tanks and self-propelled artillery, small arms, and more. We don't know the final price tag for the proposed S-400 deal and with declines in Turkish defense spending – it only budgeted approximately 1.56 percent of its GDP to defense in 2016, according to NATO, compared to more than the desired two percent in 2009 – the country may eventually have to scale back any final purchases.

It is also possible that the arrangement with Russia may ultimately include plans for a Turkish-specific derivative of the system, which NATO calls the SA-21 Growler, with unique features. All in all, the S-400’s capabilities make it a perfect anti-access/area denial (A2/AD) tool against enemy aircraft and missiles, which may worry both potential foes and friends, as Russia's own missiles in Syria already have done.

“Why will it cause tension?” Erdoğan questioned at the AKP meeting. “A country should be in search for the ideal ways for its own security.”

These particular remarks were almost surely pointed at U.S. Marine Corps General Joseph Dunford, the U.S. Chairman of the Joint Chiefs of Staff. Just days earlier, the American military’s top officer had rejected reports that Turkey was about to buy S-400 missiles and suggested it could be a problem if they did move ahead with the purchase.

“There was a media report that was incorrect,” Dunford said at the Aspen Security Forum on July 22, 2017. “They have not bought the S-400 air defense system from Russia. That would be a concern, were they to do that, but they have not done that.”

Ostensibly, American officials have been critical of the plan because the Russian system is not compatible with other NATO equipment and infrastructure. The alliance has various interoperability requirements for military gear in order to streamline operations among its members. A member state using non-standard equipment could potentially lead to command and control, logistical, or other problems during an actual conflict.

Erdoğan was quick to point out that Greece, another NATO member that his country has still had repeated skirmishes with over the past six decades, operates older Russian-made S-300 systems. What the Turkish leader failed to mention was that this only occurred because of his country’s near violent anger at Cyprus, which is not a member of the alliance, purchasing these weapons in the first place.

Since 1974, Turkey has supported an otherwise unrecognized independent country on the island known as the Turkish Republic of Northern Cyprus, which stands in opposition to the predominantly Greek southern portion. As part of its agreement to defend the ethnically Turkish population, the government in Ankara had threatened a preemptive strike against the S-300 batteries after they arrived in 1997. Ultimately, Greece agreed to take the missiles in exchange for undisclosed military equipment and monetary compensation. Cyprus subsequently obtained less capable and shorter range Russian-made surface to air missile systems.

To be fair, in 2015, Greece was reportedly looking to purchase new missiles and other services from Russia in order to keep its S-300 batteries operational. The bigger question in that case was whether Greece, hopping from one political crisis to another and suffering a severe budget shortfall, would be able to actually pay for the upgrade program. As of February 2017, those negotiations were reportedly still ongoing.

Regardless, in Turkey’s case, the purchase seems to be wrapped up in a number of long-standing issues, the most important being the desire to develop a domestic production capability for a long-range air defense system, which the country desperately needs. Since the end of the Cold War, the Turkish military has only become more and more aware of its limited anti-aircraft and anti-ballistic missile defenses.

As of 2016, the Turkish Air Force, which operates its short-, medium- and long-range surface to air missile systems was still using a mix of aging American MIM-23 HAWK and British Rapier systems, according to the International Institute for Strategic Studies’ The Military Balance for that year. It may still have had some number of even older MIM-14 Nike Hercules missiles at static sites.

With only these limited defenses, since 1990, the government in Ankara has requested the deployment of NATO members and their surface-to-air missiles – mainly Patriot systems – on no less than three occasions in order to bolster its own defenses against regional threats. Between 1990 and 1991, American forces brought Patriot batteries to defend against possible Iraqi Scud attacks as part of Operations Anchor Guard and Ace Guard. In February 2003, ahead of the U.S.-led invasion of Iraq, the Pentagon agreed to repeat the move as part of Operation Display Deterrence.

More recently, in 2013, the United States, Germany, and the Netherlands all sent Patriots to Turkey as part of Operation Anatolian Protector. Turkish officials requested the deployment primarily over concerns about Syrian Scud missiles. Spanish forces ultimately took over the NATO Patriot missile mission in the country, but the U.S. military continues to operate a secretive long-range AN/TPY-2 radar site.

At the same time, the country formally began looking to finally purchase its own such system as part of a competition known as the Turkish Air Force Long Range Air and Missile Defense System (T-LORAMIDS) program. Turkey quickly selected China’s FD-2000, the export designation for the HQ-9 surface to air missile system, as the winner in 2013. The weapon and its associated radar and fire control systems are visually and functionally similar to the Russian S-300V. The HQ-9’s missile have a reported maximum range of approximately 120 miles and, paired with the right sensors, can supposedly act as a limited ballistic missile defense system.

As with the new decision to buy the S-400, the Chinese missile plan prompted the same concerns from NATO and the United States. U.S. defense contractor Raytheon had submitted the theater ballistic missile defense version of its Patriot system, known as Guidance Enhanced Missile-TBM or GEM-T, while European consortium Eurosam had submitted its Aster 30. Raytheon reportedly lost out due to a inability or unwillingness to share the requisite amount of technology, while Eurosam’s option apparently proved too costly. Russia had also submitted the S-300 system, which would have been a close competitor to the FD-2000.

“We have conveyed our serious concerns about the Turkish Government’s contract discussions with the U.S.-sanctioned company for a missile defense system that will not be interoperable within – with NATO systems or collective defense capabilities,” Marie Harf, then Deputy State Department Spokesperson, told reporters on Oct 7, 2013, echoing many of the U.S. government’s concerns and objections to the new S-400 deal.

After nearly two years of immense pressure from the United States, Turkey yanked the FD-2000 deal in November 2015. Turkish President Erdoğan and other officials claimed the decision was so that the country could refocus resources on its own domestic development program. A year later, the country was in talks with the Russians about buying S-400.

Given General Dunford’s comments in Apsen, the United States undoubtedly hopes that renewed pressure will kill this new deal, but it seems the American government’s opinion is less likely to change the Turkish position now than it did two years ago.

In November 2015, Turkish F-16 fighter jets had just shot down a Russian Su-24 attack plane over Syria it looked like the two countries might end up in larger skirmish. Russia was adamantly opposed to Turkey’s support for Turkmen rebels fighting the regime of Syrian dictator Bashar Al Assad. Then in July 2016, the situation got stood on its head.

Members of the Turkish military, including fighter pilots who reportedly tried to kill President Erdoğan as he flew to safety in a VIP jet, attempted to overthrow the government on the night of July 15-16, 2016. Erdoğan and his supporters quickly blamed the coup attempt on self-exiled preacher and one-time ally of the AKP Fethullah Gülen. The Turkish government swiftly set about purging tens of thousands of suspected "Gülenists" from the military, other parts of the government, and state-run universities. In addition, Turkish authorities demanded the United States turn over Gülen, who is still living in Pennsylvania and remains an outspoken critic of what many see as an increasingly dictatorial regime.

U.S. officials say they would be happy to consider the formal extradition request, but that their Turkish counterparts have yet to provide conclusive evidence of Gülen involvement in the coup plot. The result has been a significant chill in U.S.-Turkey relations. Notably, in June 2017, U.S. authorities said they would charge members of Erdoğan security detail over what appeared to be a series of unprovoked attacks on individuals protesting the Turkish president outside the country's Embassy in Washington, D.C. the month before.

On top of that, as The War Zone has already reported in detail, Turkey’s concerns about ascendant Kurdish groups, which is sees as indistinguishable for domestic Kurdish terrorists, has only pushed it further away from the United States and closer to Russia. The U.S. military has gone so far as to deploy special operations forces to keep to peace between Turkish forces and their partners and Kurdish groups, which American officials see as an essential part of the fight against ISIS terrorists.

* By Joseph Trevithick - http://www.thedrive.com/the-war-zone/12841/its-official-turkey-is-getting-russias-s-400-air-defense-system
This email address is being protected from spambots. You need JavaScript enabled to view it.

More in this category: Growth in Turkey Hits 11.1 Percent »