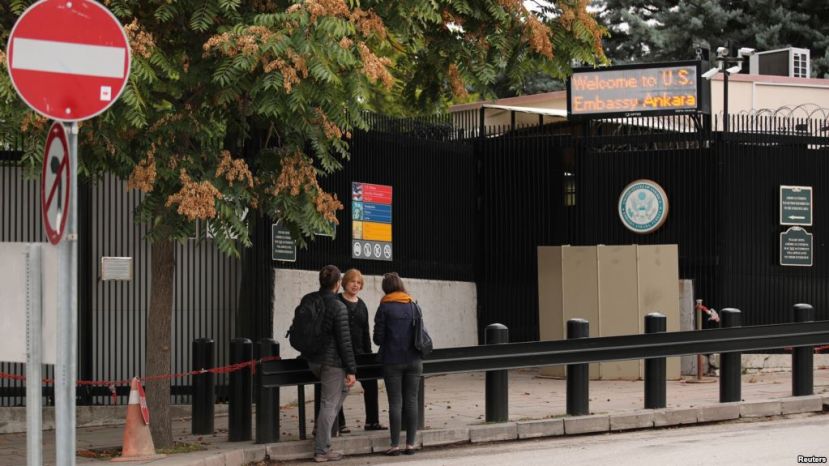 (1/2)FILE - People are seen in front of the visa application office entrance of the U.S. Embassy in Ankara, Turkey, Oct. 9, 2017. The U.S. suspended all non-immigrant visa services in Turkey Oct 8. and has since resumed only limited services.

The two nations resumed limited visa services in early November, around the time of a visit to Washington by Turkish Prime Minister Binali Yildirim.

In a statement on Twitter this week, the U.S. Embassy said visa appointments “are still limited, but we are prioritizing F, J, M, and petition-based work categories, as well as applicants with medical and business travel.”

The statement added that appointments “are available for January 2019, and applicants can always choose to apply outside of Turkey.”

F, J and M visas provide for different kinds of academic and vocational studies in the U.S.

A State Department official told VOA Wednesday that the purpose of the suspension in visa services was to minimize visits to the embassy and consulates “while we assessed the commitment of the government of Turkey to the security of our diplomatic facilities and personnel.”

The State Department declined to elaborate on the reasons for the yearlong delay in visa appointments.

But several Turkish citizens tell VOA in Istanbul the more than yearlong wait just to apply for a visa will hurt many Turks.

"How many American citizens come to Turkey in order to make money besides the appointed soldiers and the diplomatic personnel and their families," Murat Akyuzoglu, a lawyer, asked. "But hundreds of thousands of Turks live in the U.S. and all of those people's friends and families live here."

A teacher said the U.S. owes Turks "an explanation" while two students called the waiting period a political and anti-Muslim policy.

The visa spat has been a low point in a long-running deterioration in relations between the U.S. and Turkey, a key NATO ally straddling Europe and the Middle East, and once a Cold War listening post into the Soviet Union.

Relations worsened with an attempted coup in Turkey in July 2016, which the government of President Recep Tayyip Erdogan has blamed on dissident cleric Fethullah Gulen, who now lives in self-imposed exile in the U.S.

Washington has rebuffed repeated Turkish requests for his extradition, saying Ankara has not provided satisfactory evidence of his involvement in the coup attempt. Gulen has denied the accusations. Turkey has accused Topuz, who remains in custody, of being tied to Gulen's network.

The U.S.-Turkish relationship has also been troubled by American support for the People’s Protection Units (YPG), a Kurdish militia that played a vital role in the war against Islamic State extremists in Iraq and Syria. Turkey sees the group as a terrorist organization linked to a Kurdish separatist movement in southeastern Turkey.

Erdogan said last month that President Donald Trump had promised in a phone call to cut off arms shipments to the YPG. But the Pentagon later said any arms shipments would be decided based on needs on the ground.

More recently, Turkey has been angered by the trial in New York of Mehmet Hakan Atilla, deputy head of the Turkish state-owned Halkbank, who is accused of helping to circumvent U.S. sanctions on Iran.

During testimony in late November, Turkish-Iranian gold trader Reza Zarrab, the prosecution's star witness who has pleaded guilty in the case, accused Erdogan and his then-finance minister, Ali Babacan, of being aware of the sanctions-evasion scheme. Erdogan has criticized the probe as politically motivated.