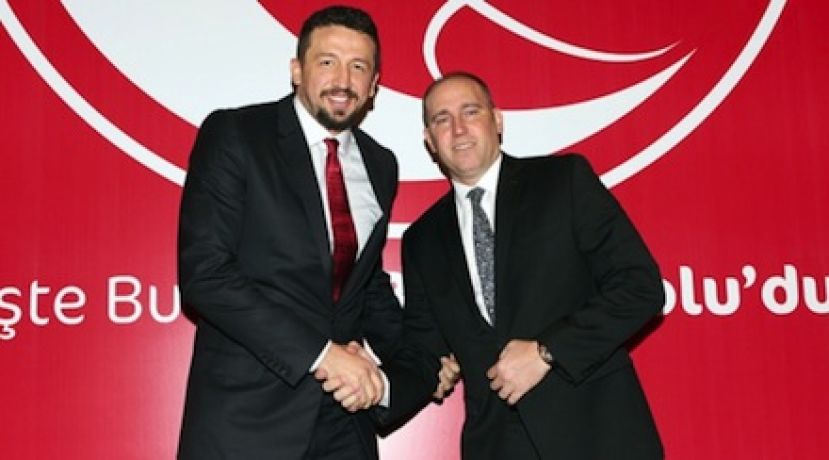 Turkoglu's career and life has been linked to the Turkish national team to such an extent that the legendary all-round forward accompanied Ergin Ataman's team during their EuroBasket 2015 campaign although he did not yet have an official capacity within the TBF.

President Erdenay revealed on Monday that Turkoglu will be involved in very important upcoming projects such as the TBF's candidature to host EuroBasket 2017 as well as finalising the structure of a new development league for players between 18 and 20 years of age.

"I have had a 15-year NBA career and I cannot thank enough all the people who helped me achieve that," Turkoglu stated.

"I have gained tremendous experience through these years and I will try to do my best to help our youngsters.

"We need to provide a vision to our youth as we have done the past 2-3 years with our very successful infrastructure.

"Both the TBL League as well as the national teams will have to carry out this project.

"It would make me very happy to see teams and players embrace this pilot project for young players."

Turkoglu first suited up for Turkey at the 1995 European Championship for Cadets and four years later he assumed immediately a big role on the senior national team upon his first appearance at the big stage, averaging 12.4 points and 3.4 rebounds at EuroBasket 1999.

The first big moment in his international career came two years later when in tandem with sharp-shooting guard Ibrahim Kutluay he led Turkey to the final of EuroBasket 2001 on home soil.

The hosts lost 78-69 to the all-mighty Yugoslavia of the time, but this silver medal constituted a success of biblical proportions, as Turkey stepped on the podium of a major basketball tournament for the first time in history.

Turkoglu was also paramount in the second big success of Turkish basketball in the 21st century, which came about in 2010, also at home.

Turkey defeated Serbia in a memorable semi-final at the World Championship and claimed silver after falling 81-64 to the USA in the final.

Turkoglu's dedication to the national team never prevented him from setting the bar high on club level for future generations and taking over from Kutluay as the brightest basketball star in Turkey.

The Istanbul-born guard/forward became the first Turkish-born player in NBA history after being selected with the 16th overall pick by the Sacramento Kings in the 2000 NBA draft.

The excellent rookie season of the Turkish legend (he was named to the 2000/01 All-Rookie Second Team) facilitated the arrival to the NBA of other Turkish players such as his friend and fellow former international Mehmet Okur, while younger players such as Omer Asik, Ersan Ilyasova and Enes Kanter followed suit later.

Turkoglu earned the NBA's Most Improved Player Award in 2007/08 as he finished the regular season on a career-best 19.5 points per game and then averaged 16.8 points per contest the following season to help the Orlando Magic win the Eastern Conference title and play in the Finals.

More in this category: « Nets to Host Fenerbahce Ulker for Preseason Game at Barclays Center Hedo Turkoglu Has Retired »