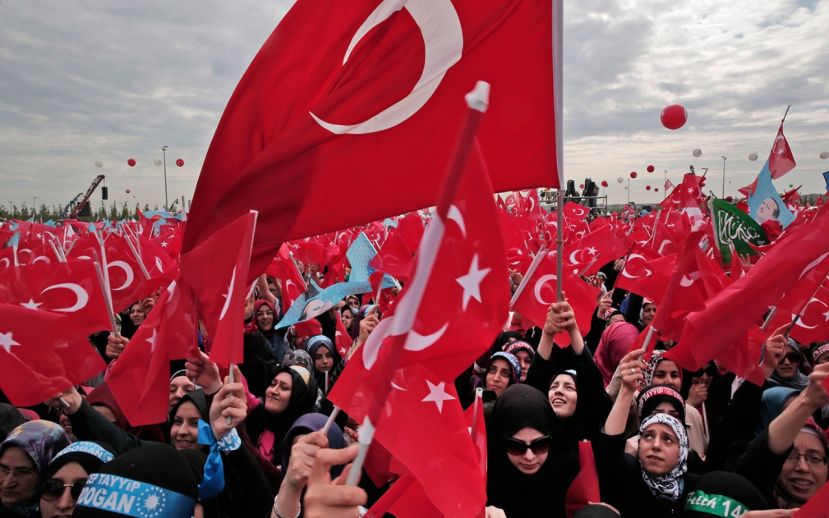 The center has conducted the "Research on Public Perception of the Turkish Foreign Policy" since 2014.

Threat perception towards Russia has fallen to 18.5 percent in 2017 from 34.9 percent in 2016 after Ankara and Moscow restored ties which had been strained when the former shot down a Russian warplane in 2015 claiming airspace violation.

"When we asked 'which country is the most threatening to Turkey?' The U.S. always takes the first place. But this year there is a very important leap and the U.S. has opened the gap among threatening countries," according to Professor Mustafa Aydin, the rector of Kadir Has University.

He points at the Syrian crisis that Ankara and Washington fall apart in their policies, and he sees the U.S. support to the Syrian Kurdish People's Protection Units (YPG) as the key reason for anti-American sentiment in Turkish public opinion.

Turkey considers the Democratic Union Party (PYD) and its armed wing, the YPG, to be the Syrian affiliates of the Kurdistan Workers' Party (PKK), a terrorist organization listed by Turkey, the U.S., and the EU.

However, the U.S. has supported the YPG as its ally on the ground in combating Islamic State(IS) group in Syria despite objections by its NATO ally.

The Turkish government's resentment against the U.S. administration is inherited from the era of former President Barack Obama who also backed the Syrian Kurds as a reliable force to fight the IS in Syria.

Turkish leadership has long been slamming at Washington over its cooperation with the Syrian Kurds and its negative rhetoric corresponds to growing anti-Americanism in Turkey.

The anti-western discourse of the government and nationalist party of the opposition has been increasing in recent years for domestic consumption not only in Turkey but also in some EU member states that are in the period of national election campaigns.

Turkish public support for the EU accession process has been decreasing over the years, according to the survey by Kadir Has University. Current support for the EU membership was marked at 48.4 percent, while 81.3 percent of the public is in the opinion that membership in the EU will never occur.

Professor Aydin says that Turkish public continues its EU-membership bid, but thinks it not likely to happen because of the difference in religious identities of Muslim majority Turkey and Christian majority Europe.

Turkey's membership negotiations with the EU is in limbo since a failed coup attempt in July 2016 prompted a massive crackdown on dissents by the Turkish government which draws criticisms from the member states. The European Parliament called for Turkey's accession talks to be suspended.

The Turkish leadership several times threatened to say "goodbye" to the EU unless the process of Turkey's accession to the bloc's membership is moved forward. Source: Xinhua

More in this category: « Foreign Buyers Are Snapping Up More American Real Estate Than Ever The 15 best US Office Deals Inked in the Last Five Years »