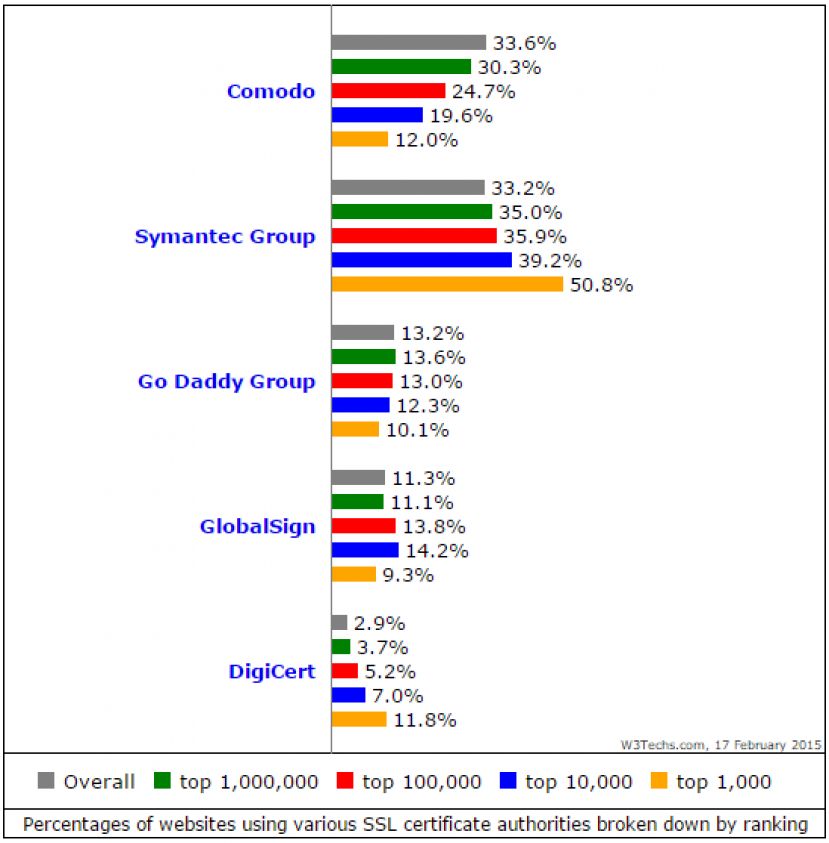 The Symantec Group with its brands GeoTrust, Thawte and Verisign has been the leading SSL certificate authority up to now, but has been dethroned by Comodo, whose market share climbed to 33.6% compared to 33.2% for Symantec.

In the face of devastating penalties prepared by Google, Symantec announced plans to sell its SSL issuance certificate business to rival company DigiCert. The price of the acquisition is $950 million in upfront cash and a 30 percent stake in DigiCert stock at the closing of the transaction. At the time of writing, Symantec was the third largest SSL provider on the market after Comodo and IdenTrust, with a market share of 14% and SSL certificates running on 5.5% of the Internet's domains. DigiCert is ranked sixth with a 2.2% market share and certificates on 0.9% of the Internet's sites. On the other hand, DigiCert has a bigger presence in the IoT market, where its SSL certs are often used to encrypt traffic between smart devices and vendor servers.

Rumors first surfaced about Symantec looking for buyers three weeks ago. The reason why the company sold its business is because of a series of sanctions Google was preparing to impose on Symantec SSL certificates.

Google gave Symantec a chance to remain on the SSL issuance market, but the company had to issue Symantec-branded certificates through a third-party SSL provider starting December 1, 2017.

Symantec also had the option to rebuild its SSL issuance business from scratch. The decision to sell was Symantec's way of avoiding rebuilding its entire business and ride into the sunset with a giant bag of money.

The price of the deal is what Symantec was looking for in mid-July, according to a Reuters report.

More in this category: « Ranking the World’s Most Valuable Brands Comodo Announces One Year Of Free Help Desk Support For MSPs »