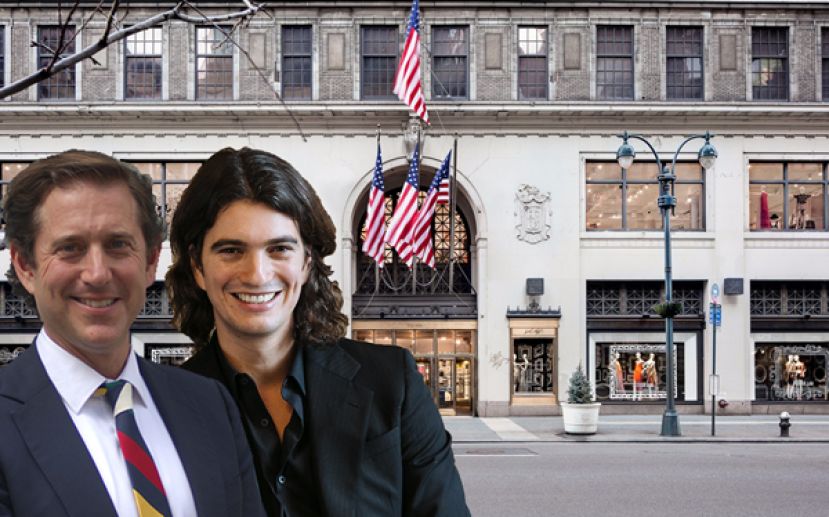 Facing mounting pressure to shed its real estate assets, Hudson’s Bay Company is selling Lord & Taylor’s flagship store to WeWork and its partner for $850 million. WeWork Property Advisors — a joint venture with Rhône Capital, who is making a $500 million equity investment in HBC as part of the deal — is purchasing the 676,000-square-foot landmark building for WeWork’s new global headquarters, the New York Times reported. The Real Deal first reported that WeWork and Rhone were raising several hundred million dollars for a real estate investment fund.

Lord & Taylor will lease the bottom floors of the building, taking less than a quarter of its current space. The move is expected to take place after Christmas next year.

It’s a somewhat unexpected move for WeWork, which earlier this month booted about 500 tenants from its current headquarters in Chelsea, telling tenants that it needed the space to expand and put all of its New York employees under one roof.

Some of HBC’s shareholders have pushed the company to sell off its real estate assets as retailers across the nation struggle to keep large stores afloat. The company’s flagship Saks on Fifth Avenue store was recently appraised at $3.7 billion.

The Lord & Taylor flagship store was valued at about $650 million about a year ago, and HBC earlier this year floated a plan to potentially stack apartments and offices above the retail space.

“The path to maximizing the value of Hudson’s Bay lies in its real estate, not its retail brands,” Jonathan Litt, founder of Land and Buildings Investment Management, a HBC shareholder, wrote in a letter to the board in June.

HBC plans to use the sale proceeds to pay down debt.

WeWork traditionally has leased space in office buildings, buying into its locations allows the co-working giant to benefit from property appreciation.

In addition to taking over the Lord & Taylor flagship, WeWork will also take space in the upper floors of three HBC stores in Canada and also in Frankfurt.

The co-working company will be installing its “Powered by We” operating platform in HBC’s corporate offices in New York, Toronto, Cologne, Dublin and Bengaluru, the company said in a news release. [NYT] — Kathryn Brenzel

More in this category: « Nearly $17B in EB-5 Funds Are Ready for Redeployment Turkish Auto Supplier Is Establishing Its First U.S. Headquarters in Georgia »