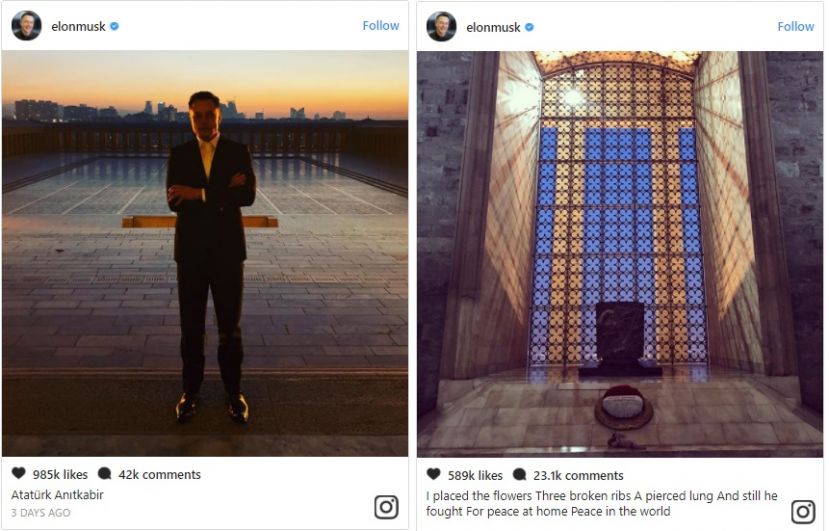 Elon Musk met personally with the Turkish President Recep Tayyip Erdogan last week. The photo of Tesla’s founder got 1 million likes for an Instagram photo taken at a memorial of Mustafa Kemal Ataturk. SpaceX CEO Elon Musk finished this week with a new record, his Instagram photo from the Turkish memorial just blown the social media and earned 1 million likes! That is a record, none user has earned more likes than anything else he has posted to Instagram.

Musk posted a shot of himself at the memorial of Mustafa Kemal Ataturk, the first president of modern Turkey and a champion of secularism and modernization. The post was enormously liked by the users because of the caption. Last century, the wise Ataturk said: Elon Musk was very proud to take the photo at a memorial of Kemal Ataturk and highly appreciated the progressive direction of the first Turkish president, demonstrating his reverence for science.

The billionaire Musk and the Turkish President had a meeting last week, during which they reportedly discussed plans on how Turkish firms could collaborate with SpaceX and Tesla.

The engineer and entrepreneur Elon Musk has an enormous experience in the car industry, and the Turkish leader is going to start a new project — domestic car. The details of that conversation weren’t revealed by the presidential office but Elon Musk’s photo a the Ataturk memorial set a new record on Instagram history — one million likes. (Julia Simpson, www.politicallore.com)