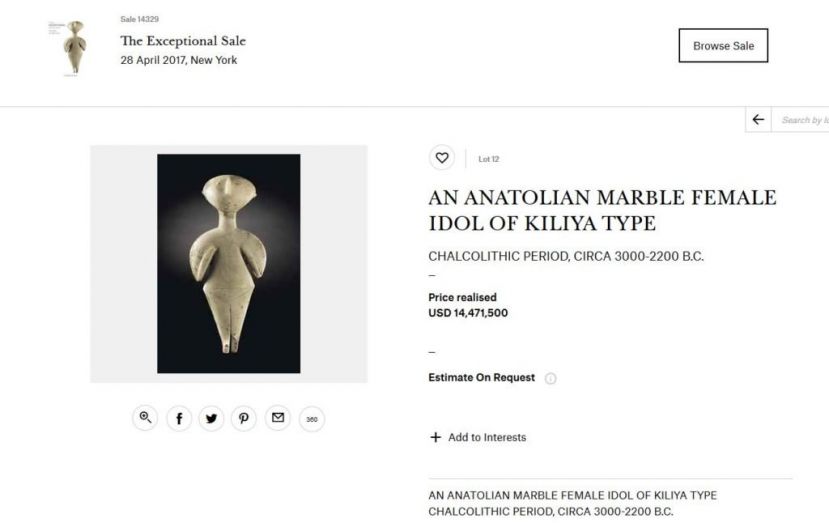 Christies.com The antiquity as featured on Christie’s website as part of “The Exceptional Sale.”

The Republic of Turkey filed an amended complaint on Thursday (July 27). Along with Christie’s, the complaint names collector and hedge fund manager Michael Steinhardt, who consigned the work to the April 28 auction, titled “The Exceptional Sale.”

On Wednesday, Judge Alison J. Nathan granted Turkey’s request to compel Christie’s to produce the name and contact information of the winning bidder of the work. “The Court does not order Christie’s to provide the requested information immediately,” Nathan added, but the parties must meet to negotiate “a protective order to govern that disclosure.”

According to Nathan’s ruling, “it is reasonable to believe that the bidder—who elected to bid a hammer price of more than $12 million dollars on the idol notwithstanding an announcement that the Republic had filed this suit, and later pulled out of the sale after the suit was not resolved within 60 days—might have information about the idol, about the bidding process, or about Christie’s vigilance in determining the provenance of the idol.”
Who Knew What When?

After the idol was smuggled out of Turkey in the 1960s, it was acquired by collectors Alastair Bradley Martin and Edith Martin from dealer John J. Klejman, according to the amended complaint. Klejman was “well known in the industry at that time as a ‘dealer-smuggler’ of stolen antiquities,” the complaint states.

The complaint alleges that each individual in the provenance chain “knew or should have known at that time that the idol had been looted from Turkey.”

The complaint also states that Steinhardt, who acquired the work in 1993, has been involved with “several high-profile cases involving allegedly looting antiquities,” and cites quotes from a 2006 Forbes article, in which Steinhardt said: “It is a little bit dangerous, but that is what makes it exciting. But life is filled with risks, isn’t it?”

Tom Kline, a lawyer representing both Steinhardt and Christie’s, declined to comment for this story.

Following the April sale, the Republic of Turkey moved for a preliminary injunction that would stop anyone from “selling, transferring, pledging, or otherwise alienating or disposing of the idol.”

That motion was withdrawn in exchange for a stipulation by the court that the idol would be fully insured and remain in a secure vault at Christie’s. Further, in the event that Christie’s secures another buyer for the idol, the auction house cannot execute a sale for at least 10 business days, during which time Turkey can renew its request for an injunction.

“We are, of course, pleased with the ruling,” Frank K. Lord IV, an attorney for Herrick Feinstein, which is representing the Republic of Turkey, told artnet News via email. “The idol is an irreplaceable part of Turkey’s cultural patrimony, and the Republic is seeking to recover it.”

A spokesperson for Christie’s told artnet News: “While Christie’s has significant respect for the cultural property rights of countries of origin, this particular work is very well documented outside of Turkey, and has been extensively exhibited in the public realm over the last 50 years.” Jonathan Pitt, the Washington, DC-based attorney representing the bidder, did not respond to a request for comment as of publication time. - By Eileen Kinsella, Senior Market Editor - https://news.artnet.com