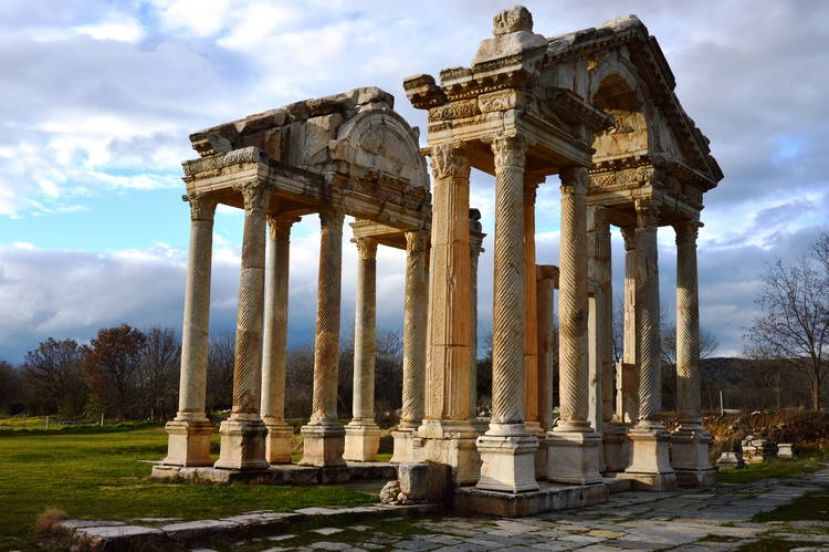 The sites added, in order of inscription, are:

Located in southwestern Turkey, in the upper valley of the Morsynus River, the site consists of two components: the archaeological site of Aphrodisias and the marble quarries northeast of the city. The temple of Aphrodite dates from the 3rd century BCE and the city was built one century later. The wealth of Aphrodisias came from the marble quarries and the art produced by its sculptors. The city streets are arranged around several large civic structures, which include temples, a theatre, an agora, and two bath complexes.

Located in northwest England, the English Lake District is a mountainous area, whose valleys have been modelled by glaciers in the Ice Age and subsequently shaped by an agro-pastoral land-use system characterized by fields enclosed by walls. The combined work of nature and human activity has produced a harmonious landscape in which the mountains are mirrored in the lakes. Grand houses, gardens and parks have been purposely created to enhance the beauty of this landscape. This landscape was greatly appreciated from the 18th century onwards by the Picturesque and later Romantic movements, which celebrated it in paintings, drawings and words. It also inspired an awareness of the importance of beautiful landscapes and triggered early efforts to preserve them.

Valongo Wharf Archaeological Site is located in central Rio de Janeiro and encompasses the entirety of Jornal do Comércio Square. It is in the former harbour area of Rio de Janeiro in which the old stone wharf was built for the landing of enslaved Africans reaching the South American continent from 1811 onwards. An estimated 900,000 Africans arrived in South America via Valongo. The physical site is composed of several archaeological layers, the lowest of which consists of floor pavings in pé de moleque style, attributed to the original Valongo Wharf. It is the most important physical trace of the arrival of African slaves on the American continent.
Extensions:

The initial property, inscribed in 1988 on the World Heritage List, was formed by the Grande-Île, the historic centre of Strasbourg, structured around the cathedral. The extension concerns the Neustadt, new town, designed and built under the German administration (1871-1918). The Neustadt draws the inspiration for its urban layout from the Haussmannian model, while adopting a Germanic architectural idiom for its edifices. This dual influence has enabled the creation of an urban space that is specific to Strasbourg, where the perspectives created around the cathedral open to a unified landscape around the rivers and canals.

This site, which was inscribed on the World Heritage List in 1996, originally comprised the groups of buildings and monuments located in Weimar and Dessau, all built under the direction of Walter Gropius, the first director of the Bauhaus School. The extension of the property includes the Houses with Balcony Access in Dessau – three storey brick blocks for low-income students – and the ADGB Trade Union School in Bernau built under the direction of Hannes Meyer, successor to Gropius until 1930. This extension reflects the contribution of the department of architecture to the austere design, functionalism and social reform of the Bauhaus, a movement which was to revolutionise architectural thinking and practice in the 20th century.

The 41st session of the World Heritage Committee (9-12 July), is chaired by Jacek Purchla, founder and director of the International Cultural Centre in Kraków.