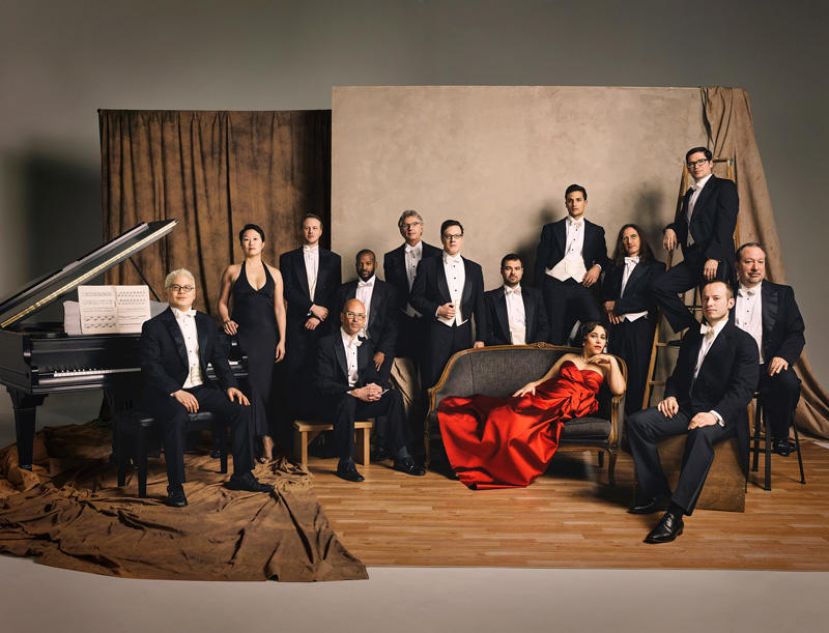 Founded in 1994 by Thomas Lauderdale in Portland, Oregon, the members of Pink Martini represent themselves as music archaeologists who bring together melodies and rhythms from various parts of the world and present them in a modern form. Pink Martini’s songs have so far been used in many films such as “The West Wing” and “Desperate Housewives.”

China, you are not only a performer; you write lyrics as well. It mustn’t be too easy to make a comparison, but how do you feel when you are on stage and when you are writing?
Actually, I write both music and lyrics. When I write songs, I am most creative, more than singing on stage. Nothing feels better to me than writing and recording music. I love to perform, as well, but there I am delivering a song that is already created. Writing is more like improvising, which is an electrifying feeling.

What is the best part of being on stage?
The energy from the audience is different every night and fuels the performance. I am not sure if the audience is aware of how much of a collaboration it is between performer and public. When I attend concerts as a member of the audience, I am very noisy, clapping and whooping, because I know how much it helps the performer. And the very best part of being on stage is when something unexpected happens—which is when the magic happens.

You have been working more than 20 years together. How does it feel to be working with each other? When you have a disagreement how do you solve it?
It feels very familiar, and also a mystery. There is a comfort and a camaraderie but also a letting go of conflicts and a setting aside of issues. With maturity, we have learned to work together better and to leave each other alone unless it is necessary to address something. I guess you could call it “poise.”

Do you remember your first public appearance, your first gig? How did you feel?

I remember my first solo appearance in New York City at The Bitter End where I played my guitar and my original songs, and I was wearing vintage bell bottom Levi jeans (again the 1970s), and I was nervous.

When did you first discover that being a musician/singer would be your life path? Have you ever imagined an alternative life scenario in your mind? I mean, what would you have done, if you didn’t become a musician/singer?

I knew I would be a singer when I was 8 years old. I bought the album “Donna Summer Live and More” and learned to sing by impersonating Donna Summer and dreamed of wearing her costumes and glittery makeup. So I always knew I would be a singer, and it has really panned out in a very similar scenario. Had I not become a singer, I would have been a painter, a visual artist and an actress. Also an interior designer/architect.

Who are your idols? Whom do you admire?
Renée Fleming is my opera idol, and I recently met her, and it was a real thrill. I am a big fan. I admire her grace and her career choices and her motherhood. Donna Summer was my first idol, and I am so sad to have never met her or seen her perform live. Joni Mitchell is a huge idol for me. Her voice and her songwriting are unmatched.

What do you listen to in your daily life?
I am all over the map. I love listening to pop music with my 10-year-old son. I listen to opera. I listen to Chopin nocturnes to be calm. I listen to Adele when I want to feel vocal power. I listen to The Weeknd and Phoebe Bridgers and Maggie Rogers. Then, Ella Fitzgerald or Dinah Washington. It changes all the time.

Do you have a life motto?
“Keep moving forward.” I can tend toward inertia, and I need to always keep putting one foot in front of the other. Also, “nothing really matters.” As in, don’t worry and stress about decisions because in the end you won’t even remember this thing that felt so big at one time, and making any decision is better than no decision. And no decision is necessarily right or wrong. You will never really know what it would have been like the other way. I don’t know if this makes sense to anyone else, but it helps me to not needlessly worry.

You have been to Turkey many times. Do you have any remarkable memories?
I remember a show outside on the Bosporus the first time we appeared there, and Thomas had missed his flight and we had to do the first half of the show without him. He arrived just in time for the second set. That was a nail-biter! Also the food, the amazing feasts that we are treated to and the warm hospitality, and the Grand Bazaar where I have found so many treasures that my home is filled with, rugs and poufs from Istanbul! And the irmik helvası of course. The most delicious dessert in the world!

Why do you think people in Turkey love you so much?
I think Turkish people love the good old days, and we are a band that celebrates the good old days. So right away it is a perfect match. Then the elegance and glamour of the music is similar to the Turkish style. And we have a long love affair with Turkey that started at the beginning of our career.