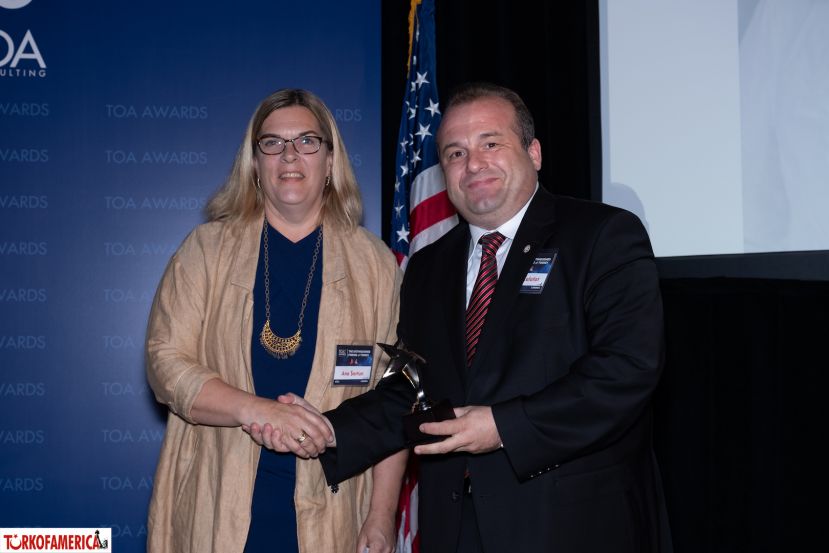 Cagatay Okutan Turkey’s cuisine is recognized as being one of the most sophisticated in the world and it wasn’t well represented in the Boston area at the time Chef Ana Sortun decided to open Oleana in 2001.

In 1997, while she was working at Harvard Square’s Casablanca restaurant, cooking Mediterranean food mostly inspired by her travels to Italy, Spain and the south of France.  One evening she met Ayfer Tuzcu Ünsal, journalist and author of books on Mediterranean cuisine, who was visiting Cambridge and dining with her boss.  She invited Ana to visit Turkey and to study the cuisine from her hometown, Gazientep. When she thought about going to Turkey, Ana imagined genies and flying carpets. She had no idea and knew nothing about Turkey or the cuisine. She woke up to her first morning in Gaziantep. It was hot and she was off to the market bright and early with Ayfer. She had put on shorts and a tee shirt and she sent her back to her room to change into long sleeves and long pants. I thought it was interesting that I had to be covered and that women don’t usually go to the market. Ana soon got over the mystery (understanding much later) but it’s the memory of a potluck Ayfer threw for her that is tattooed inside her head forever. It was a turning point and a revelation in her career as a chef.

On her first trip to Turkey, Ayfer and her friends graciously threw her a welcome lunch (pot luck-style) in the park.  Everyone prepared a favorite recipe (including Ana) and there were 30 practiced and perfected dishes spread out from one end of the table to the other.  ‘’I tasted every single one and marveled at how rich and complex the flavors were. I realized that I had tasted 30 dishes (essentially making my way through a 30 course tasting menu) and I didn’t feel terrible.  Even though the flavors were complex, the dishes were light.  This idea of food being rich but not heavy was something new for me,’’ she remembers.

A very big impression was made on her that day and has changed the way she cooks forever.  She took an interest and began to study Turkish ingredients, spices, recipes and techniques, eventually coming up with her own style of Mediterranean cooking that is modern, interpretive but inspired by what she learned and continue to learn from travels to Turkey and other parts of the Mediterranean.

That trip was when she learned that in the Mediterranean, spice is used to create richness, depth and flavor without heaviness. She also experienced the mezze style of eating, which is to have many tastes of mostly vegetable-based dishes before reaching a protein course. “Chefs always focus on flavor and appearance,” says Sortun, “but few think about how one feels after eating a long meal.”

Upon her return to Boston, she wanted to fuse her newfound love of Eastern Mediterranean spices with her passion for using only the best ingredients. The result of this union was Oleana, which opened in Cambridge in 2001. A mere four years later, Sortun won a coveted and prestigious James Beard Award. Her cookbook SPICE: Flavors of the Eastern Mediterranean was published in 2006 and has become a best-seller.

In August of 2008, Sofra was born in Cambridge, Mass. It has received both local and national press; Food & Wine, Metropolitan Home and Gourmet have all featured it as a place not to miss. Her most recent undertaking has been Sofra Bakery & Café in Cambridge, which offers a unique style of foods and baked goods influenced mostly by Turkey, Lebanon, and Greece. (FRIEND OF TURKEY IN CUISINE)