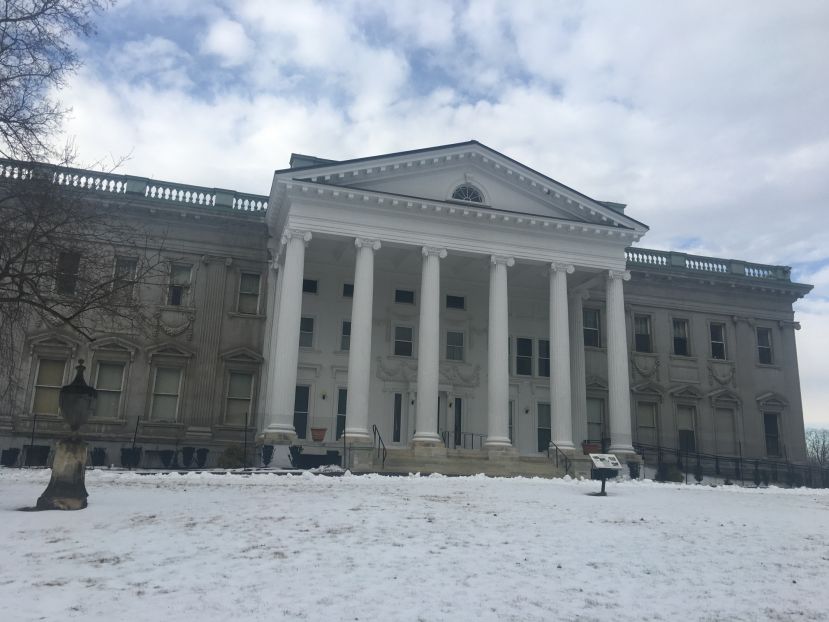 You should especially visit the two of these buildings. The first is the mansion with 79 rooms located at the Staatsburgh State Historic Site. Built in Beaux-Arts style, the mansion was the place where Ruth Livingston and Ogden Mills used to live in.

By Cemil Özyurt - Going to a musical in New York’s Broadway, walking in Central Park, shopping at SoHo, and being mesmerized by the lights of Times Square and looking around for minutes on shop windows of 5th Avenue are ordinary activities done by each tourist that comes to New York City. But if you come to NYC and are willing to take the two hours long drive to the north, to the ‘upstate’ region, you will have a chance to get out of the chaos of the millions and meet a brand new New York that has a magnificant history and nature.

Where is the Dutchess County?
Dutchess Country is an area located in the southeastern region of the state of New York that is called as the Hudson Valley and it is dwelled by around 300K people. About two hours after you take the Hudson Line train from Grand Central, you pass the Westchester in Putnam County and arrive at Dutchess County. The price you pay for a one way train ticket to the County is between 27 USD to 38 USD.

Places to visit in Dutchess County

1- Franklin D. Roosevelt National Historic Site
America’s former president with the longest term served, Franklin Delano Roosevelt, is a name that has become identified with the Dutchess County. The body of the 32nd President of the USA today rests at Hyde Park, where he was born and devoted with passion. FDR Presidential Library & Museum is one of the historic sites of Dutchess County that is visited the most. At the historic site, there is the house where Roosevelt was born in and raised; a library; and, the house that First Lady Elanor Roosevelt lived between the years 1945 and 1962 and named as ‘Val-Kill’.

Roosevelt had a stroke during a trip to Canada in August of 1921 and had to live the rest of his life with crutches and a wheel chair. Roosevelt also went through tough times in his relations with his wife Elanor. At this site, you can also read from the letter hung on the walls the thoughts of First Lady that she wrote down after having found the secret letters revealing the President’s affair with his secretary.

2- Mansions from the ‘Gilded Age’
The time period in the USA that is between 1856, the year marking the end of the Civil War, and 1914, te year when WWI began, is referred to as the ‘Gilded Age’. In Dutchess Country, it is possible to see a number of grand mansions and villas built by the wealthy families since 1860’s.

You should especially visit the two of these buildings. The first is the mansion with 79 rooms located at the Staatsburgh State Historic Site. Built in Beaux-Arts style, the mansion was the place where Ruth Livingston and Ogden Mills used to live in.

This mansion, which was decorated with furnitures reflecting the taste of the times of Louis XIV, Louis XV and Louis XVI, was famous with the legendary weekend parties.

After Ogden Mills died in 1929, the house was handed down to his son, Ogden Livingston Mills. After Mills died in 1937, his sister Gladys Mills Phipps donated the house to the state of New York. Today, the house is still owned and operated by New York state.

Another glamarous structure from the ‘Gilded Age’ is a mansion placed at the Vanderbilt Manstion National Historic Site. This house, which is also built with Beaux-Arts style, belonged to Frederick William Vanderbilt (1856-1938), who was a member of the Vanderbilt family that gained great wealth with their firm in America’s railroad business. The family had lived in the house from 1895 to 1938. In 1940, the 54-room house was handed over to National Park Service by Vanderbilt’s niece Margaret Daisy Van Alen after Vanderbilt died in 1938. The house is still run as a public property today.

3- Where to stay?
The barracks that George Washington used for his soldiers to state and get directives during the war against the British is today used as America’s oldest hotel. The Beekman Arms and Delameter Inn is an ideal place for those who would stay at a historic site rather than preferring comfort.

Having been built in 1766 and in operation since then, the hotel used to belong to the Beekman Family, one of the prominent families of the Hudson Valley. George Washington, Alexander Hamilton, as well as, important people that played a role in America’s war of independence, such as General Philip Schuyler and Benedict Arnold, were among the people that stayed at this place. Franklin Delano Roosevelt and Bill Clinton were also among the US presidents that visited the hotel.

Rumors about the hotel being haunted have also been a topic of documentaries on TV channels, where it has been claimed that the spirit of a soldier that took part in the American War of Independence float through the building. The staff at the hotel, however, say that they have not encountered such thing.

If you want to stay at a place in the region with the view of the Hudson River, you can choose The Rhinecliff, which is a hotel that has been there since 1854 as one of the places in the area with the best view. Facing both the Hudson River and the Catskill Mountains, the hotel is also only three stops far from the Rhinecliff train station. Since the hotel has only 9 rooms, the reseravtions might need to be made in advance. (http://therhinecliff.com/)

4- What to eat and where to eat it?
The first place to visit in Dutchess Country for sure is The Culinary Institute of America (CIA). One of the most prestigious culinary schools of the world, the CIA was established in Connecticut in 1946. Today, it is operated in its building at the banks of the Hudson River at Hyde Park, to where it was transferred back in 1972.

Students at the institutive take lessons on a variety of subjects ranging from cake and bread baking to wine culture and restaurant management.

Among the graduates of the school are many famous people who are active in different branches of culinary, such as Anthony Bourdain, who is known for his culinary shows, and Steve Ells, the creater of the franchise business of Chipotle Mexican Grill.

The are also various restaurants within the institute where students work and gain hands on experience on things they learn at the school. One of those restaurants is Caterina de’ Medici, a venue serving Italian food where all workers are students.

‘The Shadows on the Hudson’, which lay before your eyes the Hudson River in Poughkeepsie, and the ‘Foster’s Coach House’, which has been in operation in Rhinebeck since 1890, are also other options when choosing a place to dine.

A small town that was colonized by the Dutch in 1688, Rhinebeck has the capacity to offer its visitors different experiences with its over 30 restaurants and cafes.

The Hudson Beach Glass, Inc. is a shop run by a mother and her daughter in the center of Beacon, which has a population of 15K. A unique and rare workshop where items are made with glassblowing, the Hudson Beach Glass was established in 1987. It hosts various workshops throughout the year. (http://www.hudsonbeachglass.com)

One of the region’s most famous syrup brands, Crown Maple, is produced at Madava Farm located in Dover Plains. The syrup that is produced with hoses connected to over 50K maple trees across the 800 decares of land. The syrup is consumed massively with foods like pancakes and waffles. In this farm, which has been open to touristic visits since 2012, one can buy not only syrup but also other products such as soap, candle, and oil.

Another farm in the area that is worth to visit is the Harvest Homestead Farm. The farm where a drink called Dutch’s Spirit is produced has an interesting story. In 1930’s when alcohol ban was still in force, drinks used to be produced at calendestine cellars and distributed in New York region. And, one of the most famous smugglers of that time was a smuggler who was famed with the name of Dutch Schultz. Thousands of bottles of drinks were seized from the cellar that was revealed during a raid carried out on 10 October 1932. The workers there were arrested but Schultz got off. He died later during a clash in 1935. It is often said that Schultz had a treasure, which is now thought to be buried around the Catskill Mountains in the Pine Plains region, where the drink is produced today. The storages and secret tunels from those times are still present today in the farm.

Turning the venue into a place for drink production again was the idea of Alex Adams and his close friend Ariel Schlein. The farm had initially been bought, in 1969, by Janet and Charles Adams, grandparents of Alex Adams.

Alex Adams used to tell his friends at school about the story that took place at the farm in 1930’s. He also used to spend his summers at the farm. The two partners, Adams and Schelin, began producing the drink named as Dutch’s Spirit in the farm after the relevant law on drink production changed in 2008.

Today, it is possible to see newspaper clips, books, and postcards about Dutch Schults from those earlier years. (http://www.dutchsspirits.com/)

The idea of building a vineyard only for production of grapes and wine belongs to John S. Dyson, who is today praised as one of the leaders in wine production. The Millbrook Vineyards & Winery in Millbrook is one of the oldest grand grap production fields in New York. Also a partner of vineyards and wine production farms in different places from Italy to California, Dyson had made his first investment at his hometown of Millbrook, NY with his wife Kathe back in 1979.

The venue that was opened to visitors and tourist groups in 1988 is a place where 10K bottles of wines, on average, are produced every year. It also hosts special parties and dinners, and offer private tours for peple who want to taste the wines. Millbrook Pinot Noir, Chardonnay, Cabernet Franc wines and wines from Italian Tocia Friulana grapes are produced in the vineyard that is spread across a 30 decares of land. (http://www.millbrookwine.com)

Along the Hudson River, it is possible to come across countless bridges. However, the bridge over which you can walk and join special programs on full moon nights is a bridge that is within the borders o Dutchess Country. The bridge that used to be used for mine transportation through railway is known and the Poughkeepsie Railroad Bridge. With the support of the state of New York, it has been turned into a walking-track. It was built in 1889 but it became dysfunctional after a fire in 1974. In the year of 1979, it was designated as a historic site. The bridge, which was opened in 2009 after restoration, is 2063 above the ground and had a width of 65 meters. (https://walkway.org)

If you also would like to follow up with art related activities, you can go to all sorts of stage performances, such as plays, ballet shows, opera, and concerts, at the Richard B. Fisher Performing Arts Center at Bard College. The organization held in the month of August under the name of Bard Music Festival Concerts and Panels, for example, coincides with a busy time of the school year and looked forward to by art lovers.

If you would like to explore the less known places of Dutchess County and New York more, you can visit the website www.iloveny.com.