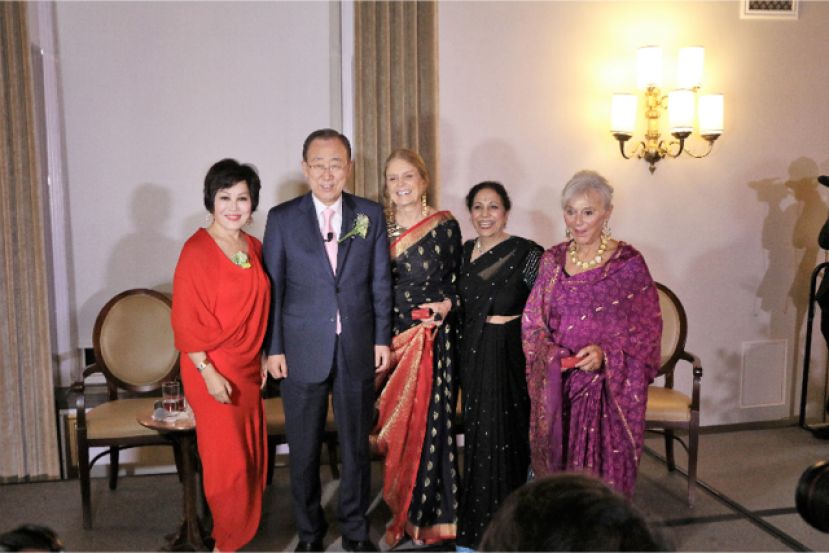 Jimmy Cuneyt Gurkan - New York, New York, October 13, 2017 - On Friday, October 13th, Asia Initiatives organized its 16th annual gala based on a universal goal: to raise human dignity, to help each woman reclaim their rights, and to address challenges with confidence. The delightful evening honored multifaceted elements of courage and compassion and took the audience on an enlightening journey. Panel discussions featured icons like the honorable Mr.Ban Ki Moon the 8th Secretary General of the United Nations, Gloria Steinem, Dr. Eva Haller and Yue-Sai Kan, all of whom brought amazing and unique perspectives on their generosity, perseverance, and commitment to closing the gender gap. A well-attended event with personalities from all walks of life such as New York city leader, Congresswoman Carolyn Maloney, Lieutenant Governor of Ontario Elizabeth Dowdeswell, Ambassador Cho Tae-yul (Permanent Mission of Republic of Korea to the UN) Madame Kim Hyekyung (wife of Ambassador Cho) Madame Phumzile Mlambo-Ngcuka (Executive Director of UN Women) and Madame Ban Yoo Soon-taek to name a few. This conglomeration of zealous entrepreneurs, activists, media personalities, and millennial groups attended to support the Social Capital Credits (SOCCs) concept of Asia Initiatives and put forth their ideas on translating it into communities around the world. The success stories of the SOCCs projects shared by Dr. Geeta Mehta, founder of Asia Initiatives, inspired the audience on how love, courage, compassion and inspiration can change a woman’s destiny and ultimately impact the future of her family.

The award was instituted in Mr. Ban Ki Moon's name to honor the Secretary General’s important contributions to women’s issues, including his important role in the creation of the UN Women, his participation in the establishment of the first high-level panel on women’s economic empowerment, and his work reducing the gender wage gap within the UN itself while increasing the number of women in senior management by over 40 percent.The awards were presented by Mr. Ban to three women trailblazers, Gloria Steinem, Dr. Eva Haller, and Yue-Sai Kan, who have made significant contributions in the area of human rights and sustainable goals.

Secretary General Mr. Ban stated, “It is such an honor for me to be able to recognize these amazing women. During my tenure as Secretary General, I always worked to make women’s empowerment a top priority and I can see that Asia Initiatives is carrying on that legacy.”

Dr. Mehta has always believed in the power of lifelong learning and the ripple effect education can have on a family. The awards reinforced the message of what Asia Initiatives holds true as its philosophy and how the journey of the three remarkable, iconic women awardees reflects the spirit and future mentorship of the institution.

Steinem, dressed in a beautiful traditional Indian saree, accepted the Ban Ki Moon Women's AI Empowerment Award and shared that she will continue to work to bring the desired change we all hope to see in the world. She recently published her memoir, My Life On the Road, a New York Times bestseller. Her book signing at the AI gala was one of the highlights of the event. Steinem, founder of Ms. Magazine and leader of feminist movement still lives and manages a very busy and extensive travel schedule, global lecture engagements, and serves as a frequent media spokesperson for feminist issues.

Eva Haller was awarded the Ban Ki Moon AI Mentorship Award. She is a Hungarian-American philanthropist. She participated in the Hungarian resistance movement in World War II as a young girl and has lived through many challenging episodes in her life. She can empathize with the struggle of a woman who is trying to address difficult times and therefore believes in the true power of transforming communities through various models of mentorship. Eva serves as a mentor on the boards of numerous nonprofits, including AI, Women For Women International, Free the Children and the Jane Goodall Institute.

Yue-Sai Kan was awarded the Ban Ki Moon AI Social Entrepreneurship Award. As a veteran television personality in China, she is an entrepreneur as well as an Emmy-winning Chinese-American television producer/host. She serves as a ‘Say Yes’ Ambassador to the UN, and has dedicated her life to many humanitarian causes including building libraries and schools for underserved communities in China.She also moderated the panel discussion and graced the stage with her poise and sense of humor.
The evening concluded with traditional Indian dance pieces, delicious cultural cuisine, and an interactive game communicating the SOCCs principle to the attendees. The game helped tie the Gala together, closing it on a successful note.

Secretary General Ban thanked Dr. Geeta Mehta for her untiring efforts to uplift humanity, and wanted Asia Initiative to continue its legacy of building up one woman at a time to ensure sustainable change in the long run.
Hide original message

"We honor Mr. Ban Ki Moon and our awardees, but we never forget the astounding value behind the hope and tenacity of the thousands of women who participate in our projects and act as catalysts of change,” Mehta said.

It was a night to remember, where philanthropy and leadership came together and held the hourglass of the future in the name of vision, commitment and action to uplift humanity
www.asiainitiatives.org

Asia Initiatives:
Asia Initiatives is a 501(c)3 nonprofit organization headquartered in New York and founded in 1999. AI has implemented its innovative Social Capital Credits (SoCCs) method in India, Kenya, Ghana and the United States. SoCCs are a revolutionary currency for social good that empower communities to take leadership in their own development. Thousands of women and their families have benefited from AI programs, from rural farmers in Maharashtra, to unemployed women in Washington DC, to market vendors in Ghana.

More in this category: « US Delegation To Travel To Turkey Amid Visa Crisis Ex-envoy Says U.S. Should Prepare to Lose Turkish Base »