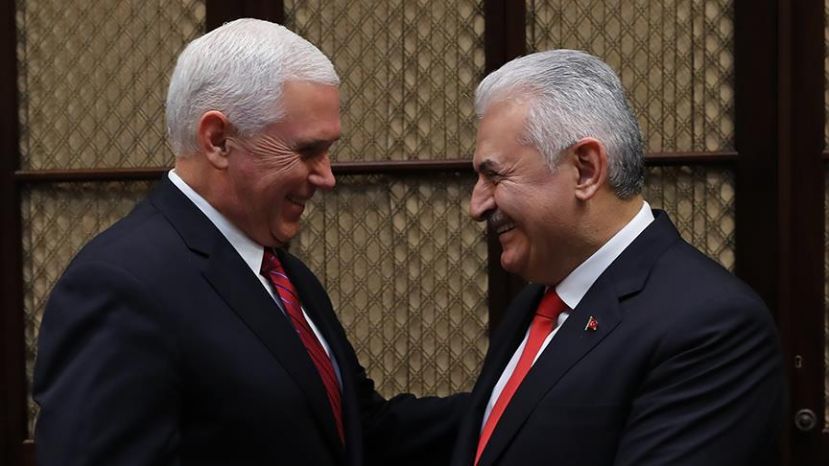 WASHINGTON (Reuters) - U.S. Vice President Mike Pence expressed “deep concern” to Turkey’s prime minister on Thursday about the arrests of American citizens and local staff of U.S. missions in Turkey, the White House said.  The matters raised by Pence are some of the issues that have created tension between the two NATO allies in recent months, along with a dispute over a Turkish cleric living in the United States whom Ankara accuses of orchestrating a failed military coup in Turkey last year.

In a White House meeting with Prime Minister Binali Yildirim, Pence voiced “deep concern over the arrests of American citizens, Mission Turkey local staff, journalists, and members of civil society under the state of emergency and urged transparency and due process in the resolution of their cases,” the White House said in a statement.

In May, a translator at the U.S. consulate in the province of Adana in southern Turkey was arrested. More recently, a U.S. Drug Enforcement Administration worker was detained in Istanbul. Both are accused of links to last year’s coup attempt. The U.S. embassy has said the accusations are baseless.

Another issue to be raised, Yildirim had said, was the fate of some Turkish citizens arrested in the United States - a reference to a wealthy gold trader who was arrested over Iran sanctions evasion last year and an executive at a state-owned bank arrested this year.

The White House statement made no mention of any discussions about either subject.

It said the two officials “expressed hope that their meeting would help to usher in a new chapter in U.S.-Turkey relations and agreed on the need for constructive dialogue, as friends and allies, on bilateral challenges.”

Pence reaffirmed the “enduring strategic partnership” between the two countries and stressed the U.S. commitment to stand with Turkey against the militant Kurdistan Workers Party (PKK) “and other terrorist threats.”

The United States partially resumed issuing visas in Turkey on Monday after getting what it said were assurances about the safety of staff at its missions following a number of detentions. Turkey said it would relax a visa ban of its own.