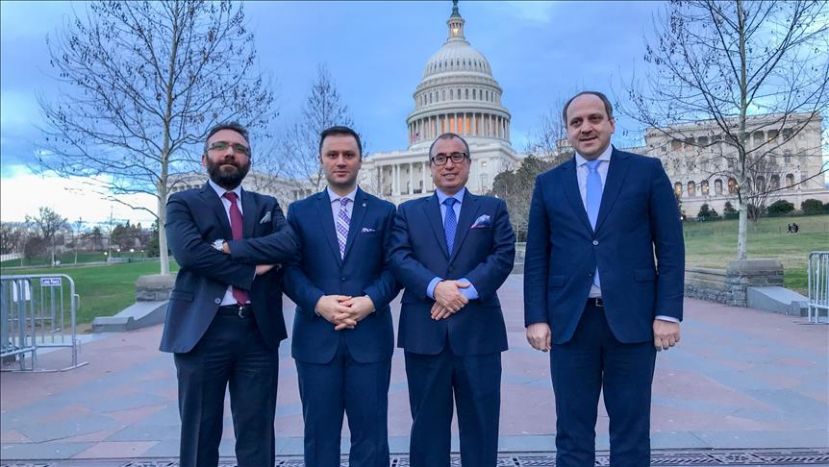 Murat Guzel, the organizer of the event, emphasized the importance of increasing American-Turks’ role and influence in U.S. politics and stressed that the Turkish community should ask the U.S. authority to account for their taxes.

Pointing out that the U.S. administration was aiming to allocate over $500 million to the PYD/PKK of the 2019 budget, Guzel said, "This money is being cut off from our taxes. Ironically, the U.S. intelligence organizations also described this group [PYD] as an extension of the PKK terrorist organization. As a matter of fact, in the past weeks, they have submitted a report [on this] to the Congress. We, as taxpayers in America, have met the members of the Congress and called them to account for the taxes we have paid and we will continue to do it.

"We have received very positive results especially from talks we have done yesterday and today, and we will increase our visits to the Democratic Party," said Guzel.

He also called on the Turkish community in the U.S. to call their representatives by phone and email or to visit them to contest the use of their taxes.

MUSIAD's U.S. President Mustafa Tuncer said they had told the U.S. congressmen that “terrorism cannot be supported by the taxes we have paid".

He highlighted that the contribution of Turkish investors to the U.S. economy could not be underestimated.

He argued that the damage in Turkish-U.S. relations was not only by the PYD/PKK terror group but also U.S. ties with the Fetullah Terrorist Organization (FETO), as its leader resides on U.S. soil.

“Our negotiations [with the lawmakers] were very productive," he added.

FETO and its U.S.-based leader Fetullah Gulen orchestrated the defeated coup of July 15, 2016, which martyred 250 people and injured nearly 2,200 others.

Ankara accuses FETO of being behind a long-running campaign to overthrow the state through the infiltration of Turkish institutions, particularly the military, police and judiciary.

He said the Turkish community in the U.S. would continue to make its voice heard and would contribute to restoring relations between the two NATO allies.

"We saw that the connections were not as damaged as they were written and drawn [in recent reports],” he added.

More in this category: « Why is Russia Helping Turkey in Afrin? A Response from Turkish-American Activist to Guardian »