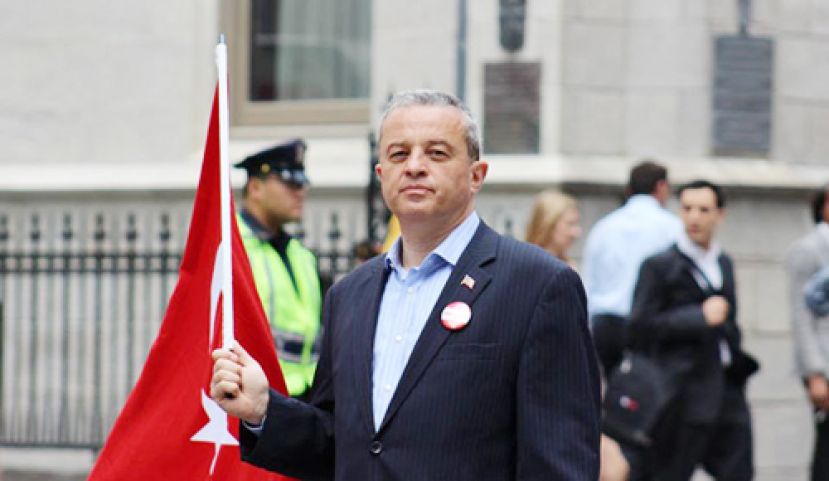 I am grateful the author of this "Opinion" piece was someone outside of the Guardian, Prof. Gareth Stansfield, resulting in greater balance. I have now read the works of two Guardian staff members on the subject, one by Kareem Shaheen (Jan. 21), and the other by Martin Chulov (Feb. 1), both of which have a pro-Kurdish stance, particularly the latter. Mr. Shaheen wrote, "Ankara regards the (YPG/PYD) as part of the... (PKK)," and Mr. Chulov wrote, "Ankara’s claims that the northeast and Afrin are effectively led by the PKK." In other words, according to the Guardian, it is only Turkey that says these Kurds are PKK. (Here is a more recent article, from March 3, that was even more mocking, with the use of quotation marks: "Ankara says the YPG is a 'terrorist' extension of the... PKK.") Prof. Stansfield also concurs ("For Turkey, these groups are synonymous with the PKK"), but at least grudgingly offers that the PKK connection has "an element of truth." Yet he still winds up essentially in agreement with the Guardian's position: "...While this does not mean that the YPG is the PKK, it’s understandable why Ankara would make the claim."

The Kurdish groups may have different acronyms, but the Kurds themselves are aware they are all allied with the PKK in one form or another. As a fighter in the position to know best was quoted in "America’s Marxist Allies Against ISIS" (Wall Street Journal, July 24, 2015): "It’s all PKK but different branches... Sometimes I’m a PKK, sometimes I’m a PJAK, sometimes I’m a YPG. It doesn’t really matter. They are all members of the PKK.

The CIA has recently recognized the PYD as a terrorist group, after a US State Dept. official correlated the YPG (the PYD's armed wing) as a terrorist group as well. Former US Secretary of Defense Ashton Carter confirmed not only the YPG's ties to the PKK, but the PKK's terrorist nature (45 seconds into this 2016 video). From a "Kurdistan" site, here is a 2017 operation conducted by yet another Kurdish group affiliated with the PKK capturing Turkish officers; this is a war, involving the kind of hostilities Great Britain faced with the IRA — a group the Guardian had little sympathy for.

In 2001, your nation also designated the PKK as a terrorist organization. Yet two years ago, your Parliament sought the release of the PKK leader, Abdullah Öcalan; he is the one who accused the Armenian-groomed Kurdish-Turk Taner Akcam, once a soldier for Öcalan's cause, as having caused "heavy casualties." (The shady Taner Akcam is a man the Guardian has lionized in its many affirmations of the false "Armenian genocide," in articles such as this and this, where Akcam, whose degree [gained via mentor Vahakn Dadrian] is in sociology, was described as a "historian.")

Let me  bear in mind the PKK's goal, per their Oct. 27, 1978 Marxist-Leninist Manifesto, is an independent socialist state of Kurdistan on territory under the sovereignty of Turkey, Syria, Iraq and Iran. Incitement to secession is a crime in every country. In order to achieve this goal, the PKK has taken over 40,000 lives, including those of Kurdish heritage who have refused to side with the PKK.

My country changed history because of the intense reaction resulting from the murder of 3,000 of my fellow Yanks. Relative to the U.S. population, the 40,000+ Turkish lives taken by the PKK would amount to some 170,000 American lives taken by terrorists. (As usual, when lost lives are Turkish, they are practically invisible to the West.)

When my country changed history, your country went along for the ride. (Tail-wagging Turkey was also all set to hook up, but democracy kicked in, and the Turkish people correctly said "no." Since then, Turkey has wagged tail less often, which has provided further incentive for Turkey to be regarded as a kind of enemy, in the Western media.) Let us not forget there would have been no ISIS if the USA and the UK did not engage in their illegal invasion of Iraq.

There is now the tendency of depicting Kurds as glorious heroes, given how they have been portrayed in our media in the fight against ISIS, turning a blind eye to the Kurds' own excesses, and depicting Kurds as victims, given the negative image of the Turks in our media and culture. Kurdish-Turks are often portrayed as suffering from discrimination or oppression, which seeks to explain or partly justify the PKK, when the reality is Turkey’s Kurds are equal under the Turkish Constitution. (Of course bigotry exists everywhere, but nondiscrimination has been the operative rule in Turkey. US Rep. Alcee L. Hastings informed, "I've been to Turkey nine times. I've seen there less racism than I have witnessed in Washington. I have seen more racism in Germany and Denmark." Here is an Armenian-produced video exhibiting the Turks' warmth even toward those who portray Turks as inhuman savages.)

At the root of all of this unfairness is a deep prejudice and hostility felt toward Turkish people, an antipathy that has been cultivated for long centuries. These attitudes are deeply entrenched; your prime minister, Lloyd George, felt the Turks were a blight on civilization that must be eradicated (a plan he made good on with the Sèvres Treaty, which was a death sentence). You may notice in articles Turkey is frequently no longer associated with Europe, as it sometimes was in the past; or at least it was associated with the "Near East." Now Turkey is often clumped together with the likes of Iran and Saudi Arabia, in the "them" category (i.e., regarding "Them vs. Us"), as part of the Middle East. Gone is the tiny gratitude that came with how Turkey helped to significantly fend off the Soviets, during the dark Cold War days.

Note the way in which your editors selected the photo of the poor Kurdish girl, accompanying Prof. Stansfield's piece, reinforcing the message of oppression of Kurds at the hands of the Terrible Turk. We definitely have issues with Turkey's increasingly authoritarian leader, but in this case, clearing out forces at the doorstep of one's country that are hostile to one's country is a policy no other nation — if in the same boat — would argue with. If the plan is to repatriate Syrian refugees in Turkey to their own country, while diluting the homogeneous presence of Kurds, what's wrong with that? You do realize Turkey has been doing the world a tremendous favor in housing millions of Syrians at great cost, something it rarely gets credit for. One reason why these Syrian refugees have found themselves in their predicament was because of the meddlesome policies of the USA and the UK. How many refugees have both nations taken in?

Why not support Turkey's goal, instead of making Turkey out to be, as usual, the villain? It is difficult for prejudiced people to be open to the idea, because Turkey has been assigned the perpetual role of the bad boy. Even in Prof. Stansfield's relatively fair article (where he warns of the dangers of the "Kurdish domino," while acknowledging the answers are now "fantastically difficult," since the Pandora's Box was opened primarily by the USA and the UK), we may see where his sympathies lie (the professor seems solidly on the side of the Kurds; even from his headline, he makes no distinction between Kurds, and the terrorists among the Kurds); he almost exclusively gave Kurds the credit for chasing out ISIS, while Turkey's role in the struggle is never mentioned. Here's an article by The Daily Mail showing how ISIS burned alive two Turkish soldiers who were fighting to free Aleppo. (First time we are hearing of it; we see the US media barely made note. This page claims ISIS killed sixteen Turkish soldiers the day before.)

Prejudice is a powerfully potent force. We are still hoping the people at the Guardian will be more respectful toward their journalistic duties requiring impartiality, and strive to rein in their severe anti-Turkish bigotries.

cc: Gareth Stansfield, some of his colleagues from his University of Exeter department, some from the European Journal of Turkish Studies

More in this category: « Turkish-American Taxpayers Criticize US Aid to PYD/PKK Daron Acemoglu Not Offered A Post in Turkish Government »