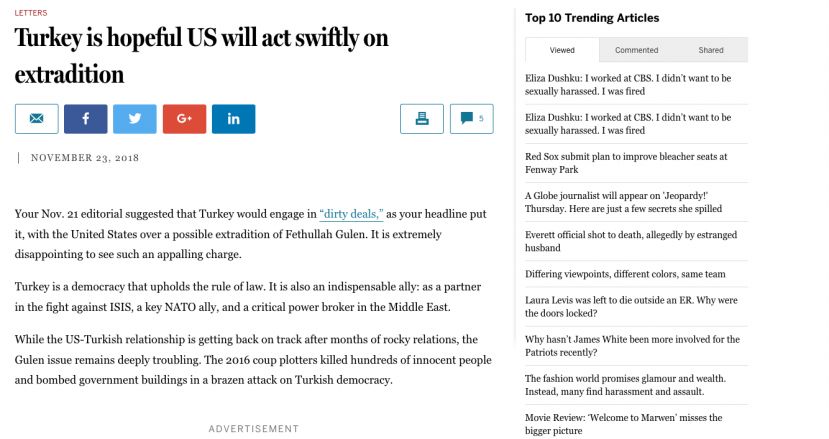 The Turkish American National Steering Committee (TASC) commenced a new program "TASC Media Watch", following misinformed writings by the Boston Globe regarding the extradition of FETO leader, Fethullah Gulen, and by the Armenian Weekly promoting the censorship of free speech that questions the Armenian allegation of genocide.

On November 20, 2018, the Boston Globe had published an article titled, "Fethullah Gulen, a US resident wanted by Turkey, must be protected." In response, both Boston Turkish Consul General Ceylan Ozden Erisen and TASC submitted letters to the Editor. Ms. Erisen's letter was published. TASC’s letter, which was not published, can be read below this article.

On December 11, 2018, the Armenian Weekly published a report criticizing the Cary Memorial Library of Lexington, Massachusetts, which inaugurated a new Turkish library selection. The article, written by AW author Karine Vann, promoted censorship of scholarly and legal material which rebuke the Armenian allegation of genocide. TASC replied and a dialogue with Ms. Vann ensued on TASC's Facebook page (TOA provides a link to TASC’s facebook page).

Letter to the Editor in response to "Fethullah Gulen, a US resident wanted by Turkey, must be protected” (Nov 20, 2018).

Though the Boston Globe may not like Turkey’s current president, that is no reason to give a free pass to a leader of a cult which attempted a coup d'etat that killed hundreds and injured thousands of Turkish civilians on the night of July 15, 2016.

Further, the US DOJ has been unambiguous that it continues to evaluate the evidence for extradition as required by the U.S.-Turkey Bilateral Mutual Legal Assistance Treaty. Based on widely available analyses, it appears that the military personnel who spearheaded the coup attempt were directed by Gulen’s network of interlocutors, and inspired by Gulen's sermons, a modus operandi that reminds us of the terrorists who bombed the World Trade Center in 1993, who were inspired by “The Blind Sheikh" Omar Abdel-Rahman. The United States convicted Abdel-Rahman of seditious conspiracy and sentenced him to life in prison where he died.

Gulen owns no property yet lives at a palatial compound that is heavily armed. In sermons in English for the outside world, he preaches interfaith dialogue and mutual understanding, while his sermons in Turkish to his followers can be unabashedly anti-Semitic. Furthermore, he preaches subversion by infiltration into public institutions.

If the United States is to stand by it principles, it will extradite Gulen so that he can be tried. The Globe must ask itself whether it urges that Gulen be protected because he is a paragon of virtue, which he is not, or because he is an enemy of the Turkish government, which the Globe apparently despises. We think the Globe must transcend the paradigm of transactional justice and support transnational justice, lest it help render the rule of law the child of politics.