The presence of the Syrian Orthodox Church on American soil goes back to the late nineteenth century. There are no records of who the first Syriac person was to arrive on American soil, but it is known of some individuals, such as Dr. Abraham K. Yoosuf, a native of Kharput, Türkiye, who arrived in the United States as early as 1889. Dr. Yoosuf was born on December 12, 1866, and received his higher education at Central Turkey College in Gazi Antep (Aintab), where he graduated in 1886 and worked as instructor until 1889. The same year he came to the USA and worked his way through Baltimore Medical School, graduating with high honors. He then settled down in Worcester, where he began his practice and in 1897 organized and served as president of the Assyrian Benefit Association. Dr. Yoosuf was a prominent figure who played an important role in the life of the Church, people and adopted nation before passing away on December 26, 1924. 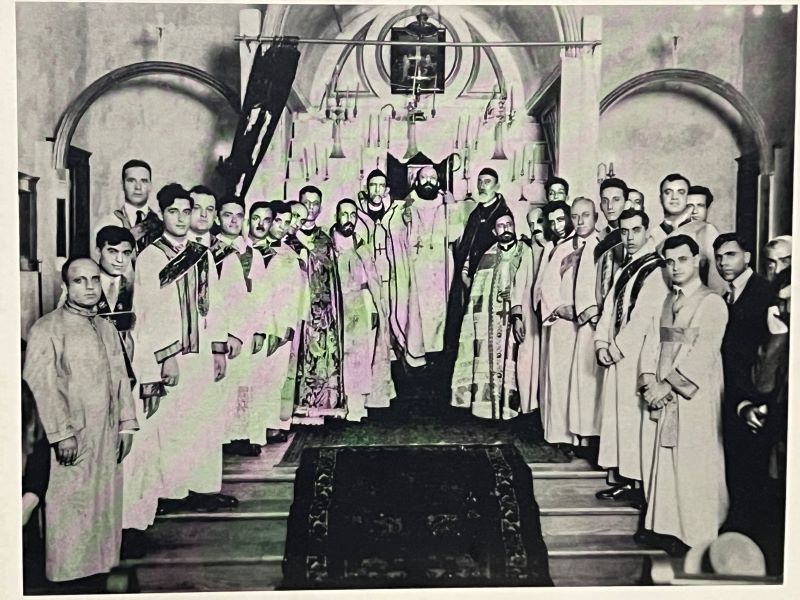 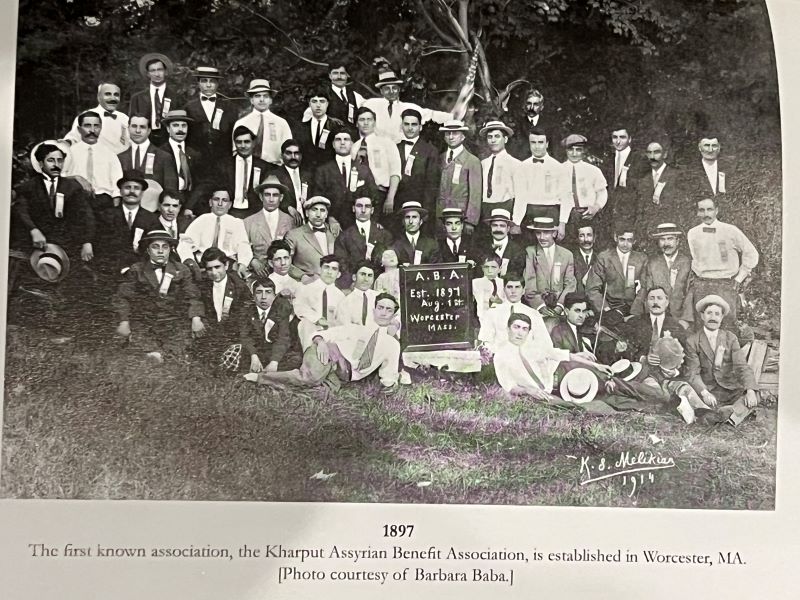 The early immigrants with few exceptions were simple weavers, merchants, craftsmen and farmers by profession and often settled down in different places according to their skills and professions. Those who came from the city of Diyarbakır in southeastern Türkiye, were mostly qualified as silk weavers and settled down in New Jersey, a major area of the silk industry. The families from Kharput (Harput), also in southeastern Turkey, settled mainly in Worcester, Massachusetts. The faithful from the region of Turabdin, also in southeastern Türkiye, established themselves in Central Falls, Rhode Island, as workers in the local mills.

The Early Beginnings: Fr. Hanna Koorie & The Assyrian Church of the Virgin Mary
Hanna Koorie, the son of Khoorie Mirza, a priest in Diyarbakir, Türkiye traveled to Jerusalem to seek priestly ordination. On May 20, 1907, he received the laying on of hands from Archbishop Mor Ivanios Elias Haloulei at St. Mark’s Monastery in Jerusalem. He returned to America in 1907 as the first priest of the Syrian Orthodox Church in the United States and was assigned for the service of the Syriac families of the New Jersey area.
In the spring of 1909, under the spiritual guidance of Fr. Hanna Koorie, the Syriac Ladies Aid Society was formed in order to raise financial means for the first church building. A church was purchased in West Hoboken (now Union City), New Jersey. By 1915 the population of the community reached a point where a new, larger church building was needed. The first Syrian Orthodox church in America was built by the Syriac faithful from the area of West New York, New Jersey. The church was consecrated in April of 1927. The consecration day was a landmark in the history of the Syriac community in America.
The parish eventually relocated to Paramus, New Jersey, as the community built a magnificent new church whose cornerstone was laid on Sunday, September 17, 1967.  In 1928 the number of the Syriac community in North America was estimated to be around 2200 individuals and in 1948 was thought to be around 3000. 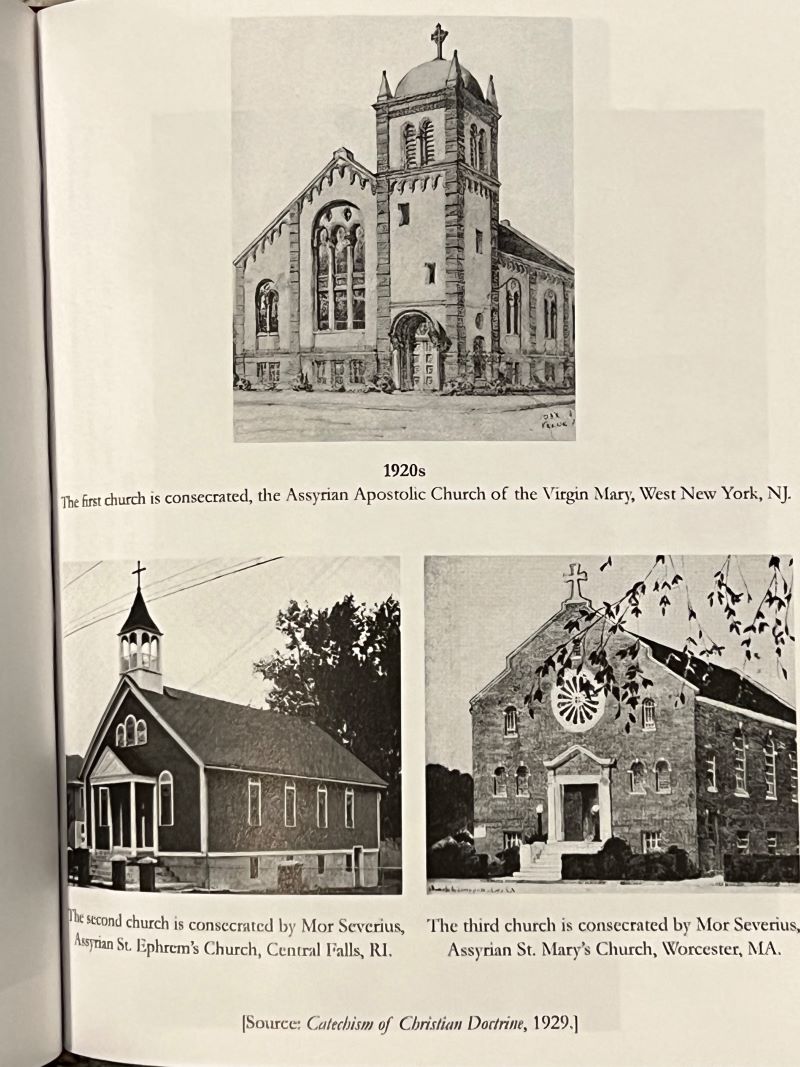 USA and Canada Become a Patriarchal Vicariate
On May 12, 1952, His Holiness Patriarch Ephrem I Barsoum appointed Archbishop Mor Athanasius Yeshue Samuel as Patriarchal Vicar over the United States and Canada. In 1953, the community secured a residence for the Archbishop in Hackensack, New Jersey, and this was officially opened on October 18, 1953. On October 14, 1957, the Holy Synod elected Archbishop Mor Severius Jacob to succeed Patriarch Ephrem I Barsoum as Patriarch of the see of Antioch. His enthronement took place on October 23rd of the same year, and he received the title Mor Ignatius Jacob III.

Creation of the North American Archdiocese
It was under the spiritual leadership of Patriarch Jacob III that the North American Archdiocese for the Syrian Orthodox Church was created. His Holiness, in October of 1957, officially declared the Syrian Orthodox jurisdiction of the United States and Canada as an Archdiocese of the Syrian Orthodox Church of Antioch in the diaspora. This was the first archdiocese to be inaugurated in the New World. Mor Athanasius Yeshue Samuel was appointed as the first archbishop of this archdiocese in 1957.
As a result of the creation of the archdiocese in North America, the Syriac community felt the need for a cathedral for the newly appointed archbishop. Therefore, the community purchased a church in Hackensack, New Jersey, which was consecrated on September 7, 1958, as St. Mark’s Cathedral. In 1994, St. Mark’s Cathedral parish relocated to Teaneck, New Jersey, and the new cathedral was consecrated on December 8, 1996.

The Future of the Syriac Community in North America
After the passing of Archbishop Mor Athanasius Yeshue Samuel in 1995, by a decree of the Holy Synod, the North American Archdiocese was divided into three separate Archdiocesan Patriarchal Vicariates: Eastern United States (including the Midwest), Western United States, and Canada, each with a resident hierarch. Today there are approximately 40,000 Syriac faithful residents in North America that comprise twenty-five parishes.
From the 1960’s through the 1980s, new Syrian Orthodox parishes were established in California, Southfield, Michigan; Chicago, Illinois; West Roxbury, Massachusetts; Portland, Oregon and Long Island, New York as well as in Montreal, Quebec and Toronto and Hamilton, Ontario together with congregations in the Washington, DC area and in Calgary, Alberta, Canada. In 1980, the Archdiocesan residence was moved from Hackensack to Lodi, New Jersey.

* Article was originally written by His Eminence Mor Polycarpos Adib Aydin, and later updated by The American Foundation for Syriac Studies.

More in this category: « Syriacs from Diyarbakır