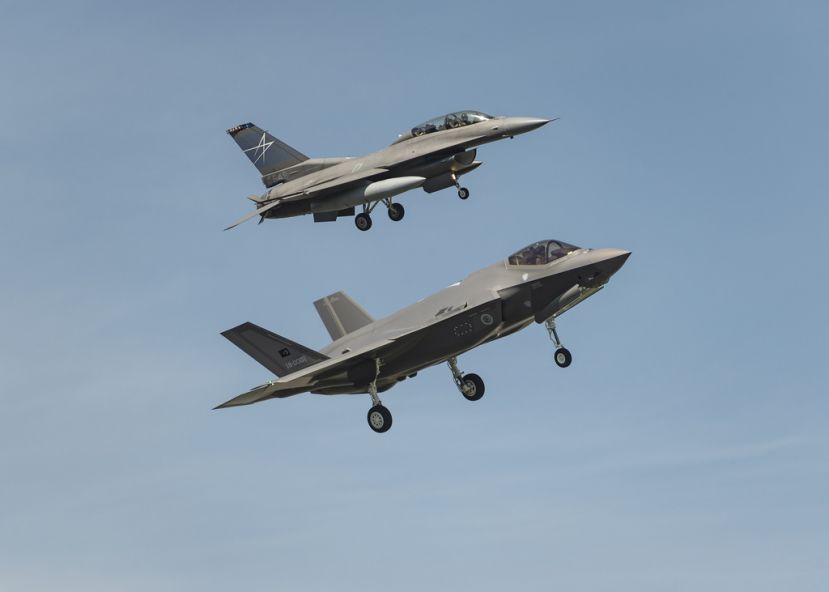 Chased by a LM two-seat F-16 the first F-35A destined to the Turkish Air Force flies over Ft. Worth.

On May 10, 2018, the first F-35A destined to the Turkish Air Force performed its maiden flight  at Lockheed Martin Ft. Worth facility, Texas. Piloted by US Navy test pilot Cmdr. Tony Wilson, the aircraft (serial 18-0001) took off at 14.47LT and landed at 16.00LT. The photo in this post was taken by Highbrass Photography’s Clinton White during Tukey’s F-35’s (designation AT-1) first sortie.Turkey should be officially delivered the first of 100 F-35As on order, on Jun. 21, in the U.S.

Two TuAF pilots are currently being trained in the U.S.; after the training is completed, and another stealth aircraft is delivered, the F-35 jets are planned to be brought to Turkey in September of 2019. The trained pilots will fly the two F-35s from the U.S., accompanied by a refueling plane, the Turkish Anadolu Agency reported.

It looks like the delivery of the first F-35 fighter will take place in spite a number of U.S. congressmen have urged the U.S. administration to suspend the procurement of these fighters to Turkey because of the latter’s decision to buy Russian S-400 advanced air defense systems:  indeed, there’s widespread concern that the Turkish procurement could give Moscow access to critical details about the way their premiere surface-to-air missile system performs against the new 5th generation aircraft. “If they take such a step at a moment when we are trying to mend our bilateral ties, they will definitely get a response from Turkey. There is no longer the old Turkey,” Foreign Minister Mevlüt Çavuşoğlu told private broadcaster CNN Türk in an interview on May 6, according to Hurriyet Daily media outlet. (By David Cenciotti - https://theaviationist.com)