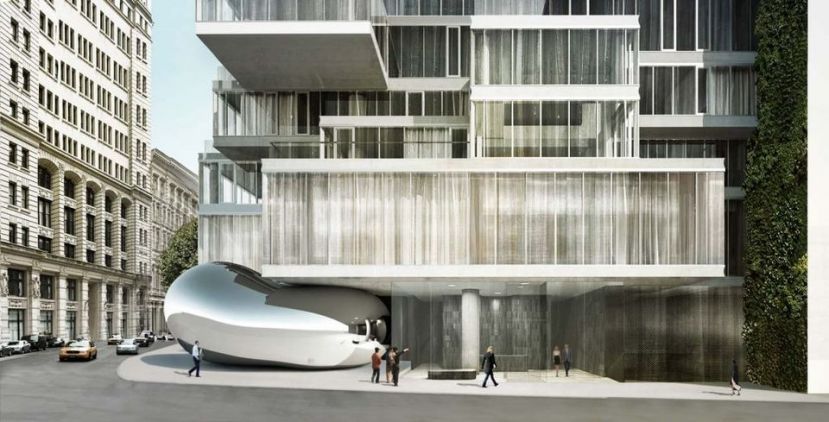 Alexico Group, the development firm behind Tribeca’s 60-storey “Jenga Tower”, a Herzog & de Meuron-designed residential high-rise at 56 Leonard Street, announced that it will start installing a public sculpture by Anish Kapoor commissioned specifically for the building in the second week of November. The “enigmatic balloon-like form” as the developers describe the 40-ton, 48ft-long, 19ft-high work of art in a statement, “will seemingly both prop up the building and be squashed by it”. Jutting out from the base of the tower and onto the sidewalk, at the corner of Church Street and Leonard Street, the as yet untitled sculpture is expected to “become a must-see destination”.

“We are excited to be starting the installation of this work that completes our vision for 56 Leonard in Tribeca and will draw arts and culture lovers to its magical seamless surface,” Izak Senbahar, president of Alexico Group, said in a statement. The path to realising the sculpture has not been easy, however. Designs for the work were first released in 2008, but fabrication was delayed due to challenges in finding a cost-effective way to join the metal sections of the work while ensuring a flawless finish.

The fabricators Performance Structures, Inc, who also worked on Cloud Gate, told the local newsite Tribeca Citizen that the welding and polishing process used for the Chicago sculpture “added a huge amount of time to the installation process, and more than doubled the cost”. The installation of the New York sculpture is also more complicated because its elements are not only bolted to the ground but suspended from the building by a system of springs and cables “so that it will be able to move slightly with changes of temperature and wind and snow loads”.

Similarly silvery sculptures by Kapoor, including a piece that looks like a giant Pringles potato chip, are now on view in a solo show at New York’s Lisson Gallery (until 20 December).

More in this category: « Bango Partners with MobileAction to Boost App Monetization SNC Offers Relief to Employees, Communities During Pandemic »