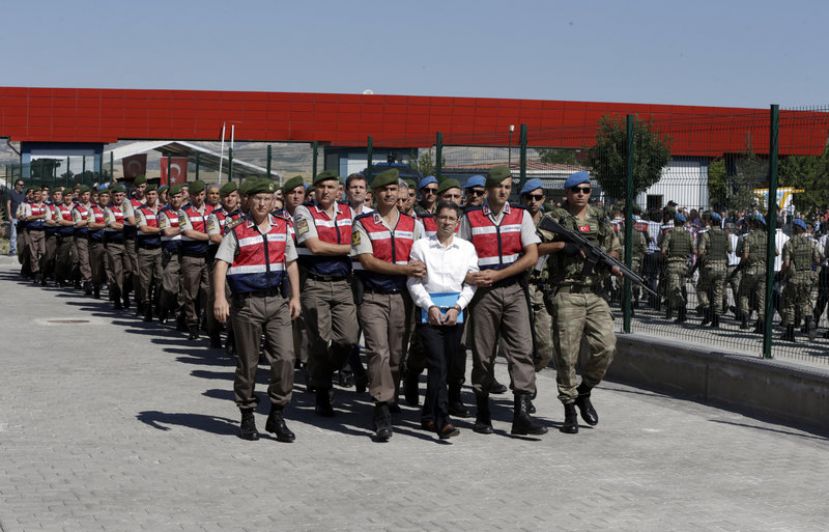 Burhan Ozbilici/AP Paramilitary police and members of the special forces escort unidentified suspects of last year's failed coup outside the courthouse at the start of the trial Tuesday in Ankara, Turkey.

"Being tried in absentia is Fethullah Gulen, a cleric the government calls the plot's mastermind. He lives in the U.S. and denies any role," Lauren added. Of the 486 facing charges now, 461 are currently imprisoned, 18 have been released with judicial supervision, and seven are on the run, the state-run Anadolu news agency reported.

Many of the suspects could face life in prison if convicted, according to The Associated Press.

Turkey doesn't have a death penalty, but as Lauren reported, "People shouted 'Bring back the death penalty!' as defendants filed into court, flanked by Turkish police and soldiers. Someone waved a noose over the crowd."

President Recep Tayyip Erdogan has floated bringing back the death penalty, though Peter reports that the European Union has warned that "such a move would kill off Turkey's bid to join the union."

There are other trials ongoing in Turkey related to the attempted coup, but as the BBC reports, this is the largest one yet. It's expected to continue until Aug. 19, Anadolu reported.

Speaking at an event to mark the first anniversary of the failed coup attempt, Peter reported that President Recep Tayyip Erdogan said, "We will not forget, (and) will not let it be forgotten. ... We do not learn the lessons from July 15, new July 15ths will be inevitable." Erdogan then vowed to "chop the heads off the traitors."

In April, a referendum that passed by a narrow margin radically expanded Erdogan's powers.

More in this category: « Turkcell Marks the 15th Year of its Dual Listing on the NYSE and Borsa Istanbul Teachers Retirement System Of The State Of Kentucky Has Boosted Its Maxim Integrated Products (MXIM) Holding by $1.19 Million as Stock Rose »