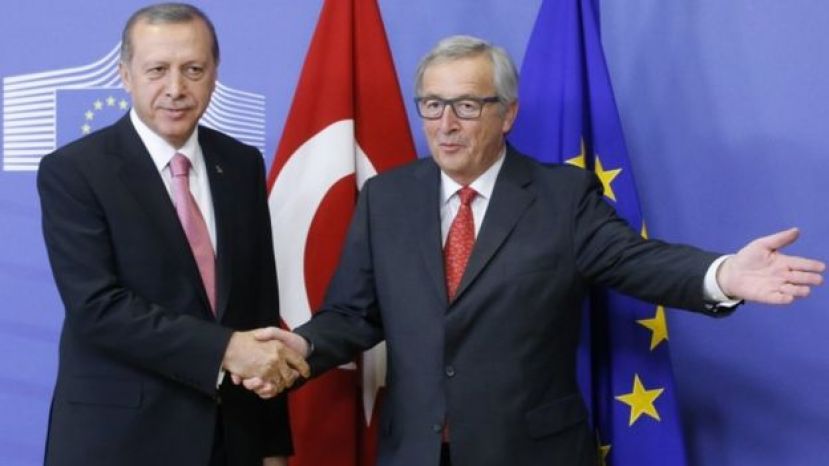 Mr Erdogan, pictured with European Commission President Jean Claude Juncker, told the BBC most Turks did not want the EU

'The EU wastes our time'

"If the EU, bluntly says, 'We will not be able to accept Turkey into the EU' this will be comforting for us..." Mr Erdogan told the BBC.

"The European Union is not indispensable for us... We are relaxed."

Mr Erdogan said the majority of Turks did not "want the EU anymore" and believed its approach to Turkey was "insincere".

"Despite all this we will continue being sincere with the EU for a little more time," he added.
Gulen 'not fleeing'

The president was speaking almost a year to the day since the 15 July attempted military coup. At least 260 people died when rogue soldiers bombed government buildings and drove tanks into civilians.

In the 12 months since then, a state of emergency has been in place across the country. More than 50,000 people have been arrested, and 140,000 dismissed or suspended on suspicion of being linked to US-based Islamic cleric Fethullah Gulen.

The 79-year-old cleric denies Turkey's accusation that he orchestrated the failed coup. However, President Erdogan is seeking his extradition from the US.

Mr Gulen, whose movement is seen by the Turkish government as a terrorist organisation, has told Reuters news agency that "if the United States sees it appropriate to extradite me, I would leave (for Turkey)". He rejected Turkish claims that he was seeking to flee to Canada.

Some 160 media outlets have been closed down in Turkey, and 2,500 journalists or media workers have been sacked from their jobs. According to the Committee to Protect Journalists, Turkey is the biggest jailer of journalists in the world.

President Erdogan disputed this figure, however, telling the BBC: "No-one is jailed because of journalism here."

The 63-year-old said his opponents had "infiltrated the judiciary, military, police and the media".
Qatar: 'We don't want to see Muslim killing Muslim'

Asked about his strong backing for Qatar, which is under blockade from some of its powerful Arab neighbours over its alleged support for terrorism, Mr Erdogan said Turkey wanted to promote "dialogue and peace" in the Gulf region.

"Turkey is never in favour of Muslim killing Muslim in this region," he added.

One of the conditions the Saudi-led group gave for lifting sanctions was the closure of a Turkish military base in Qatar but Mr Erdogan responded by sending more military personnel.

More in this category: « The Failed Coup in Turkey: One Year Later With Virtual Reality Experience US Officials Eject Protesters Who Interrupted Erdoğan’s Speech in New York »