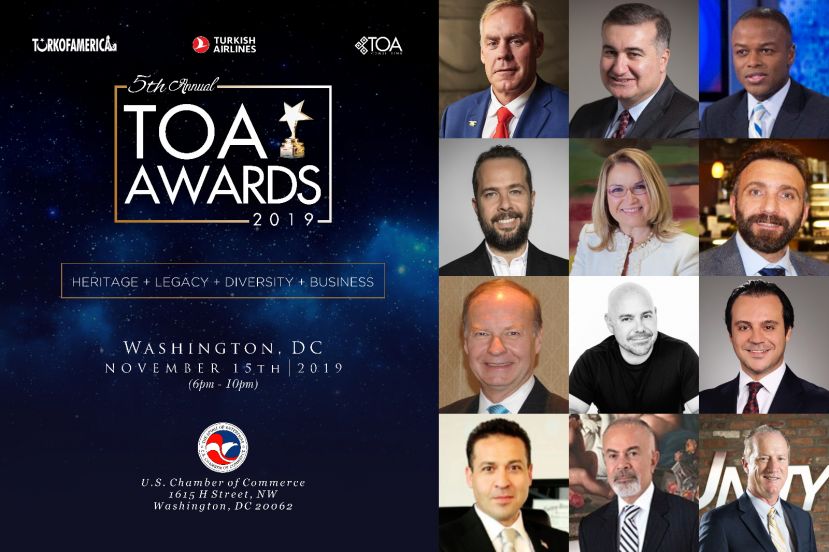 This year’s award winners are among 12 different names such as Ryan Zinke, former United States Secretary of the Interior; Elin Suleymanov, Ambassador of Republic of Azerbaijan to the United States; Kendis Gibson, Emmy award-winning reporter, MSNBC Anchorman; Ümran Beba, Pepsico Inc Chief Global Diversity Engagement & Talent Officer; Murat Özgener, CEO of Oz Arts Nashville, one of Nashville's most popular contemporary art centers; Kemal Erkan, known for his work in the field of electronic medical record and one of the founders of the largest private health network system in Delaware and the Mid-Atlantic region; Dr. Gökhan Gündoğdu, Senior Advisor to Executive President to Atlantic Council and Chairman Gundogdu Foundation; James Hughes, President and CEO of Unity Bank; businessman İzzet Pinto, founder of Global Agency, which exports the most films and TV series from Turkey to the world; G. Lincoln McCurdy, President of Turkish Coalition of America; Mehmet Mustafaoğlu, Founder and CEO of Los Angeles based  private equity firm, Trans Global Financial Corp and first recipient of Ellis Island Medal of Honor, and businessman Mustafa Tuncer, known for his companies in the natural stone, media and retail sectors in the United States.

“WE WILL CONTUNIUE TO EXPAND THE CATEGORIES"
Friends of TURKOFAMERICA special award will be given to the people who have contributed and supported the magazine since 2002. The awards were determined by the TURKOFAMERICA selection committee and presented to the jury members. Last year’s award ceremony was held at the Harvard Club in New York. Thirty Americans who are Turkey friendly were awarded at the ceremony.

Jimmy Cuneyt Gürkan, TOA Consulting Partner stated that the artworks of Hulis Mavruk, Tony Şeker and Esin Kösoğlu would be exhibited before and during the award ceremony, and a portion of the proceeds would be donated to a non-profit institution. Gürkan emphasized that they would hold the award ceremony for the first time this year in a city other than New York, and remarked that they wanted to reach different audiences by spreading the awards ceremonies throughout the United States. Turkish Airlines is the main sponsor of the award ceremony. United Medical, Natural Source Group, Vintage Food and Sarar also supports the event. About 250 people are expected to attend the award ceremony at the U.S. Chamber of Commerce. Ticket information and other details can be found at this link: