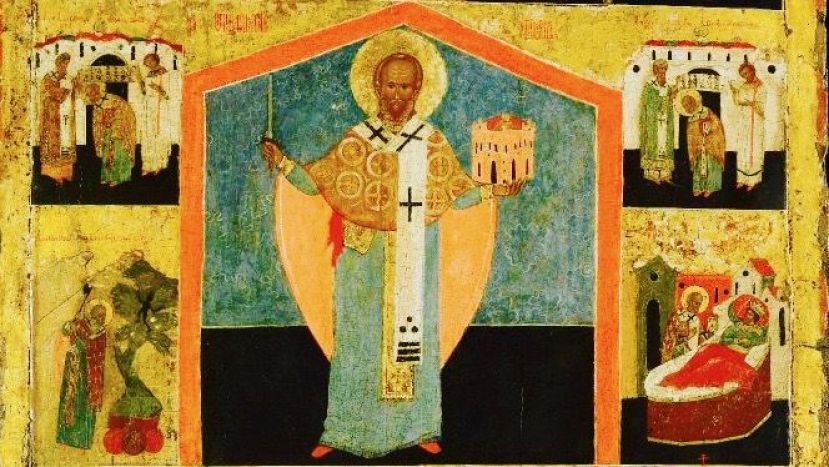 In the year 343, Nicholas died and was buried under the local cathedral. A healing liquid, called manna, was said to form on his grave, and so—according to Catholic tradition—he was celebrated as a saint for the miracles he performed in life and death. Nicholas, the patron saint of children and sailors, offered protection and safe passage on travels, and was exceptionally popular.

Pilgrims came from far and wide to pray where he was buried, according to the Saint Nicholas Center. In 1087, merchants from Bari, Italy took the bones, making their city’s cathedral a popular pilgrimage site. People loved Nicholas and Dec. 6, the saint’s feast day, was celebrated with gifts for kids and acts of generosity.

After the Protestant Reformation of 1517 to 1648, the Catholic saint fell from grace, as it were, in Europe. In France and England, the generous gift-giver Nicholas became Pere Noel and Father Christmas, respectively. Meanwhile, a child symbolizing Christ—the Christkind in Germanic languages—took over Christmas in other countries.

Early Dutch settlers in the American colonies transformed Christkind into Kris Kringle, based on the legend of Saint Nicholas. That new mashup of the saint and Kris Kringle became Sinterklaas, and then eventually Santa Claus over the 18th century as settlers became American. The saint was celebrated under his original name, Nicholas, after 1823 publication of Clement Clarke Moore’s poem “A Visit from St. Nicholas,” or “T’was the Night before Christmas,” in England, describing the generous man delivering gifts with eight reindeer. Now Santa Claus, Saint Nicholas, and Father Christmas are considered one.

Archaeologists in Turkey say this Santa Claus is still with them in Demre, the city that was once Myra. In fact, there seems to be a whole temple intact and underneath the cathedral, and initial analyses with CT scans and geo-radar tools indicate that it contains the tomb of Saint Nicholas, they say.

Director of surveying and monuments for the Antalya district, Cemil Karabayram, told Turkey’s Hurriyet Daily News in October, “We studied all of the documents from between 1942 and 1966. There were some notes there. According to these notes, this church was demolished and rebuilt. During the reconstruction, traders in Bari took the bones. But it is said that these bones did not belong to Saint Nicholas but to another priest.”

Turkish art historian Yıldız Ötüken believes—based on her 20 years of studying the site and the saint’s tomb, and leading the research in Demre—that Nicholas was kept in a special section of the temple. Turkish officials added eight more archaeologists to the Demre temple dig late this year, hoping to confirm this.

It’s slow work. To get to the tomb, the archaeologists must individually remove each stone leading to the temple. The stones contain mosaics that must be preserved. But the researchers believe they’re close. Karabayram predicts, “The world’s eyes will be set on here. We claim that Saint Nicholas has been kept in this temple without any damage. We are at the last stage.”

By Christmas 2018, the mystery could be solved. Christians may travel to Turkey, now a Muslim country, making the pilgrimage of coreligionists past to the place where the beloved Saint Nicholas, aka Santa Claus, is buried. (Source: qz.com)

More in this category: « Pregnant Daphne Oz Shows Off Her 36-Week Bump As She Prepares For the Arrival of Baby Number 3 Peyman Umay, Rising Star of Fashion »