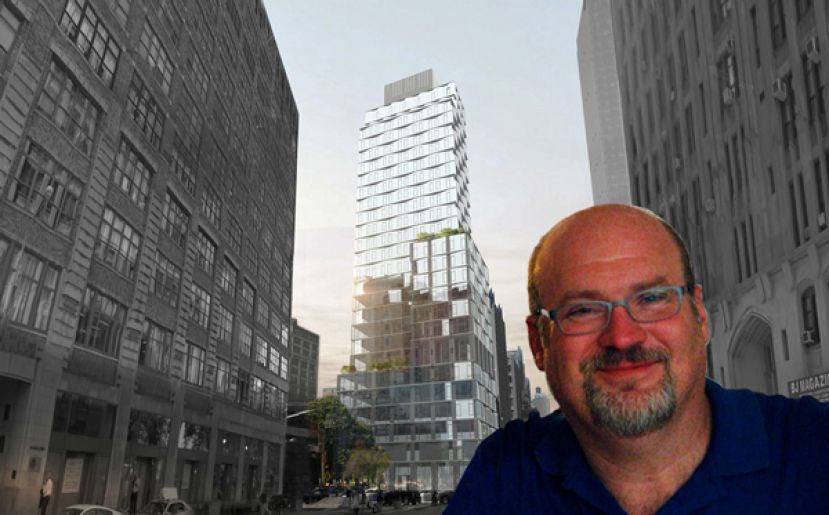 Louis Madigan and a previous rendering of 111 Varick (Credit: Twitter and S9 Architecture)

Developers Madigan Development and Agime Group are wrapped up in court over the future views of luxury condominiums they’re both building in Soho, and on Friday, Madigan sent a pretty clear message to its neighbor that it’s not backing down.

Madigan filed new plans with the Department of Buildings for its 111 Varick Street condo, increasing the future tower’s height to 337 feet. The project would hold 101 residential apartments, including a duplex penthouse on the 27th story. Madigan filed for the new permit despite getting its previous plan approved for construction just this May.

At the time, both Madigan and Agime were planing roughly 290-foot towers, but both companies claimed the other is working to sabotage their future tower’s views.

Madigan maintains that under normal zoning rules Agime should only be allowed to build up to 185 feet, and that a special designation from the DOB allowing Agime to go up to 290 feet is illegitimate. In a lawsuit against Agime, Madigan alleged its rival hired lobbyist James Capalino to “campaign out of the public eye” with the city for Agime.

As for Agime, it sued Madigan in May saying that Madigan’s appeals to the DOB to overturn Agime’s development rights violate a zoning agreement.

Louis Madigan and Agime’s Murat Agirnasli did not immediately respond to requests for comment.

Madigan’s original building plan, filed in 2015, only called for 15 stories. It later modified the application for an increase in height before filing for a new permit altogether on Friday.

In June, Agime filed an offering plan for its condos at 570 Broome Street. The 54-unit development has a projected sellout price of $149 million. (By Will Parker - https://therealdeal.com)