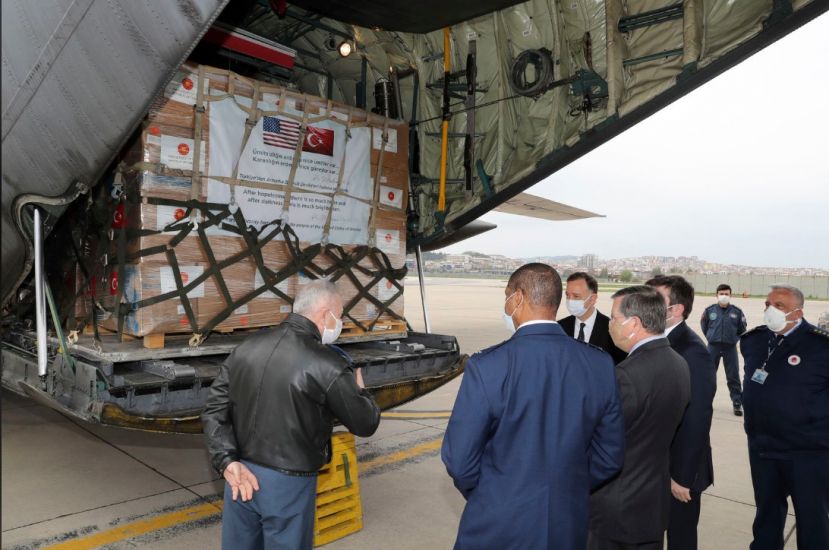 ANKARA, Turkey (AP) — A second Turkish military plane took off from an air base near Ankara on Thursday carrying more medical aid to the United States which has been hit hard by the coronavirus pandemic. The cargo plane is carrying a second consignment of personal protective equipment, including masks, hazmat suits and disinfectants, the Defense Ministry announced. Turkey also dispatched a planeload of medical supplies on Tuesday that included 500,000 surgical masks, 4,000 overalls, 2,000 liters (528 gallons) of disinfectant, 1,500 goggles, 400 N-95 masks and 500 face shields.

The items dispatched Thursday were sent in boxes displaying the words of 13th-century Sufi Poet Jalaluddin Rumi in Turkish and English: "After hopelessness there is so much hope and after darkness there is much brighter sun." The government didn't immediately provide a breakdown of what was in the shipment.

Turkey's deputy foreign minister, Selim Yavuz Kiran, and the U.S. Ambassador to Turkey, David Satterfield, were at the military airbase to see the plane off. Separately, a Turkish military plane carrying medical supplies, including masks and disinfectants, also left for South Africa late on Wednesday, the state-run Anadolu Agency reported.

"Turkey will continue to stand by the Palestinian people," the spokesman, Ibrahim Kalin, wrote on Twitter. "Keep Keep humanity alive so that people can live."

Turkish officials say the country has donated medical supplies to a total of 55 countries — including Britain, Italy and Spain.

Meanwhile, the number of confirmed COVID-19 cases in Turkey surpassed 120,000 after the country's health minister announced 2,615 new cases in the past 24 hours. Fahrettin Koca also reported 93 new deaths on Thursday, bringing the total to 3,174. The total number of infections now stands at 120,204.

Turkey ranks seventh in the world for the number of confirmed infections, according to Johns Hopkins University, although experts believe the actual toll of the pandemic is higher than the tally.