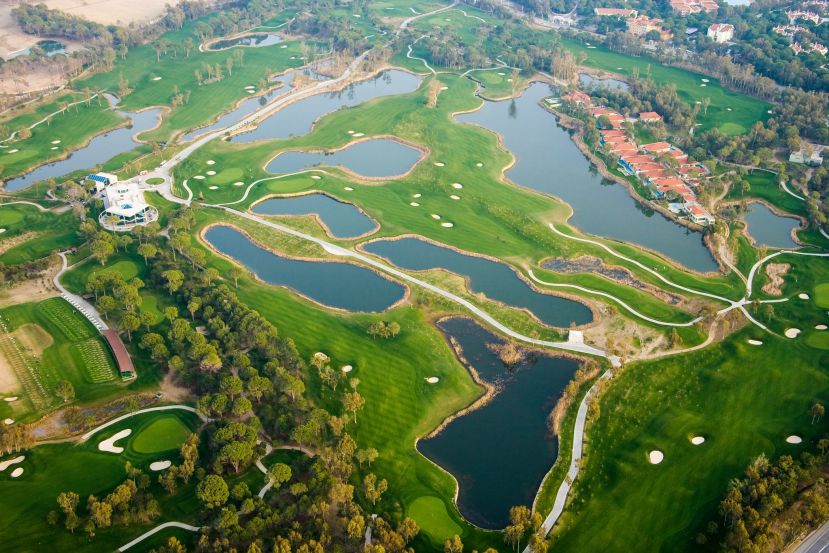 Credit Corbis Documentary, via Getty Images Antalya, on the Mediterranean coast of Turkey, is home to a large concentration of golf courses.

By ADAM SCHUPAKOCT - New York Times- The Turkish Golf Federation president, Ahmet Agaoglu, likes to tell the story of the time Tiger Woods straddled two continents and struck golf’s first intercontinental shot from Asia to Europe. “To play a role in it was the greatest achievement of my life,” Agaoglu said. On Nov. 5, 2013, Woods stopped traffic on the Bosporus Bridge, which spans 5,118 feet and is 210 feet above the Bosporus. Well, at least half of it was closed as Woods stepped to a circular, platform AstroTurf tee. Cars and buses whizzed by in the three lanes on the opposite side of the bridge, renamed the July 15 Martyrs Bridge in 2016, into Europe as Woods, in his trademark Sunday red golf polo, blasted drives from Istanbul in western Asia into the southeastern corner of Europe on a windy afternoon.

“If I lost it to the right at all, I’m hitting some car,” Woods said at the time of the publicity stunt to promote the first Turkish Open. That week, Turkey became the 41st different nation to host a European Tour event. While Woods is still rehabilitating from his fourth back surgery in April and dealing with an addiction to painkillers, the fifth Turkish Open marks another milestone for the tournament, which was selected to be part of the European Tour’s inaugural Rolex Series, a run of eight tournaments where each event has a minimum prize fund of $7 million.

How the Turkish Open came to be is a story in itself. It was the brainchild of Agaoglu, who was elected president of the Turkish Golf Federation in 2000, to promote tourism and spark interest in the game. He credits the tournament with making golf one of the fastest-growing sports in a soccer-mad country.

The number of registered golfers in Turkey has nearly doubled since 2012 to approximately 12,000, according to the federation. By the end of the year there will be 24 golf courses in Turkey, 15 of which are nestled together in Antalya in the region of Belek, close to the Mediterranean Sea, and known as the Turkish Riviera.

“If you took out the fences between them, you could start from the National Golf Club and you could end by Nautilus Golf Club, 15 kilometers away,” said Agaoglu, noting 52 five-star hotels surround the golf courses, and the area is less than a 30-minute drive to the international airport.

“They presumed because it was Turkey it would be a 1 million euro event and we’ll stick them in the middle of March when the best are off competing in Florida,” Chandler said.

A friend of Chandler’s working in Turkey made the introduction to the Turkish Golf Federation and when Chandler heard its vision — and $10 million to $12 million budget — he hopped on a plane the next day.

“Well, you would, wouldn’t you?” Chandler said.

He pitched them on creating something different from the typical 72-hole stroke-play event — an elite eight-man field modeled after the ATP Tour Finals, in which the players are divided into two groups of four and compete in a round-robin match-play format with the players with the two best records in each bracket advancing to the semifinals for a knockout round. A deal was struck, but Chandler’s assignment got a bit more complicated when one final stipulation was added.

“As I walked out of the meeting, they said, ‘We must have Tiger Woods,’ ” Chandler recalled.

The explanation for the deal breaker was simple, Agaoglu said. “Ask anyone on the street in Turkey, ‘What do you know about golf?’ Basically you will get the answer, ‘We know Tiger Woods,’ ” he said.

Chandler contacted Mark Steinberg, the agent for Woods, who cut him a deal on Woods’s appearance fee, though Steinberg characterized the payment as “fair market value.” Agaoglu said Woods was paid $2.3 million, and “you get it back more than 100 times,” noting that the intercontinental shot the following year generated the type of exposure around the world that can’t be bought.

Including Woods, five of the top eight players in the official world golf ranking showed up — including Rory McIlroy, Lee Westwood and the eventual champion, Justin Rose, with Luke Donald the highest-ranked player passing on the minimum $200,000 payday — to play in the World Golf Final for a first prize of $1.5 million from a total purse of $5.2 million.

Interestingly, because the tournament wasn’t sanctioned by the PGA Tour and conflicted with the Frys.com Open, “the Turkey Eight,” as they came to be known, had to be granted a release and agree to play there during one of the next three years. (Because of an injury, Woods still hasn’t fulfilled his obligation.)

In short order, Turkey’s entry on the golf calendar was elevated to official status. Barclays, the British bank and financial services company, dropped its sponsorship of the Singapore Open and that created an opening in the 2013 European Tour’s schedule for the Race to Dubai. Turkish Airlines and the Ministry of Culture and Tourism agreed to underwrite the $7 million purse and the following year it became an official stroke-play event with a 78-man field. The event was slotted into the schedule in early November to accommodate Woods, who finished in a tie for third.

This year, two of golf’s three Olympic medalists — Sweden’s Henrik Stenson and England’s Rose, who won gold — are scheduled to appear at Regnum Carya Golf & Spa Resort. The American Matt Kuchar, who won bronze, withdrew from the tournament after diplomatic issues arose between the United States and Turkey.

“The Turkish people may not know much about golf but they know all about Olympic medals,” Agaoglu said.

Which means the medalists should turn heads if not stop traffic.

More in this category: « German Tourist Arrivals in Turkey Seen Rising 15-20 Percent in 2018 Visit Istanbul Will be Istanbul's Open Door to Tourism »